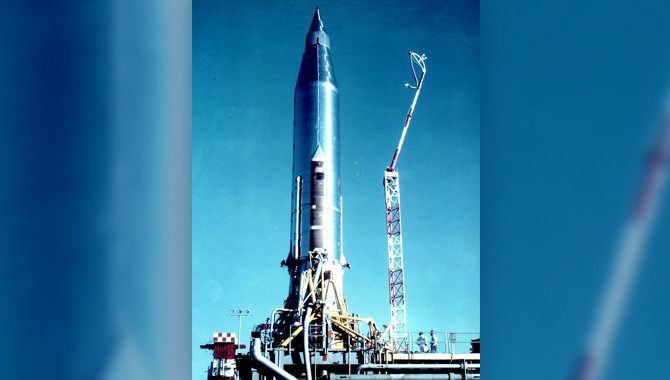 The Atlas B on the launch pad. The SCORE communication package was housed in the rocket’s fairing pods.

On December 18, 1958, a top-secret mission rocketed into space from Cape Canaveral, Florida. One day later, its success was broadcast around the world.

To outsiders, the Signal Communication by Orbiting Relay Equipment (SCORE) project looked like a routine suborbital missile test. For five months, Florida’s Space Coast had hosted a series of Atlas B intercontinental ballistic missile (ICBM) launches. They weren’t going as well as hoped. Several had failed, and only one had traversed the full range of the missile testing ground.

The Atlas failures were only a part of the challenges facing the U.S. in its race to space against the Soviet Union. By mid-1958, the Soviets had successfully launched three sizeable Sputnik satellites into orbit. With those launches, they established their ability to reach U.S. soil with nuclear weapons sent from Europe. During the same time period, the U.S. launched a few, considerably smaller, satellites into orbit. The launch vehicles used for those satellites were not capable of delivering larger payloads, such as long-range missiles. As a result, many felt the safety of the nation rested on the success of the Atlas ICBMs.

On December 18, when the SCORE project’s Atlas B took to the skies, a lot was riding on the launch. But it appeared to fail almost immediately. From far down the missile range, engineers observed that the Atlas had veered considerably off course. Alarmed, because an off-target missile is a significant safety hazard, they signaled the Range Safety Officer to destroy it. The officer ignored the signal and the rocket surged forward.

That officer was one of only 35 people in the world who knew the true mission behind Project SCORE. Far from being a routine test, SCORE had two critical objectives. The first was to send an Atlas ICBM into low Earth orbit (LEO), which had never been done before. Demonstrating this capability would put the U.S. on equal footing with the Soviets from a defense perspective. The second objective was to launch the world’s first communication satellite.

The concept of communicating across the globe via satellite wasn’t new. The idea was first proposed by science fiction writer Arthur C. Clarke, who believed that a group of Earth-orbiting satellites could send information securely over large distances. But technology wasn’t advanced enough to pursue his notion at the time. Until the late 1950s, long-distance messages could only be conveyed in two ways: radio signal or transatlantic cable. While radio signal was fast and effective, its ability to reach remote locations was extremely limited. A satellite, in contrast, could potentially relay a message to anywhere on Earth.

The directive to pursue the world’s first communication satellite came from the newly established Advanced Research Projects Agency (ARPA, renamed DARPA in 1971). In June 1958, ARPA tasked the U.S. Signal Research and Development Laboratory (SRDL) in Fort Monmouth, New Jersey, with developing a space-based communication package. The project was shrouded in secrecy. Only 88 people were told of its existence, and they were under strict orders not to breathe a word to the media, their co-workers, or even their families. Given the highly publicized Atlas failures and the unproven nature of the communication technology, the attempt at orbital flight and space-to-Earth communication was to remain under wraps till launch. If the mission was successful, the world would be told. If not, no one would ever know Project SCORE existed.

Beyond the burden of secrecy, the project faced multiple challenges. The SRDL team needed to develop a communication system that would not only work effectively but could withstand the extreme conditions of launch and space. This had never before been achieved. The payload itself could not weigh more than 150 pounds, or the Atlas vehicle would be unable to carry it into orbit. Operational ground systems had to be established to interact with the communication payload and operating crews for those stations had to be trained. Finally, all of this had to be accomplished within six months.

After months of effort, the SRDL produced a battery-operated UHF communication system that would last roughly three weeks in orbit. It consisted of a receiver, a transmitter, and a continuous-loop tape recorder capable of recording a message or playing one back for four minutes in total.

Four ground stations were established. Located in Arizona, California, Georgia, and Texas, each station was equipped with a quad helix tracking antenna mounted on a searchlight base to communicate with the satellite. All four stations were connected to the SRDL control center at Fort Monmouth, and each could issue commands to the satellite to play a stored message, record a new message, or relay a live message from one ground station to another.

In a unique departure from previous satellite missions, the SCORE communication package was not developed as a discrete spacecraft. Instead, the package was built right into the Atlas’s fairing side pods, which also housed the rocket’s control systems. After liftoff, the entire rocket body would climb into LEO and remain in orbit, enabling the communication system to receive and transmit messages until the rocket’s orbit degraded and it reentered Earth’s atmosphere.

The communication system was designed to serve several functions. On the surface, its purpose was to transmit a pre-recorded message that could be received by anyone on Earth with a shortwave radio. Less overt was its secondary function of receiving and transferring messages between SCORE ground stations. For the pre-recorded message, the plan was to have a member of the SCORE team dictate a historical text into both the primary recorder and the back-up system. This was done and the package was sealed into the rocket’s fairing pods.

A few days before launch, this plan was scrapped. Instead, ARPA Director Roy Johnson scored a success for the project: he convinced President Dwight Eisenhower to record a message of peace to the world. Eisenhower was a strong proponent of the U.S. space program. Just months earlier, he had signed legislation authorizing the creation of NASA. Grappling with the Atlas failures and the country’s significant lag behind the Soviet Union in terms of space-based capabilities, the president agreed to record the message but was concerned about maintaining its secrecy. Initially, this wasn’t a problem: his message was delivered to Cape Canaveral on December 17. However, by that time the Atlas missile was already on the launch pad, fueled and ready to go, with the original message sealed in its fairing. The new message would have to be transmitted to the communication system in the rocket by radio signal. If intercepted, that signal would expose the top-secret project to the world. Fortunately, the message was sent and successfully transferred onto the primary recorder and the back up.

On December 18, at 11:02 p.m. EST, the 80-foot, 8,750-pound Atlas B roared into the sky. At that moment, only 35 people in the world knew its true mission. Of the original 88 people involved, 53 were subsequently misled into believing that the mission was canceled. Like the rest of the world, they thought the launch was simply another missile test. It was only when the rocket veered from its presumed course and headed toward LEO that the real primary objective was revealed. For the first time in history, an Atlas ICBM reached orbit.

The second objective proved more elusive. During the satellite’s first transit over California, the local ground station signaled the communication package to broadcast President Eisenhower’s message. Nothing happened. The tape recorder jammed and the primary system failed. It wasn’t until the the thirteenth orbit, on December 19, that a ground station sent a command to the back-up system—and the system responded.

“This is the President of the United States speaking,” the recording stated. “Through the marvels of scientific advance, my voice is coming to you from a satellite circling in outer space. My message is a simple one. Through this unique means, I convey to you and to all mankind America’s wish for peace on Earth and goodwill toward men everywhere.”

Around the world, people with shortwave radios listened to President Eisenhower’s voice as it reached them from space. The message was later shared with everyone else when the broadcast was featured on TV. The first satellite communication system was a global triumph.

That wasn’t the project’s only success. Altogether, Project SCORE produced a significant series of firsts for the nation. In addition to serving as the first practical demonstration of a long-range satellite radio-relay system, it showcased the first successful trial of an Atlas launch vehicle: a vehicle that would go on to send the first Americans into space during Project Mercury. At 8,750 pounds, the Atlas was the heaviest object to be launched into orbit. It was also the first time a missile-guidance system was used to steer a satellite into orbit. Finally, SCORE was the first ARPA project, confirming the utility of the newly formed organization.

Over the course of the mission, 78 real-time and store-and-forward transmissions were sent between the four ground stations. Twenty-eight separate messages were played back for a total of five hours and 12 minutes of operation. Eleven real-time message were conveyed over more than 2,982 miles. Twelve days after launch, the batteries in the system died. On January 21, 1959, the satellite burned up as it reentered Earth’s atmosphere. By then, the secret mission was known to all and its success was celebrated around the world.

Fifty years after President Eisenhower’s holiday message was sent from space to Earth, the recording was added to the National Recording Registry by the Library of Congress. With this act, the message of SCORE was preserved for future generations.

Read about President Eisenhower’s Christmas message in the National Archives.

Listen to “President’s Message Relayed from Atlas Satellite” from the National Recording Registry.