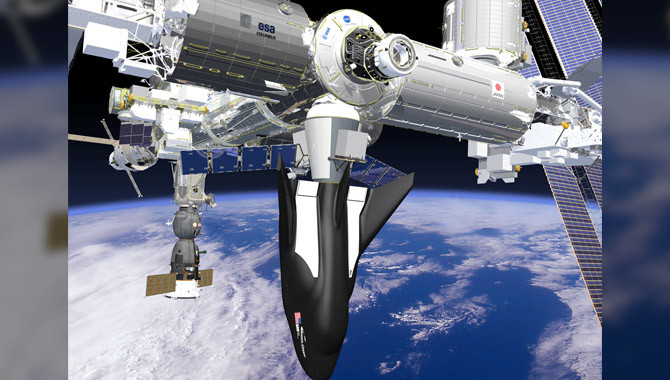 Sierra Nevada Corporation’s Dream Chaser spacecraft and cargo module, shown here attached to the ISS, will begin transporting cargo to and from the space station as early as 2019.

For more than 15 years, the ISS has served as a state-of-the-art laboratory for scientific exploration that benefits the lives of people on Earth while advancing knowledge that contributes to manned exploration beyond low Earth orbit (LEO). The space station’s National Laboratory hosts a diverse range of research conducted by non-NASA organizations, including other federal agencies, private industry, and academia. At the same time, the agency’s ISS-based One-Year Mission continues to rigorously investigate the impact of long-duration spaceflight on human physiology, advancing NASA’s journey to Mars.

“Every day, NASA and our partners conduct extensive scientific research onboard the International Space Station,” said Julie Robinson, ISS Chief Scientist at Johnson Space Center (JSC). “But that research needs to be delivered to the space station—and in some cases, returned to the scientists back here on Earth. We rely on commercial resupply service providers for that transportation.”

To ensure that transportation is available when needed, the agency recently awarded three new commercial CRS contracts—known as CRS-2—to move cargo to and from the ISS. By contracting out transportation services in LEO, the agency is able to stay focused on advancing human spaceflight farther into space. Meanwhile, the contracts will facilitate critical science and research on the orbiting laboratory as they further validate the utility of the commercial market in LEO.

“Seven years ago, when NASA announced the first ISS cargo resupply contracts with Orbital and SpaceX, we introduced a new way of doing business that takes advantage of the strengths of the American aerospace industry and the fixed-price commercial services contracting,” said Sam Scimemi, ISS Division Director at NASA Headquarters. He added, “Commercial cargo, along with commercial crew, are major elements in enabling the growth of low Earth orbit commercial market opportunities, both on the supply and the demand side.”

Orbital ATK, Sierra Nevada Corporation, and SpaceX each received CRS-2 contracts for missions to and from the ISS between 2019 and 2024. These follow up on the CRS-1 contracts, which have so far provided more than 35,000 pounds of research, crew, and maintenance hardware to the ISS. The CRS-2 contracts build on the original contracts by including new requirements that expand options and enhance flexibility.

“CRS-2 vehicles allow the delivery of larger amounts of cargo in a single flight. Basically, it’ll reduce the total number of missions,” said Kirk Shireman, ISS program manager at JSC. “That’s important for a couple of reasons. One, it’s more important in terms of our crew time, and that’s a precious resource aboard the ISS. When the crew’s unpacking and repacking cargo, that’s time they’re not spending doing the research. Also it’s important because comings and goings of vehicles is really time intensive.”

The new contracts will enable different types of missions, providing greater flexibility to meet the specific stipulations of NASA as well as non-NASA researchers using the ISS National Laboratory. The contracts will support ISS-based science, research, and technology demonstrations by delivering needed cargo to the space station, disposing of unwanted cargo, and returning research samples and other items back to Earth. Each contract is unique, so that NASA can select missions from those contracts that best meet the agency’s needs at a given time. Capability requirements for cargo transport include 2.5 to 5 metric tons of pressurized mass going to the ISS and the same for mass returning from the space station. The contracts also stipulate the need for unpressurized up-mass and disposal capability.

“The new requirements will ensure the companies chosen for CSR-2 will maintain the flexibility required to meet the demands of space station research, including the ability to continue to fly unpressurized payloads—things like the Bigelow Expandable Activity Module or BEAM, going up later this year—and various Earth-observation instruments—like the International Space Station-RapidScat, an instrument looking at winds—as well as maintaining the ability to return research samples and hardware back to Earth,” said Robinson. “The option to provide an accelerated pressurized return as part of any standard mission, which means that a sample return could be in three to six hours after landing, instead of 24 hours, is a huge advance for a number of different research disciplines and one potential service about which we’re really excited.”

“It’s very important that we continue the work we’re doing on ISS, and these contracts will enable us to do that,” Shireman stated.

Robinson agreed. “We—and that is the scientific community that’s not limited to just space science, but extends to physical science, biological science, Earth science, astrophysics, and more—we learn every day from the research conducted on the space station. And we use that knowledge in ways that benefit humanity. Some benefits are immediate and tangible right here on Earth, and some pay dividends by enabling us to continue exploration, moving humanity deeper into space and inspiring us all.”

Read an APPEL News article about the diverse range of research conducted on the ISS.