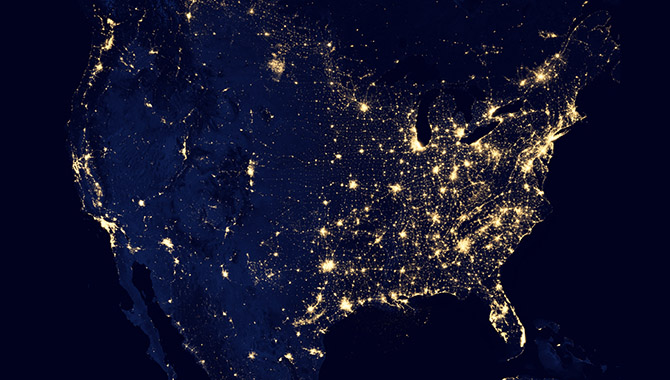 Composite image of the U.S. from space based on data compiled by the Suomi NPP satellite in April and October 2012.

NASA Administrator Charlie Bolden underscored the intertwined futures of America and its space agency in his State of NASA address on February 9, 2016.

“If you take a step back for a moment and reflect on what NASA’s work means to our everyday lives here on Earth, it’s very clear to me that every American benefits in some way from NASA’s Journey to Mars,” he said. “As we speak, there are Americans who are working today in virtually every state in jobs that are funded by NASA investments.”

This impact is increasingly felt as NASA works with private industry to expand commercial aerospace opportunities. “Our commercial partners are transforming the U.S. space industry, opening up new markets and reducing the costs of space travel,” he said. These efforts will continue to grow because “more venture capital was invested in America’s space industry in 2015 than in all the previous 15 years combined.”

The agency’s influence goes beyond the space industry. NASA-driven advances in medicine, GPS, food safety, satellite communications, and other innovations have long improved life on Earth. “Think of what it means to a community when NASA technologies are used to purify their drinking water or listen for beating hearts in the rubble after a natural disaster,” Bolden said.

Looking to the future, NASA will continue to have a positive effect on generations of Americans to come. Sustained by the agency’s efforts, “our children and grandchildren [will] breathe cleaner air, drink cleaner water, go to work in good jobs alongside Americans of all genders, races, sexual orientation, ethnicities, and geographic and economic backgrounds in jobs supported by NASA’s work.”

This vision of America, and NASA’s role in making it happen, is a shared one, Bolden stated. Elected officials “believe in NASA’s Journey to Mars and recognize that investments in NASA’s present are investments in America’s future.”

Even as NASA’s Earth Science and other divisions continue their efforts to improve life on Earth, the agency remains focused on robotic and manned deep space exploration. Work on the Space Launch System (SLS) and the Orion spacecraft is progressing as Exploration Mission 1 (EM-1) approaches. A second series of SLS engine tests lies ahead in 2016, while the Orion crew module is moving forward at Kennedy Space Center (KSC).

Initiatives to advance the agency’s Journey to Mars are being conducted off-planet as well. On the International Space Station (ISS), the novel One-Year Mission—in which astronaut Scott Kelly and cosmonaut Mikhail Kornienko became the first people to spend 12 months on the station—is drawing to a close, but the analysis of the data from that mission and its implications for future long-duration human spaceflight will continue. Meanwhile, in the coming year the ISS will host tests on an expandable space habitat that could contribute to the development of living quarters for astronauts during long-duration deep space missions.

“[W]e are closer today than ever before in human history to sending American astronauts to the red planet,” said Bolden. Progressing along the path toward Mars will enable the agency, the nation, and the world to answer some of the biggest questions about our existence, including whether humans are alone in the universe.

“The state of our NASA is as strong as it’s ever been,” he concluded. The agency is engaged both on Earth and in space with domestic and international partners from the private and public sectors to advance science and technology in ways that serve Americans today and clear a path toward greater exploration in the years to come. “While our future is unknown, we can say with a great deal of certainty that investments in NASA’s today are investments in our children’s and grandchildren’s tomorrow.”

Watch a video about key NASA accomplishments over the past year.