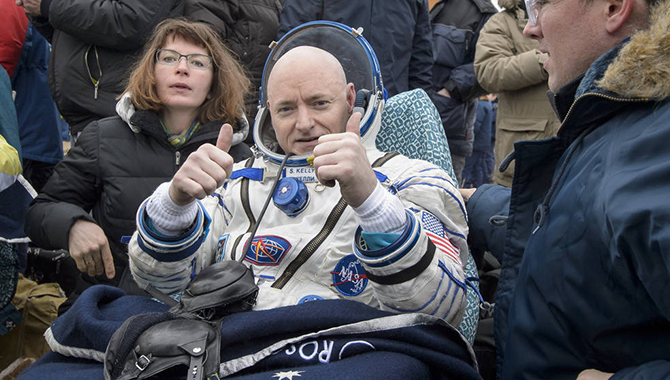 Scott Kelly, the first NASA astronaut to spend 12 months in space, shows the world he arrived home safely just moments after returning from the One Year Mission on the International Space Station.

As NASA forges ahead on the journey to Mars, it is supported by the National Academies in investigating human health risks associated with manned deep space exploration.

To reach Mars, the agency is developing a diverse range of capabilities that will support human spaceflight beyond low Earth orbit (LEO). The Orion spacecraft, which will be the first vehicle to carry humans into deep space in more than 45 years, passed a critical milestone in September 2015: Key Decision Point C (KDP-C). The Space Launch System (SLS) is surging ahead with the recent hot-fire test of the RS-25 flight engine and the upcoming cold-temperature qualification test of the five-segment solid rocket booster. In LEO, the agency recently concluded the International Space Station (ISS)-based segment of the One Year Mission, in which NASA astronaut Scott Kelly and Russian cosmonaut Mikhail Kornienko became the first people to spend 12 months on the station. During their mission, they participated in multiple studies, including 18 conducted through NASA’s Human Research Program (HRP) that were designed to advance understanding of the human body’s response to prolonged weightlessness. This information will inform future manned deep space endeavors.

The One Year Mission isn’t the only NASA investigation into the health risks associated with spaceflight. Data derived from every human research investigation is crucial in advancing the agency’s potential for crewed long-duration missions. As Julie Robinson, chief program scientist for the ISS, said, “[E]very astronaut that flies essentially is part of a broader experiment. So astronauts that have left the agency come back, year after year, [to] participate in something we call the long-term study of astronaut health. Because not every effect is going to happen right away.”

To answer questions about what happens to the human body in space, and to determine how to mitigate health risks to astronauts headed for Mars and other destinations beyond LEO, the HRP has developed a research-based roadmap for assessing and addressing the risks to human health posed by deep space missions. The initial part of this map consists of evidence reports that explore a wide range of potential areas of risk. To establish the validity of these reports, in 2008 NASA solicited the support of the Institute of Medicine, now known as the Health and Medicine Division (HMD) of the National Academies of Sciences, Engineering, and Medicine. The HMD recently released the Review of NASA’s Evidence Reports on Human Health Risks: 2015 Letter Report. The 2015 report is the third of five proposed reviews of NASA’s evidence reports on health risks associated with long-duration human spaceflight. The current publication is based on findings from a 14-member committee, whose expertise spanned aerospace medicine, occupational health, human performance, and other critical areas. The committee was tasked to review each report to assess its quality, identify any gaps in content, and determine whether additional sources of expert input would be of value. They examined seven evidence reports, which explored increased risk to human health and performance due to reduced muscle mass, strength, and endurance; reduced aerobic activity; re-exposure to gravity after spaceflight; extravehicular activity (EVA) operations; decompression; an inadequate food system; and inadequate nutrition.

The committee concluded that the agency’s evidence reports offer thorough reviews of the risks for each topic. They commended the agency on its ongoing commitment to improving the quality of the reports, while noting that there remains some variation in format and the quality of the writing within each report. The committee suggested that the reports include input from individuals with more diverse expertise, as well as from authors who are not directly affiliated with NASA. Ultimately, they concluded that the evidence reports support improved human health and performance as NASA advances along the journey to Mars.

NASA Administrator Charlie Bolden has said that partnerships, including those with other space agencies, are critical elements in the journey to Mars. The partnership between NASA and HMD in reviewing the evidence reports that set forth key risks associated with human spaceflight is another meaningful example of the importance of cooperation in paving a path toward the red planet.

Learn more about the agency’s journey to Mars.

Watch the first hot-fire test of the SLS’s RS-25 flight engine. The next time this engine is fired, it will propel astronauts into deep space.