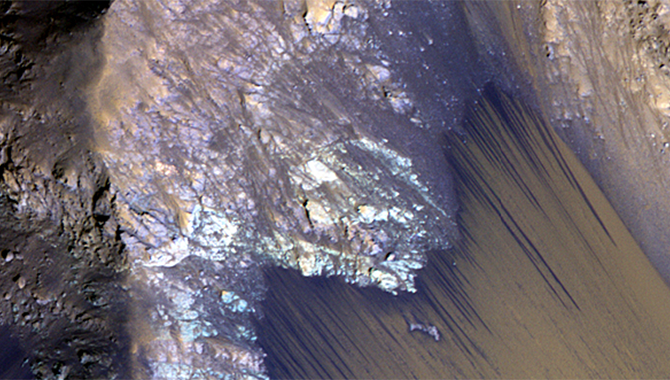 This image depicts seasonal water flows, known as recurring slope lineae (RSL), on a steep slope of the Valles Marineris on Mars. The presence of water, such as RSL, qualifies a Martian region as "uncertain" or "special," indicting the potential for terrestrial organisms to proliferate.

NASA’s journey to Mars includes robotic exploration of the red planet as well as eventual crewed missions. For both approaches, planetary protection is a critical issue.

The international planetary protection policy is intended to limit the potential for biological contamination of Earth and other planets. To accomplish this, the Committee on Space Research (COSPAR) of the International Council for Science offers specific guidelines on the design, development, and operation of spacecraft and missions headed for Mars. In particular, COSPAR provides a definition for areas on Mars called “special regions,” where terrestrial life may have the potential to proliferate if introduced.

As the consequences for cross-contamination are dire, the need for a clear understanding of what these “special regions” are and where they may be located is crucial for interplanetary safety and preservation. To facilitate this, in 2013 the Mars Exploration Program Analysis Group (MEPAG) established the Special Regions Science Analysis Group (SR-SAG2) to update the definitions and guidelines so that they reflect the latest knowledge concerning biology and the Mars environment. This report was completed in October 2014, but before it was published both NASA and the European Space Agency (ESA) took steps to have the SR-SAG2 report reviewed independently. They called on the National Academies of Sciences, Engineering, and Medicine and the European Science Foundation to work together in doing so. In response, these organizations established the Committee to Review the MEPAG Report on Mars Special Regions.

The committee reviewed the SR-SAG2 report in light of current understanding about biology and Mars. Their conclusions and recommendations are captured in a publication from the National Academies: Review of the MEPAG Report on Mars Special Regions. In it, they concurred with 29 of the 45 findings in the original report. Of the remaining SR-SAG2 findings, the committee did not support one (Finding 3-14) and proposed modifications to 15 others. For example, the original report provided physical parameters for indicating a “special region”: an area that exhibits the presence of water activity to a sufficient degree (0.5 to 1) in which the temperature is warm enough for terrestrial organisms to proliferate (-25 degrees Centigrade and higher). The committee agreed with this approach but suggested adding methane sources to the criteria, as these may facilitate biogenic activity.

The committee offered several cautions concerning “special regions.” They noted that maps should not be relied on to pinpoint exact “special regions” on Mars. Instead, if a landing site is considered in the future, it should be examined on an individual basis at that time to determine its suitability and potential for enabling the proliferation of terrestrial organisms. In addition, specific terrain currently identified as “special regions” may be better termed “uncertain regions” until more is known. Should a particular region be targeted for a future mission, at that point it should be reevaluated based on the most up-to-date understanding of the area to determine whether it warrants the designation “special region.”

Other “uncertain regions” specified by the committee include recurring slope lineae, which were confirmed last summer and are believed to be formed by briny liquid water seeping through the surface of the planet; gullies (and bright streaks associated with them); pasted-on terrains; and caves and certain other areas below the surface.

The committee recommended continuing the practice of revisiting the definitions and locations of Mars “special regions” every two years and noted that, currently, there are no “special regions” suggesting the presence of martian life.

Read the full report: Review of the MEPAG Report on Mars Special Regions.

Explore an APPEL News article about the discovery of recurring slope lineae, which confirm the presence of liquid water on Mars.