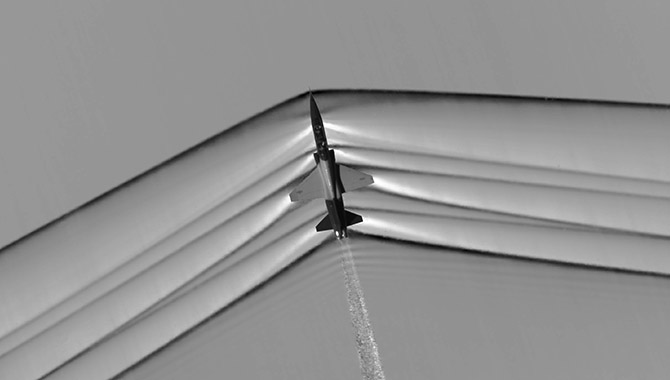 Commercial SST research was a global pursuit in the 1960s. As Europeans worked on the Concorde, NASA’s Flight Research Center (now Armstrong Flight Research Center) in Edwards, CA hosted a series of SST studies that examined landing, handling, and air traffic control issues for commercial planes traveling above Mach 1: the speed of sound.

While France and Britain moved forward with the Concorde, the U.S. ultimately decided that SST was associated with too many drawbacks to be commercially viable. In particular, the American public was concerned about excessive noise and environmental threats. Supersonic planes generated enormous noise during take off as well as thunder-like “booms” when the planes crossed the sound barrier. It also appeared that the levels of nitrogen oxide in SST exhaust could impair ozone formation. In 1969, NASA shut down its XB-70 SST program, and in 1971 Congress stopped funding U.S. commercial SST research. All overland civilian supersonic flight was banned.

That may change as NASA pursues a 10-year plan to reinvigorate supersonic passenger travel. As part of the plan, the agency awarded a $20 million contract through its New Aviation Horizons initiative to Lockheed Martin for the preliminary design of an experimental supersonic plane that should mitigate problems associated with SST in the past.

“This first X-plane will be called QueSST, for Quiet Super Sonic Technology,” said NASA Administrator Charlie Bolden. “The design is for a piloted test aircraft that can fly at supersonic speeds but create a sonic boom that’s more like a soft thump instead of the annoying boom that currently prohibits commercial supersonic flight over land.” He added, “We hope it’ll be no boom but a rumble.”

QueSST’s “low-boom” design is expected to reduce the shock produced as the airplane achieves supersonic speed, which in turn will lessen its impact at ground level. The preliminary design phase will take about a year and a half. At that point, a second round of competition will be held and the agency will select a new partner (or partners) for the design and build phase. QueSST is expected to begin flight research in the early 2020s.

The goal of the 10-year plan goes beyond QueSST to transform the commercial aviation industry overall by making flight cleaner, greener, safer, quieter, faster, and more efficient. NASA is poised to take on this challenge over the next decade with the backing of a $10.6 billion investment recently proposed by President Obama. The program will not only benefit air travel, it will save the commercial airline industry as much as $255 billion in coming decades through green aviation technologies. These technologies will help airlines cut fuel consumption by 50% and reduce nitrogen oxide exhaust by three-quarters compared with current state-of-the-art aircraft.

He added that the plan will “help maintain U.S. global leadership in aerospace industry in the face of growing international competition and support aviation’s key role in our nation’s economy.” Currently, the aviation industry contributes roughly $1.5 trillion in economic activity, including 12 million jobs.

“Every American is poised to benefit in some way from this investment because all of us have a stake in breathing cleaner air, or living in a country where more and more of our neighbors are working stable, well-paying jobs. As our climate continues to change, we all have a stake in building a future where we fly on aircraft that consume half as much fuel, that generate only one-quarter of current emissions, and that make use of greener energy sources in the first place,” said Bolden.

He added, “Every American has a stake in bringing about a future where our airports are better neighbors because aircraft operate as much as 42 decibels quieter and therefore the noise at [airports] is contained within the airport’s boundaries. A future where people can travel to most cities in the world in six hours or less, in an airplane that flies faster than the speed of sound over land with hardly a hint of a sonic boom.”

The work that NASA Aeronautics will perform is intended to increase safety and efficiencies in surface management as well as take off and landing processes, leading to more on-time departures and fewer delays in general. Improvements are imperative, as passenger demand for air travel is expected to increase substantially.

“We have a tremendous aviation infrastructure today, but demand for aviation services continues to grow. One estimate alone estimates a near doubling in the amount of passengers that are traveling between now and 2034—up to 7 billion worldwide,” said David Melcher, President and Chief Executive Officer of the Aerospace Industries Association.

“You name it, NASA was and is integral to the technologies that have advanced in each one of these areas and to conquer complex and problematic issues,” said Melcher. “This research hasn’t been done alone: it has been done with the active support and financial commitment from industry and has benefitted the entire aviation community.”

The QueSST contract and New Aviation Horizons research, said Shin, “is a great example of what can be done when a robust government investment [combines] with collaborative public-private partnership.”

Read an APPEL News article about the XB-70 SST program.

Explore one of the many ways NASA research has supported the aviation industry in this APPEL News article.

Watch a video about how NASA researchers are assessing the annoyance of sonic boom noise on consumers.