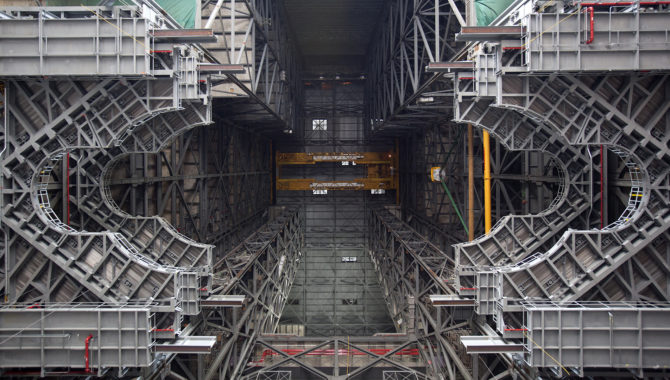 Photograph of the High Bay 3 in the Vehicle Assembly Building at Kennedy Space Center. Three work platforms, installed to provide access to the Space Launch System and Orion for EM-1, are visible.

In a recent report, the Government Accountability Office (GAO) called for NASA to closely examine cost and schedule reserves for Exploration Mission 1 (EM-1).

In November 2018, crucial elements of NASA’s human space exploration program will fly together for the first time during EM-1. The Space Launch System (SLS), designed to be the most powerful rocket in the world, will be the first launch vehicle to send crewed missions beyond low Earth orbit (LEO) in more than 40 years. During EM-1, the SLS will propel the unmanned Orion spacecraft 70,000 kilometers past the moon. The third element in the human space exploration program, the Ground Systems Development & Operations (GSDO) Program, will provide the infrastructure and systems to support the SLS and Orion.

The GAO regularly assesses the acquisition progress of the SLS, Orion, and Exploration Ground Systems (EGS). Since their July 2015 report, the GAO determined that the SLS has made notable progress in resolving certain technical issues, such as repairing a problem with the welding tool for the core stage and addressing a concern in the solid rocket boosters (SRBs), although the various difficulties encountered have impacted the budget, the schedule, or both. The program has also established the stability of the launch vehicle design, and conducted successful tests of the RS-25 engines and the SRBs. Now engaged in final design and fabrication, the SLS faces risks that are typical for large-scale human exploration programs, requiring careful management to avoid putting pressure on limited cost and schedule reserves. The GAO cautioned that the program lacks the performance measurement baseline needed to enable full earned value management examination of the core stage contract. Careful management will be increasingly critical to avoid further stressing cost and schedule reserves as the program reaches the next phase of development: final integration of SLS elements followed by integration of the SLS with Orion and the EGS.

In terms of the EGS, the GAO found that the program is progressing with efforts to mature the systems that will support EM-1. However, technical challenges involving projects on the critical path, such as the Vehicle Assembly Building and Mobile Launcher, as well as software development delays, are eroding cost and schedule reserves. The 2016 EGS Standing Review Board expressed concerns that the program’s remaining costs risks exceed the existing fiscal year reserve. Although the actual impact of this is unknown, the assessment was supported by the GAO.

Based on these findings, the GAO recommended that the agency use the upcoming integrated design review for EM-1 to reevaluate cost and schedule reserves in order to maximize the benefits of the remaining margins and ensure the November 2018 date can be met. NASA concurred with the recommendation.