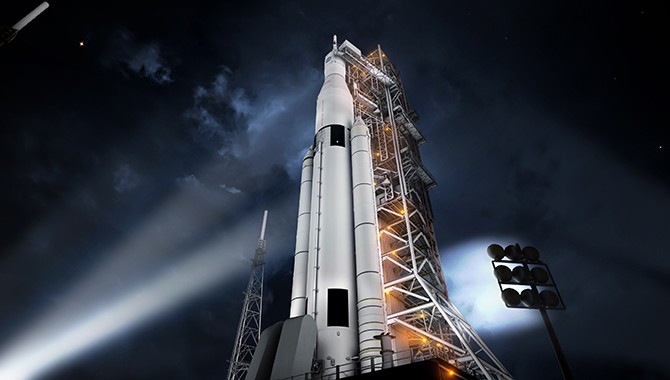 The first rendition of the SLS, known as Block I, is shown in this artist’s concept of the finished configuration. Block I is being developed for the initial SLS flights: Exploration Mission 1 (EM-1), planned for 2018, and EM-2, which will occur in 2021 or 2022.

The SLS is NASA’s new heavy lift launch vehicle. The most powerful rocket in the world, it will be the first launch vehicle in 40 years to send manned missions beyond low Earth orbit (LEO). Three versions of the SLS are planned. The first, a 70-metric ton launch vehicle known as Block I, is being developed for the initial SLS flights: Exploration Mission 1 (EM-1), which will propel the unmanned Orion spacecraft 70,000 kilometers past the moon in 2018, and EM-2, the first crewed flight for the SLS and Orion, which will send astronauts beyond LEO in 2021 or 2022. The second iteration of the SLS, Block IA/B, is a 105-metric ton vehicle that will be built after 2021 and used to reach destinations including near-Earth asteroids and Lagrange points. The final version of the SLS is Block II: a 130-metric ton structure that will serve as the launch vehicle for missions to Mars. Altogether, the SLS is expected to support the agency’s manned spaceflight program for decades. Along with the SLS and Orion, a ground systems program is developing the infrastructure and systems required for NASA’s crewed missions beyond LEO.

The GAO has assessed the SLS Program in the past. A year ago, based on recommendations from the GAO, the program established agency cost and schedule baselines at the 70% joint confidence level (JCL) for a planned November 2018 launch. More recently, the GAO examined NASA’s cost and schedule estimates and management tools for the initial phase of the SLS Program. According to the GAO, cost and schedule estimates for the SLS comply with five of six recommended best practices. The sixth practice focuses on using comparisons to verify an estimate. While the Independent Program Assessment Office (IPAO) reviewed the SLS cost estimate at Key Decision Point C (KDP-C), the GAO encouraged the agency to take several additional steps to further assess the estimates. The first is to commission a separate, independent estimate for comparison purposes. The second is to utilize an additional methodology to cross check the original estimate. Finally, the agency is encouraged to update estimates on an ongoing basis to enhance their value to the program management team and to develop cost and schedule estimates for the life of the program.

Going forward, the SLS team is putting a program-level earned value management (EVM) system into place that will account for all contractor and in-house work conducted on launch vehicle. The GAO recommended that this system track to external commitments, not just internal goals, in order to maximize its reliability as a tool for managing program development and reducing risk.