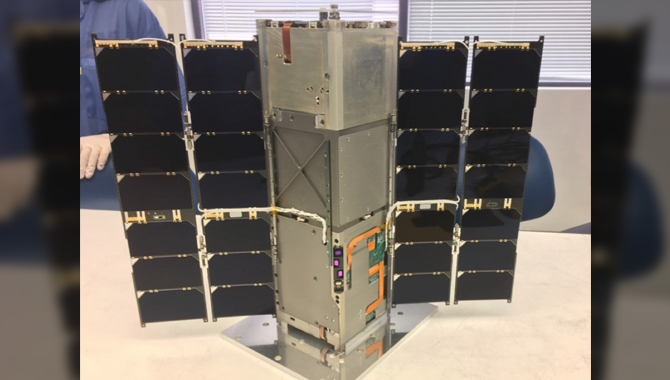 The RAVAN satellite, which weighs 9 pounds, measures about 4 x 4 x 13 inches and is roughly the size of a loaf of bread. It will demonstrate technology to measure imbalances in Earth’s energy that will contribute to a better understanding of greenhouse gas effects on climate.

Following dramatic advances in the technology and science capabilities of small spacecraft, NASA is harnessing their unique capabilities across diverse missions.

The agency is leveraging the unique intersection of size and innovation provided by CubeSats and small satellites to improve scientific and human exploration, lower mission costs, and create new opportunities for students at universities as well as NASA and private sector teams to fly missions in space.

Small spacecraft are proving to be powerful tools for driving innovation due to their ability to reduce risk and cost in demonstrating new technologies, testing those technologies, and providing multi-perspective observation systems when used in swarms or constellations. The agency is working with international and industry partners as well as academia and other government organizations to infuse small satellites into current and future missions in order to maximize science returns and technological breakthroughs.

“NASA small satellites help us create entirely new architectures not feasible with traditional platforms,” said NASA Chief Scientist Ellen Stofan during a teleconference about the agency’s use of CubeSats and small satellites. “NASA is advancing small spacecraft science to open doors for many possibilities and results that will benefit our nation. New public-private partnership opportunities that allow for observations from small spacecraft constellations, and the purchase of high-quality data products from the private sector. New avenues of access to space using emerging commercial nano-launch capabilities and providing leadership to fly small spacecraft as secondary payloads on NASA missions. A broader access to space for universities and students to pursue science.”

“In Earth sciences, we are now moving into using constellations of small satellites to do science,” said SMD Associate Administrator Thomas Zurbuchen. “So look for small satellites to play an increasing and integral part in NASA’s science portfolio, really complementing a spectrum of large to small missions that together address the important questions that we deal with at SMD.”

Steve Jurczyk, STMD Associate Administrator, said, “In the last seven years, NASA has made fairly significant investments in developing and demonstrating small satellite technology, which has enabled some really great science applications and missions.” The Small Spacecraft Technology Program has engaged with NASA centers, industry, and academia in demonstrating a range of new technologies for small satellites, including enhanced attitude determination and control, high-bandwidth communications, and advanced power systems and propulsion systems.

Also launching in the first quarter of 2017 are the Integrated Solar Array and Reflectarray Antenna (ISARA) mission, which will look to increase the bandwidth from space to ground for radio frequency (RF) communications, and the CubeSat Proximity Operations Demonstration (CPOD). “[CPOD] will demonstrate formation flight, proximity operations, and autonomous rendezvous and docking using CubeSats. CPOD advances the capabilities for small spacecraft to support a wide variety of our missions, including in-space inspection, servicing, and assembly, as well as small body exploration,” said Jurczyk.

Early in the year, the agency will introduce the Small Spacecraft Systems Virtual Institute (S3VI) at Ames Research Center (ARC). Co-sponsored by the SMD and STMD, the institute will be used by external organizations as well as internal NASA teams to explore new technologies, incorporate them into missions, and advance understanding and use of small spacecraft.

In the next few months, NASA is launching several small satellite missions to test technologies and study the earth’s climate in unprecedented ways. Michael Freilich, director of NASA’s Earth Science Division, said, “We’re funding cutting-edge development of miniaturized sensor technologies and processing techniques, and testing them in orbit onboard CubeSats. And we’re supporting partnerships with the private sector, with NASA as an interested consumer rather than a funding agency dictating required capabilities, to ensure that the agency and our research scientists can leverage and benefit in a sustained way from private sector small satellite and low-cost launcher developments.”

One mission is the Cyclone Global Navigation Satellite System (CYGNYSS), which will send a swarm of eight small spacecraft into orbit to better understand how hurricanes and tropical cyclones intensify. The CYGNYSS swarm will orbit Earth at hurricane latitudes and measure GPS signals bounced off the ocean surface to determine wind speed and, therefore, calculate shifts in storm intensity.

Another mission designed to advance understanding of hurricane behavior is the Time-Resolved Observations of Precipitation structure and storm Intensity with a Constellation of Smallsats (TROPICS) project. Expected to launch in 2019 or 2020, TROPICS will employ a constellation of 12 satellites to make frequent measurements of the temperature, humidity, and shifts in precipitation in a storm environment in order to assess the dynamic behavior of the storm.

“Each CubeSat will host a sophisticated microwave instrument that scans across Earth’s surface once every two seconds to provide three-dimensional information on the storm’s structure, much like a CAT scan. The CubeSats are much smaller than present weather satellites that can be almost as large as an SUV, which allows them to be built and launched quickly and at relatively low cost,” said TROPICS principal investigator William Blackwell, from the Massachusetts Institute of Technology Lincoln Laboratory in Lexington.

The Radiometer Assessment using Vertically Aligned Nanotubes (RAVAN) project is a technology demonstration mission that will examine the accuracy of a small instrument to measure changes in Earth’s energy emissions. The project features a satellite the size of a loaf of bread to help answer key questions about climate.

“Virtually all the energy entering the Earth system comes from the sun, but human activities have been causing growing levels of greenhouse gases in the atmosphere, and these are acting like a blanket to trap some of the earth’s energy that would otherwise be released to space. So how much energy does our greenhouse gas blanket trap?” asked Bill Swartz, CubeSat principal investigator at Johns Hopkins University Applied Physics Laboratory in Laurel, MD. “That is what the RAVAN project will help address by demonstrating a new, low-cost technology to map Earth’s outgoing energy from a constellation of satellites.”

These are just a small sample of the projects NASA is involved with as a means of exploring and advancing CubeSat and small sat capabilities.

Read an APPEL News article about the OCSD mission.

Learn more about how NASA is expanding CubeSat launch opportunities in this APPEL News article.