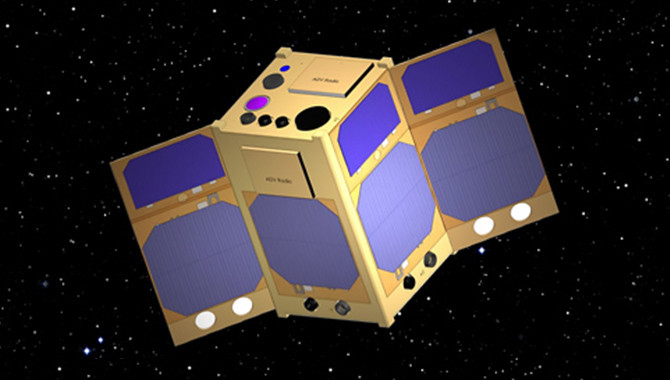 Artist’s representation of the OCSD, a cubesat funded by NASA and developed by the Aerospace Corporation of El Segundo, CA.

OCSD is a cubesat supported by the agency’s Small Spacecraft Technology Program (SSTP). Small satellites such as OCSD are poised to have a profound impact on the capabilities of NASA, other government agencies, the commercial space industry, and academia.

“Our ultimate goal is to promote small spacecraft as a paradigm shift for NASA and the larger space community,” said Steve Jurczyk, associate administrator for the Space Technology Mission Directorate (STMD). “We will likely need the unique capabilities we are demonstrating with these cubesats on our future missions into deep space. Without these investments, we will not be able to move humans beyond the International Space Station.”

OCSD is designed to explore a key area of interest for NASA and the commercial communications industry: laser communications, in which information is transferred via laser beam rather than radio signal. The intent is to significantly increase the amount of data transmitted from low Earth orbit (LEO) to Earth and the speed at which that transfer occurs.

“Our goal with this satellite is to achieve communication from LEO to ground at data rates that are a factor of 100 higher than what has been achieved so far in cubesats using radio frequency [RF] communication,” said Richard Welle, director of the Microsatellite Systems Department at the Aerospace Corporation and program manager for OCSD. “This is achieved in this satellite by developing a compact laser system and a precision attitude control system to point the laser at the ground station.”

“[P]ointing is a huge challenge for laser [communications]. And when you’re talking about communications from the moon or Mars back to Earth, pointing and stability control is super critical,” said Jurczyk. Attitude control and pointing are so important because successful data transmission involves pointing the satellite at a very small target. In contrast, receivers for RF communications can range from a few meters in diameter to several tens of meters, a far easier target to hit.

“[OCSD is] going to beam a laser from six hundred to seven hundred kilometers up in space and it will hit a target that’s only thirty centimeters wide. That’s pretty incredible,” said Andres Martinez, program manager for the SSTP.

During an optical downlink session, OCSD will fly over the ground station on Mount Wilson in southern California. While the satellite is only in view of the station for about three minutes per pass, the planning for the link up begins roughly 24 hours earlier.

“We need to determine first exactly where the satellite is going to be at the time that it’s passing over. For this kind of precision pointing, you need to know where you are. So the satellite has GPS receivers on board to allow us to calculate its orbits precisely. Then on the ground we calculate directions, pointing vectors, for the laser beam as it’s flying over the ground station,” said Welle. “Then we upload that information to the satellite on the pass prior to passing over the optical ground station.”

The upload is done using RF, not optical communications. This type of asymmetric communications, in which the cubesat sends data via laser but receives it via radio signal, benefits small spacecraft like OCSD with limited power available onboard. “[A]s the satellite passes over the ground station, it will turn on the laser shortly before the pass begins and then dump the data through the laser to the ground station over a period of about 90 seconds. That information will be collected at the telescope on the ground,” Welle said.

In addition to enabling faster data transfer, optical technology will enhance communications in general by using a less congested section of the electromagnetic spectrum. “The RF part of the spectrum is getting pretty crowded, and we keep chopping up that spectrum into smaller pieces to cram more satellites and more transponders in there. By going to a different part of the electromagnetic spectrum, light, we can open up a whole new bandwidth regime to revolutionize commercial communications,” said Jurczyk.

Beyond advancing communications capabilities, cubesats have other advantages.

“One unique aspect of cubesats that we’re taking advantage of in this mission is they’re extremely low cost to both build and launch. And because of that, we’re able actually to fly an engineering model of this satellite. Normally when you develop satellites, you make an engineering model and you test it thoroughly in the lab, and then you leave it there and you build the flight models and fly those. But there are things you want to learn about satellites that can’t be learned by testing them in the lab. So in this case, we’re actually flying the engineering model of this satellite. This provides risk reduction and allows faster technology development,” said Welle.

“The ability to fly a mission quickly, learn from it, and turn around and fly another one very quickly is something you don’t get with large multibillion-dollar projects that take five or ten years or more to begin. So we see it driving innovation and we see it providing very unique new capabilities that will supplement and complement what we do with larger satellites,” said Andrew Petro, NASA’s SSTP program executive.

OCSD is only one of NASA’s cubesat initiatives. The agency is hosting the Cube Quest Challenge, in which non-NASA individuals and teams compete in the conception and development of cubesat technologies that will facilitate space exploration for NASA and the nation. In addition, the agency has sponsored several cubesats currently in orbit that were developed by teams from academia, the non-profit sector, and NASA.

Eventually, the agency may partner with international space agencies to further develop cubesats and other technology that can be leveraged for deep space missions.

OCSD was selected for a flight opportunity by NASA’s CubeSat Launch Initiative (CSLI). Funded by the SSTP, the cubesat was developed and is being operated by the Aerospace Corporation in El Segundo, CA.

Watch a video about the development and launch of previous cubesat missions.