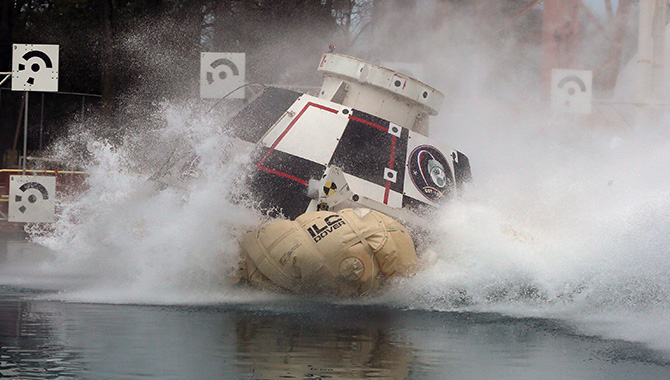 In February 2016, engineers from Langley Research Center (LaRC) and Boeing tested the performance of the CST-100 Starliner, which is being developed for the Commercial Crew Program, in water. Although the capsule is designed to land on the ground, the test article was dropped into LaRC’s Hydro Impact Basin to assess its performance in the event of an emergency water-based landing.

In 2010, with retirement looming for NASA’s space shuttle, the agency needed a new means of transporting crew to and from the International Space Station (ISS). An immediate solution was to set up a contract with Roscosmos, the Russian space agency, to procure seats on their Soyuz. Long term, however, NASA had different priorities. The agency desired the ability to launch astronauts from U.S. soil and to access the ISS without relying on another nation. In addition, NASA was committed to supporting the development of a commercial space industry operating within low Earth orbit (LEO), with the eventual goal of handing over transportation in LEO to private industry so that the agency could focus on deep space crewed missions, such as the journey to Mars. 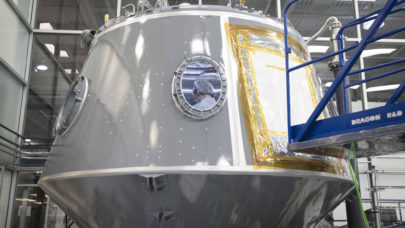 At SpaceX, a full-scale module was constructed to test the Environmental Control and Life Support System (ECLSS) that will support missions on the company’s Crew Dragon spacecraft.

To accomplish both goals, the agency established the CCP. In 2014, NASA awarded contracts to Boeing and Space Exploration Technologies, Corp. (SpaceX) to create human-rated transportation systems that could fly astronauts to the ISS. According to the firm-fixed-rate contracts, each company will develop an appropriate vehicle, plus associated infrastructure, that meets NASA requirements for human spaceflight. They will then undergo a certification review, providing proof that the agency’s requirements were met, before conducting crewed missions to the space station.

The CCP approach differs from NASA’s traditional involvement with human spaceflight program development. Under the CCP contracts, the companies benefit from the expertise and resources of the agency, but NASA engineers do not make any design decisions. Furthermore, the agency is less involved with testing, launching, and operating the systems than they would be ordinarily. This approach encourages the industry partners to assume full responsibility for their systems, from design through operations, which reinforces the new role of the commercial space industry within LEO. Nonetheless, NASA crafted the contracts to include extensive opportunities for the agency to observe how Boeing and SpaceX are developing their systems to meet requirements. This is important to the agency, as it retains ultimate responsibility for crew safety.

To assess the progress of the CCP, the GAO conducted a review of the program from March 2016 through February 2017. They noted that both contractors have made solid progress since 2014. Boeing completed its critical design review in 2015, shipped a structural test article for the service module to a testing facility in May 2016, and followed that with the crew module in January 2017. SpaceX completed the critical design review for its spacecraft in 2016 and wrapped up integrated testing and qualification of several major components in November 2016. The original goal for both companies was to undergo certification review—in which they would establish that their systems have met all of NASA’s requirements—in 2017. By late 2016, however, both Boeing and SpaceX were experiencing delays and had postponed their certification reviews until the third (SpaceX) or fourth (Boeing) quarter of 2018. The GAO pointed out that there are a number of reasons for the delays, including an unexpected increase in the time needed for the CCP team to observe the work done by each organization. According to the GAO, the agency may ultimately have to choose between maintaining the current high degree of visibility into the process or adhering to the schedule.

NASA has since agreed to the updated schedules. However, the delays create a new concern for the agency: how to maximize its investment in the ISS if the CCP transportation systems are not ready by the time NASA’s contract with Roscosmos expires. As it stands now, Russia will provide transport for six crew members through 2018, with rescue/return services extending into late spring 2019. After that, the agency will need to find a new means of sending astronauts to the ISS.

Given the potentially serious ramifications should the CCP systems not be ready for certification review by the end of 2018, the GAO recommended that NASA develop a contingency plan for crew transport within LEO. The agency has several options. First, the existing contract with Roscosmos has some room for movement: the schedule can be pushed back slightly, enabling the final seat to be used in spring of 2019, with a corresponding extension for the rescue/return element. Second, while the idea of establishing a new contract with Roscosmos lacks appeal—the process can take as long as three years, during which time the CCP systems would likely be up and running—NASA could apply for standby seats on the Soyuz on an as-needed basis, though there is no guarantee space would be available. Third, the U.S. might initiate a new one-year mission beginning in late 2018, which would enable crew to remain on the ISS longer than usual and return once the CCP transportation vehicles are ready. NASA concurred with the GAO recommendation and will prepare a contingency plan to present to Congress.