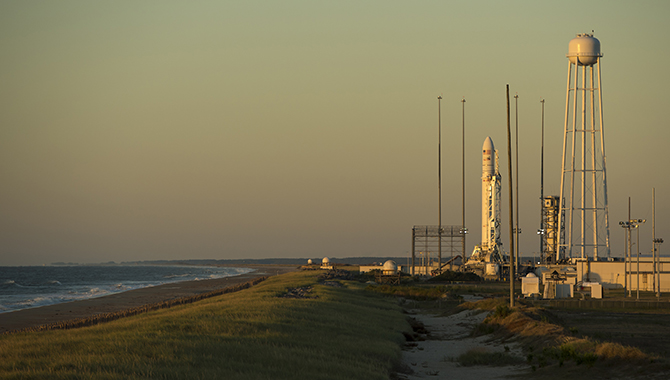 At the Mid-Atlantic Regional Spaceport (MARS) at NASA’s Wallops Flight Facility in 2013, an Orbital Sciences Corporation Antares rocket carrying the Cygnus cargo spacecraft sat on Pad-0A in preparation for a demonstration cargo resupply mission to the International Space Station (ISS).

As the commercial space industry expands, clearer communication is needed about financial responsibilities for launch activities, according to the Government Accountability Office (GAO).

Private companies are helping transform the American space industry. In September 2014, NASA announced that it was working with two commercial partners, The Boeing Company (Boeing) and Space Exploration Technologies Corporation (SpaceX), to develop a new generation of crew-rated spacecraft for manned missions within low Earth orbit (LEO). At the same time, the private industry has been moving forward with unmanned spacecraft launches through commercial spaceport operators and launch providers. All of these activities benefit the nation by expanding the U.S. economy into space while enabling NASA to focus on crewed deep space missions, including the journey to Mars.

To facilitate this flourishing industry, the Department of Transportation (DOT) was given authority to enable private-sector launches, including licensing and safety monitoring. Regulatory oversight of the commercial sector was assigned to the Office of Commercial Space Transportation within the Federal Aviation Administration (FAA). FAA manages the licensing process for commercial launch vehicles as well as commercial spaceport operations within the U.S.

In recent years, the industry has grown rapidly. In 2015, eight commercial space launches took place compared with none at all in 2011. Typically, commercial rockets lift off from federal facilities, such as NASA properties or U.S. Air Force bases. That is changing as more non-federal, FAA-licensed spaceport operators emerge. There are now 10 such operators. Three are located on federal facilities: the California Spaceport at Vandenberg Air Force Base in California (CA), Cape Canaveral Spaceport at Cape Canaveral Air Force Station in Florida (FL), and the Mid-Atlantic Regional Spaceport (MARS), which resides on land owned by NASA’s Wallops Flight Facility in Virginia (VA). Others are located on state, municipal, or private property. Only three of the 10 spaceport operators have had commercial launch experience in the past five years: MARS, the Mojave Air and Space Port in CA, and Spaceport America in New Mexico (NM).

Despite the clear benefits of commercial space activities, questions have emerged about the financial responsibility for each party involved in launches. FAA regulations require launch providers to obtain insurance, but spaceport operators are not required to do so. As a result, confusion exists about who is financially responsible for property damage should a launch mishap occur. This became a tangible issue on October 28, 2014, when an Orbital Sciences Corporation resupply mission to the International Space Station (ISS) failed during launch, causing $15 million dollars in damage to the MARS facility, which is state owned. The parties involved disagreed about who was financially responsible for all of the infrastructure damage. Ultimately, Congress had to intervene before a resolution was reached.

Lack of clarity regarding the financial responsibilities surrounding these launches is a serious concern, as under-insured launch mishaps could delay future launches and impede the development of the commercial launch industry. Therefore, the GAO was asked to review the current state of insurance coverage for spaceports and to determine whether stakeholders consider the existing approach adequate.

As part of its investigation, the GAO interviewed FAA and NASA officials, representatives from FAA-licensed spaceports, launch providers, insurance brokers, and insurance companies. They also visited two spaceports (Cape Canaveral Spaceport and MARS) and reviewed key documents. Their findings indicate that stakeholders are divided about whether to maintain the existing approach to financial responsibilities or introduce a different option.

Overall, the GAO report determined that spaceport operators are confused about the regulations governing financial responsibility surrounding commercial space launch activities. They concluded that because the FAA has not clearly communicated its position on these regulations, spaceport operators may not have adequate insurance. To resolve this issue, the GAO recommended that the FAA clarify and better communicate its interpretation of the financial responsibility regulations for commercial space launches.