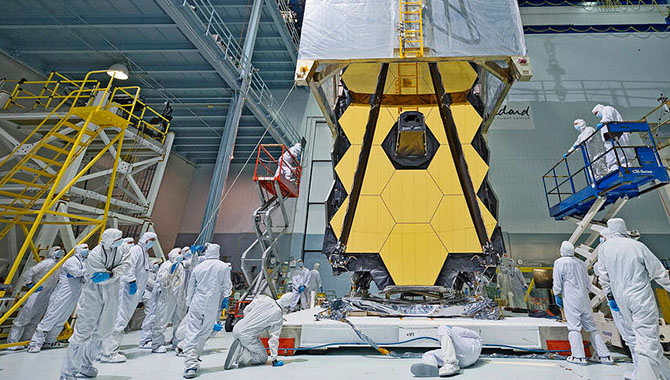 The James Webb Space Telescope (JWST) is now in the integration and test phase of development. In preparation for transport to testing areas, a clean tent is draped over the massive JWST primary mirror.

According to a report by the Government Accountability Office (GAO), the James Webb Space Telescope (JWST) completed its fifth consecutive year of being on budget and on schedule.

The most powerful telescope ever built, JWST is twice as large and 100 times more sensitive than the Hubble Space Telescope. JWST is designed to peer back 13.5 billion years to see the faint light of the first galaxies and stars as they formed in the early universe. To achieve this goal, the telescope includes a 6.5-meter primary mirror and a sunshield the size of a tennis court. It is one of the most complex projects in NASA’s history.

Now, with less than two years to go until launch, JWST is deep in the integration and test phase of development. Two of five major integration and test efforts have been completed, two more are underway, and the fifth will begin in fall of 2017. Although the GAO defined this as the riskiest phase, the project continues to meet its cost and schedule commitments. During 2016, JWST consumed three months of schedule reserve, with six months remaining. The remaining amount exceeds that required by Goddard Space Flight Center (GSFC), which manages the project. The GAO cautioned that issues on each of JWST’s elements and major subsystems contributed to the use of schedule reserve in the past year. This is a concern, as the project faces potential risks for the duration of the integration and test phase.

In terms of budget, the project met its cost commitments for the year. Despite spending $42.8 million more than planned, the project remains within levels outlined in the 2011 plan, as it has for the past five years. The project used some 2016 cost reserves to address technical challenges in order to maintain the desired schedule. A key budgetary challenge identified by the GAO report involves the contractor for the JWST observatory, Northrup Grumman. The contractor completed 89% of the work but used an average of 165 more full-time equivalents (FTEs) than expected to do so. Northrup Grumman has submitted a proposal for addressing cost overruns to the agency. The project team is evaluating the proposal.

The GAO concluded that the project made significant progress on hardware deliveries and integration efforts during 2016, and offered no recommendations.

Read an APPEL News article about the 2015 GAO JWST assessment.

Learn more about JWST in this APPEL News article.