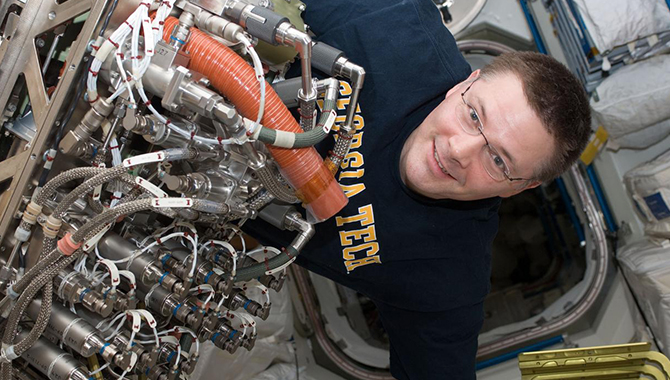 NASA Astronaut and Expedition 25 Commander Doug Wheelock works to install a system to extract more water out of the International Space Station atmosphere as part of the station’s Environmental Control and Life Support System.

Innovation often starts with stopping to look around.

“Life moves pretty fast. If you don’t stop and look around once in a while, you could miss it.”

The infamous quote from the iconic movie “Ferris Bueller’s Day Off” set the stage for Kennedy Space Center Engineering Director Pat Simpkins’ presentation on innovation at NASA. “Innovation, to me, is about looking around,” said Simpkins, who referenced adventures from the 1986 movie. “I’m a big fan of stopping and looking around. And I’m a big fan of looking outside your swim lane.”

Simpkins shared stories from Apollo through ongoing work on Orion to demonstrate the significance of careful observation, usually beyond the focus of a launch or test.

“If you’ve been working in a system or a project or a program for such a long period of time, that’s your swim lane,” said Simpkins. “You’re an expert. Absolutely. But there may be stuff going on around you that you’re not noticing because you’re so busy keeping your head down and coloring.”

He said it’s important to be open to looking at other disciplines and experimenting with approaches that aren’t necessarily “how it’s always been done.”

Simpkins gave an example of an unusual method used to find the source of a water leak during processing of the U.S. Laboratory for the International Space Station. All the hardware was installed, processing was almost complete, and technicians discovered water in the bottom of the Environmental Control and Life Support System bay. They couldn’t figure out where the water was coming from and contemplated opening up the bay and starting over. And then someone recommended a simple, straightforward solution: lay down a brown paper bag and see where the water drips. It was a different approach to checking a leak –not listed in the ASME Handbook — and pointed them to the vicinity of the humidity separator where they isolated the leak, torqued the fittings, and fixed the leak.

Simpkins says people have to get comfortable with the fact that there’s a distinction between different and wrong. “There are some wrong ways to do things, and maybe we’ve got enough scars and lessons learned to say, ‘Boy, we’re never going to do that again.’ And there’s also different.”

He offered the number of parachutes used for entry, descent and landing as an example. NASA has a lot of experience with three parachutes, but not with two or four. “That doesn’t make four wrong. It makes it different, and it’s something that we need to pay a lot of attention to, and I’m happy to say that especially the commercial crew team is asking those questions and looking at it from the point of view that there’s a difference between different and wrong,” he said.

In order to create an environment that allows innovation to flourish, Simpkins says team members need intense — almost irritating — curiosity. “I think you have to inspire and promote curiosity in your organization, whether it’s the second-shift test engineer or the project manager,” said Simpkins. “You have to reward curiosity. And then you have to ask questions, which may trigger a new thought or a new path of discovery in the program or project.”