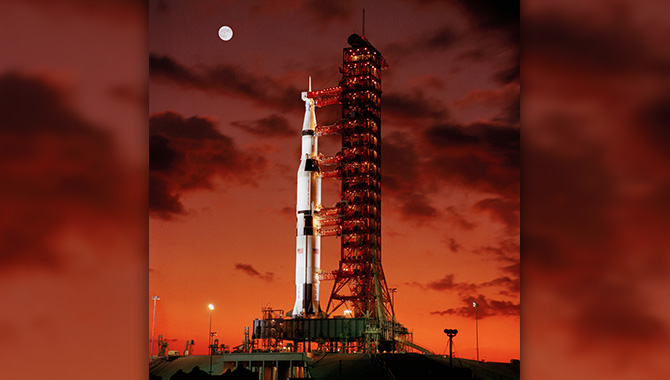 Apollo 4 on the launch pad at Complex 39. Apollo 4 was the first integrated test of all three stages of the Saturn V rocket.

Fifty years ago this month, Apollo 4 went “all-up” to propel the U.S. forward on its path toward manned missions to the moon.

As the second decade of the 21st century nears its end, NASA is working toward the first launch of the Space Launch System (SLS), the most powerful rocket in the world. In conjunction with the Orion spacecraft, the SLS will one day send humans to Mars. The first integrated flight of the SLS and Orion, Exploration Mission 1 (EM-1), is currently planned for late 2019.

Five decades earlier, NASA was on the brink of another launch crucial to the expansion of the nation’s human spaceflight program. The Apollo Program was focused on sending astronauts to the moon before the Soviet Union did so. Introduced in 1961, it had not yet flown an official Apollo mission by 1967. Several unmanned test flights of different components had been conducted the year before, but management was anxious to push the program forward as quickly and safely as possible.

A decision was made to run the Apollo 4 mission as an “all-up” test of the Saturn V and Command Service Module (CSM), which would house crew during manned missions to the moon. This meant that, for the first time ever, NASA intended to test every element of the Manned Space Flight Network system simultaneously instead of following the step-by-step approach used to develop spaceflight initiatives in the past.

The mission was rife with firsts. It would be the first test of the Saturn V first stage and second stage, and the first test of the third stage’s ability to reignite on-orbit in mid-flight. It would also be the first test of numerous components, including the heat shield and thermal seal. Altogether, the mission would test the technologies, systems, and operations that would be used on future crewed lunar missions, including the structural integrity and compatibility of the spacecraft-launch vehicle configuration. Finally, Apollo 4 represented the first liftoff from Launch Complex 39 at Kennedy Space Center (KSC), built specifically for the Saturn V.

On November 9, 1967, Apollo 4 lifted off from Complex 39 at one second after 7:00 a.m. ET. The Saturn V first stage produced 7.5 billion pounds of thrust to get the enormous rocket and its payload, the CSM, off the ground. Two and a half minutes later, at roughly 40 miles above Earth, the first stage separated. In total, it burned through 4.5 million pounds of liquid oxygen and RP-1, a refined form of kerosene.

The second stage took over, running on liquid hydrogen. It rocketed the CSM to more than 100 miles from Earth before cutting off and separating as scheduled. So far, both untested elements of the Saturn V had performed virtually flawlessly.

The third stage ignited and inserted Apollo 4 into the first of two circular orbits. The spacecraft remained in that orbit for two full circuits before the third stage was reignited, providing a push into a final, larger, elliptical orbit. When that insertion was complete, the rocket’s third stage fell away. The Saturn V’s job was over. It had successfully accomplished everything it was designed to do.

The spacecraft propulsion system took over and propelled Apollo 4 to its highest altitude, far above the Indian Ocean. From there, the spacecraft plunged back toward Earth. As it neared Earth’s atmosphere, the propulsion system powered up again, burning for 4.5 minutes to so that the spacecraft achieved speeds of roughly 25,000 miles per hour. This speed and the assigned trajectory were critical to simulate the approach of a crewed mission returning from the moon.

At this point, the command module separated from the service module. With its heat shield pointed forward, Apollo 4 reentered the atmosphere eight hours and 40 minutes after launch. The heat shield and thermal seal performed perfectly: although the temperature on the heat shield reached 5,000 degrees Fahrenheit, the environment within the module stayed at or below 70 degrees. Finally, the spacecraft touched down in the Pacific Ocean near Hawaii.

In less than nine hours from liftoff to landing, Apollo 4 established the viability of multiple program components, systems, and operations, including reentry procedures under extreme temperatures. The mission was a resounding success, clearing a path for human spaceflight missions to the moon. Barely a year later, the promise of manned missions to Earth’s satellite was met: in December 1968, Apollo 8 became the first mission to send NASA astronauts into lunar orbit.

Read an APPEL News article the Lunar Orbiter Program, which paved the way for the successful Apollo missions.