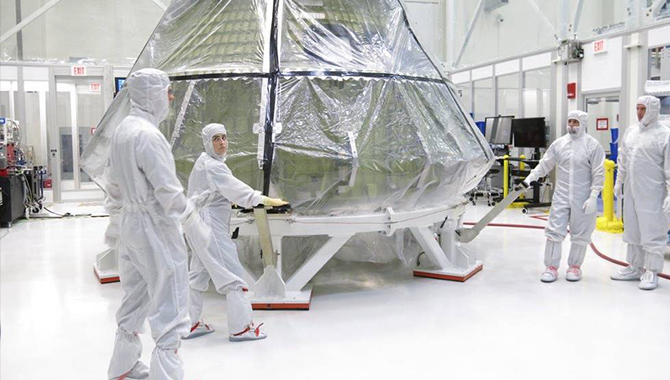 Work toward Exploration Mission 1 continues while the agency considers the pros and cons involved in adding crew to the mission. In this image, the Orion crew capsule was transferred to the clean room in the Neil Armstrong Operations and Checkout Building at Kennedy Space Center in July 2016.

EM-1 will be the first mission to bring together key components of NASA’s manned deep space program. The Orion crew capsule, NASA’s first spacecraft in over 40 years designed to transport astronauts beyond low Earth orbit (LEO), will join the Space Launch System (SLS) to test major systems on the spacecraft. During the mission, the SLS will propel Orion 275,00 miles from Earth into a distant lunar retrograde orbit, where it will fly past the moon before returning.

Slated for late 2018, EM-1 was originally conceived as an uncrewed mission. Astronauts were expected to join Orion and the SLS for the next flight: EM-2. As Orion’s first manned mission, EM-2 would be used to determine how Orion interacts with crew on board. Following EM-1 and EM-2, the capsule would be ready to take humans beyond LEO for longer missions to cis-lunar space, an asteroid, and eventually Mars.

Recently, however, the agency decided to explore the possibility of including astronauts on EM-1 to accelerate crew capabilities. “I want to stress to you that it’s a feasibility study,” said William Gerstenmaier, associate administrator for the HEOMD. “When we get done with this, we won’t come out with a hard recommendation one way or the other. We’re going to talk about essentially the advantages and disadvantages of adding crew to EM-1.”

Doing so would not simply be a matter of adding astronauts to EM-1 as it stands right now. “We know that there are certain systems that need to be added to EM-1 to add crew,” he said. “EM-1 did not have a life-support system on board, the crew displays were not totally functional yet, the abort system was an inert abort system on EM-1, so all of those things will have to be changed. We have a good, crisp list of all the things we would physically have to change from a hardware standpoint on the vehicle.”

Gerstenmaier has assembled a team to conduct the feasibility study. Their work includes determining what would need to change on the spacecraft, what new tests would have to be conducted, and what additional risk is associated with adding crew, as well as how much more time and funding would be required. The team will also explore the advantages and disadvantages of incorporating astronauts into flight tests earlier in the evolution of the program than originally planned.

William Hill, deputy associate administrator for Exploration Systems Development (ESD), said that the agency is considering the best way to proceed. “One option is to accelerate EM-2, the other option is to put crew on EM-1. We do know we have constraints between EM-1 and EM-2 because of the addition of the Exploration Upper Stage and the modifications we have to make to the mobile launcher and infrastructure in the Vehicle Assembly Building here at Kennedy. So we kind of ruled out trying to accelerate EM-2 and focused our attention on the potential for adding crew to EM-1.”

The feasibility study will be based on the concept of including two crew members while using a mission profile that is closer to the one planned for EM-2. “[T]hat is a multi-translunar injection free return trajectory around the moon and back, approximately an eight- to nine-day mission, with about a day in high Earth orbit around Earth at the beginning to check out the life support systems,” said Hill.

One obstacle to accelerating crew involvement is that the second stage of the SLS for EM-1, the Interim Cryogenic Propulsion Stage (ICPS), is not human-rated. A different upper stage, the Exploration Upper Stage (EUS), is expected to be human-rated for EM-2.

“One of the tasks we’ve asked the team to go look at is what changes we’d need to make to this Interim Cryogenic Propulsion Stage to do the mission that we would like it to go do,” said Gerstenmaier. “We think we can set up a profile that limits crew risk exposure, so if something doesn’t go right with the upper stage, or there’s problems with the upper stage, we can abort out of that and still get the crew home safely. We might lose the mission, but we could still protect the crew.” The feasibility study will also explore the possibility of adding micrometeoroid debris protection to the ICPS to enhance mission safety during the high elliptical Earth orbits.

Despite the additional work that would be needed, there are advantages to delaying EM-1 in order to include crew. For example, the existing EM-1 schedule may be hindered anyway, due to tornado damage at the Michoud Assembly Facility in New Orleans, which has slowed tank work on the SLS, and delays related to the European Service Module, a key component of Orion. But if the feasibility study suggests that the work required to add crew to EM-1 will push the mission into the 2020s, it may not be worth pursuing.

Both men stressed that there is no pressure to add crew to EM-1; rather, the study is being conducted to explore the best options overall for moving forward given the potential delays to EM-1 and the interest in bringing crew into the process as early as possible. “I look at it more matter of factly,” said Gerstenmaier. “What do I gain, technically, by putting crew on? Why is it necessary to put crew on? What are the benefits of putting crew on? And that’s what really drives us as we go forward.”

“We will let the identified risk and the benefits drive us as well as the data,” said Hill. “[W]e know it’s going to take a significant amount of money, and money that will be required fairly quickly, to implement what we need to do. So it’s a question of how we refine the funding levels and the phasing of the funding for the next three years, and see where it comes out. If we come out and determine that we’re not going to do this, we still have a very exciting mission on EM-1.”

Closely examining the current state of EM-1, said Gerstenmaier, is invaluable regardless of the outcome of the study. “This is a great opportunity for us to step back, reflect on what we’re doing, look at the overall plan again, and see if there [are] any changes we want to make moving forward. So I’m very encouraged by the fact that we get the opportunity to go do this study.”

The team is expected to take about a month to conduct the feasibility study. Once the study is complete, it will be carefully examined, with astronauts contributing to the decision about how to proceed. Until then, work on EM-1 and EM-2 will proceed across the agency as planned.

View a video about the progress made on Orion over the past year.

Watch a video showing the current plan for EM-1.

Read an APEL News article about the successful final qualification motor test of the SLS.

Read an APPEL News article about a Government Accountability Office report on the Orion Program.