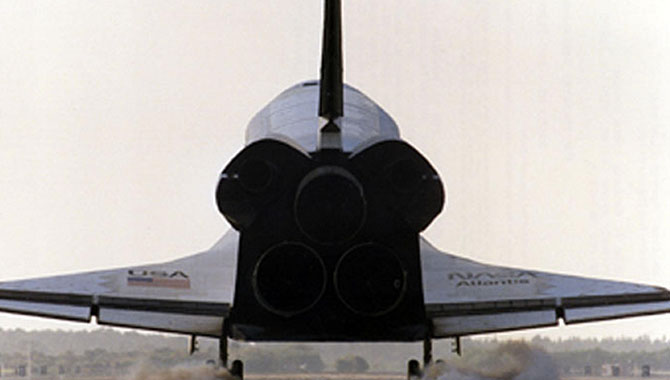 The story of the Space Shuttle Program is one of overcoming obstacles through hard work and innovation. During STS-79, astronaut Shannon Lucid’s efforts set new records for the program.

For four years, from 1994 to 1998, a key space shuttle initiative was the Shuttle-Mir Program. Throughout this collaborative venture, NASA astronauts engaged in long-duration space missions on the Roscosmos space station while Russian cosmonauts flew on the orbiter. Research into life sciences and microgravity was an important component of the program. The collaboration provided a foundation for future partnerships, including the International Space Station (ISS).

The shuttle flew 11 docking missions to the Russian space station between 1995 and 1997, seven utilizing the orbiter Atlantis. The fourth Atlantis-Mir mission, STS-79, rocketed away from Kennedy Space Center (KSC) on September 16, 1996. That wasn’t the planned launch date. Originally, STS-79 was scheduled to lift off on July 31. The mission was postponed when a question arose concerning the safety of the orbiter’s boosters. The STS-79 solid rocket boosters incorporated the same adhesive, a relatively new compound, that had been used on STS-78. Although that flight had gone smoothly, post-mission inspection revealed hot gas paths into the J-joints of the motor field joints. Managers believed that the boosters were safe to fly but decided to return to the original adhesive. The STS-79 boosters were replaced with a pair intended for the next shuttle mission, STS-80.

A new launch date was set: September 12, 1996. Soon that date had to be scrapped, too, when Hurricane Fran threatened the Space Coast. It wasn’t until September 16 that Atlantis finally rocketed away from Earth. Less than 15 minutes into the flight, one of the auxiliary power units failed. After careful scrutiny, the mission was cleared to proceed as planned. 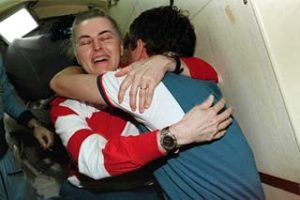 In addition to the cargo transfers and science experiments, STS-79 featured the first U.S. crew exchange on Mir. On September 19, STS-79 Mission Specialist John Blaha replaced Mir Board Engineer 2 Shannon Lucid, who was returning to Earth after six months on the station. Lucid, a doctor of biochemistry and member of NASA’s first astronaut class to include women, was accustomed to breaking barriers. She was the only woman to serve on Mir. After living and working onboard for 188 days, she set the record for the longest stay of any American. She also set the world record for time on orbit by a woman, an achievement that wasn’t bested for a decade.

“Most pioneers set their sights on just one frontier,” President Clinton said at the time. “Shannon Lucid has pushed to the furthermost reaches of two: the frontiers of both space and science.”

Watch several STS-79 video clips, including a tour of Mir conducted by Lucid.