Back to Top
Home/INSIGHT/This Month in NASA History: Lucid Arrives at Mir 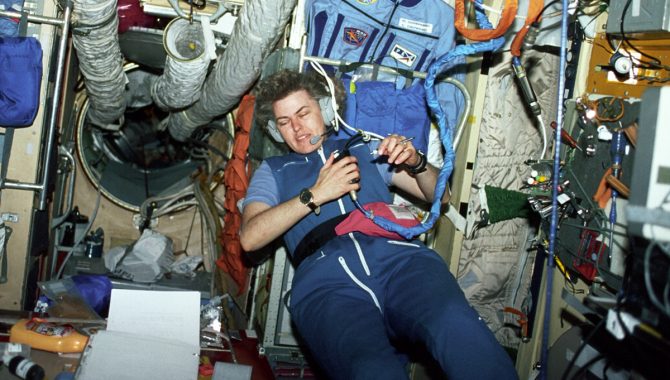 Lucid was born in Shanghai, China to parents who were Baptist missionaries and had traveled around the world twice by boat by the time she was five. Fascinated by tales of the American West, she dreamed of growing up to become an explorer, but worried that the world might not be big enough to need explorers by then.

“When I was a child, … I thought by the time I grew up that the world would [already] be explored, so what would be left for me to do when I grew up?” she recalled with a laugh during an oral history.

Then she read about the pioneering work that engineer and physicist Robert Goddard was doing in the desert outside Roswell, New Mexico, developing liquid-fueled rockets. At the same time, she began to read science fiction, and “… it just sort of clicked. ‘Well, you can go explore the universe and that wouldn’t get used up before you grew up.’ ” 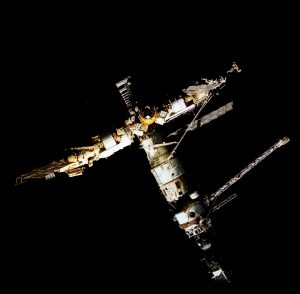 Backdropped against the darkness of space, Russia’s Mir Space Station is seen from the aft flight deck window of the Space Shuttle Atlantis.
Credit: NASA

STS-76 was the third shuttle mission to dock with the Russian space station, Mir. Atlantis arrived on March 24, with Chilton and Searfoss successfully docking the spacecraft at 9:34 p.m. ET. On this, Lucid’s fifth and final space flight, she would spend 188 days in orbit, including six months working aboard Mir, primarily with cosmonauts Yuri Onufriyenko and Yury Usachev, serving as Board Engineer 2 for a portion of Mir-21 and Mir-22.

Lucid, who holds a Ph.D. in biochemistry, joined NASA in 1978, one of the first six women selected to become astronauts by the Agency. She had spent a year training for the Mir mission in Star City, Russia, but recalled spending the majority of that time learning Russian with fellow NASA astronaut John E. Blaha, who would replace her on Mir later that year.

“People always think that [you] went over there and you trained with the crew. You didn’t go over there and train with a crew. … Only toward the end did we do just a very few sims with the Russian crew. I mean, we got in the Soyuz and went through a sim. But it was very, very minimal,” Lucid said.

Atlantis remained docked at Mir for five days, transferring supplies, scientific equipment, several experiments, and 1,500 pounds of water to the space station. During that time, Godwin and Clifford conducted an extravehicular activity in which they attached four experiments to Mir’s Docking Module to gather data about the environment surrounding the space station over the next 18 months.

Much of Lucid’s time on Mir was spent performing research and experiments, many focusing on the effects of microgravity on physical processes, such as how fire propagates, how wheat grows and develops seeds, or how heated metals crystallize as they cool in space. During her time on the space station, the seventh and final module, Priroda, arrived. Priroda, Russian for “nature,” was a 19-ton Earth observatory with about 60 cubic meters of pressurized space.

“Priroda was supposed to have been there before I got there, but it was delayed. It docked. Then Yuri and Yury and I worked together, and we got it all configured and ready to go as a laboratory,” Lucid recalled. “Priroda is where they had a lot of the U.S. experiments. So, … after Priroda got there and after it got reconfigured, that’s where I did most of the U.S. experiments.”

Lucid talks to Usachev (back) and Onufriyenko (front) at the work table in Mir’s Base Block.
Credit: NASA

Working through cultural differences and language barriers, the three crewmates developed a friendly and effective working relationship, dividing the considerable duties required to maintain a functioning space station, sharing meals together, and often finishing the long workdays with tea and cookies.

“Yuri and Yury were absolutely fantastic to work with. I mean, I could not have picked better people to spend a long period of time with,” Lucid recalled. Because Onufriyenko and Usachev couldn’t speak English, the crew spoke Russian exclusively, but with some modifications.

“I know that a lot of the times I wasn’t saying anything exactly correctly. A lot of times I would just take an English word and pronounce it like a Russian word, and put an ending on it, and that worked. You’d be surprised the number of times that worked,” Lucid recalled with a laugh. “Yuri, as a joke, said, ‘Well, we’re developing a new language, a cosmic language.’ And there was a fair amount of truth to that.”

Lucid, an avid reader, was given a weight limit on the number of books she could bring on the flight. During her training, she asked her daughter to search for books with the most words per page, and that led to a selection heavily weighted to classic English authors.

“It really sort of brought home the power that authors have. Here I was, I was reading David Copperfield and Bleak House. I thought, ‘Wow, here was [Charles Dickens] who lived in a totally different era than we’re living, and it never ever crossed his mind that his book would be read … by an American, on a Russian space station.’ ”

On September 19, 1996, Atlantis docked with Mir again, this time on STS-79. On September 24, 1996, Lucid left Mir on Atlantis, with Blaha taking her place aboard the Russian space station, continuing an American presence that would extend for two years.

Delays had added six weeks to Lucid’s stay in orbit, giving her the record for longest female space flight, a record she would hold for more than a decade. By the time the shuttle landed at Kennedy Space Center on September 26, 1996, Lucid had traveled 75.2 million miles. She was awarded the prestigious Congressional Space Medal of Honor in 1996 for her achievements on Mir. Lucid went on to serve as NASA Chief Scientist from 2002-2003 and lead CAPCOM on 16 of the final shuttle flights. She retired from NASA in 2012.