Back to Top
Home/INSIGHT/This Month in NASA History: “Lifting Bodies” Come to a Landing 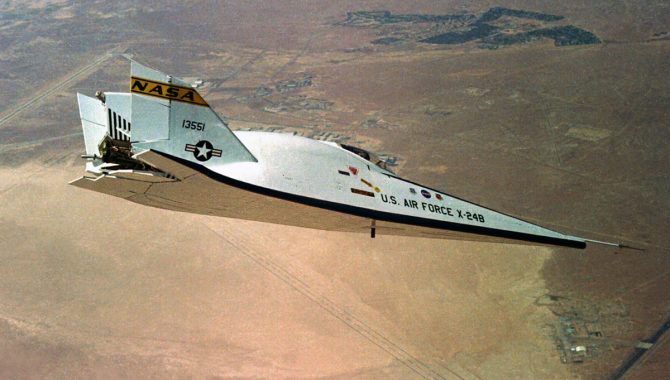 The X-24B over the Mojave Desert near Edwards Air Force Base. The aircraft’s unique shape earned it the nickname “Flying Flatiron.”
Credit: NASA

The X-24B marks the end of a program that informed Shuttle design.

On August 5, 1975, in the skies over Southern California, NASA’s modified B-52B “Mothership” was cruising at 45,000 feet. Secured beneath its right wing was the X-24B—a thick, angled aircraft with small fins instead of wings. The shape earned the X-24B the nickname “Flying Flatiron.” It was the last in a series of “lifting body” aircrafts that began flying in 1963.

At the controls this Tuesday was research pilot John Manke, who had flown the X-24B to an altitude of 74,100 ft. earlier that summer. Manke was an accomplished pilot who made 42 flights in lifting body aircraft. The goal for this flight, however, was a landing of greater precision than had ever been attempted before.

The lifting bodies trace their origins to the 1950s and research by Dr. Alfred J. Eggers Jr., Harry Julian Allen and a team of engineers working at what is now the NASA Ames Research Center at Moffett Field, California. Allen’s early work on atmospheric reentry found that a spacecraft with a blunt nose would increase drag while producing a detached shockwave, which reduces heat transfer. This research would become important in the then nascent space program.

Eggers discovered that modifying the shape of a nose cone could produce aerodynamic lift. This lift could enable a spacecraft to be flown back to Earth, rather than plunging through the atmosphere and landing in an ocean.

The work by Eggers, Allen and a team of engineers was reflected in the design of the first lifting body, the M-2, which featured a blunt nose cone that was flat on top and round on bottom and two tail fins. The aircraft obtained aerodynamic lift not from wings, as a typical aircraft does, but from its body shape. Fins and control surfaces provided pilots the ability to control a lifting body, although some compared the experience to flying a brick. 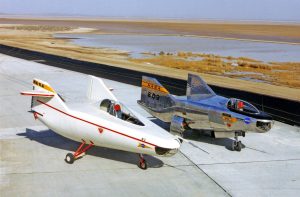 After the M2-F1 (left) proved the lifting-body concept, NASA and the Air Force began work on a series of heavyweight, rocket-powered lifting bodies able to reach supersonic speeds and altitudes up to 90,000 feet. The M2-F2 (on the right) was the first of these heavyweights.
Credit: NASA

The program’s beginnings were modest. The first lifting body, the M2-F1, was a plywood shell over a tubular steel frame. It was nicknamed the “Flying Bathtub,” and for its first flight, it was towed behind a Pontiac convertible, racing across Rogers Dry Lake in the Mojave Desert, until the aircraft gained altitude. Early flights produced valuable data that drove the program forward.

When the X-24B was released from the Mothership that day in 1975, Manke ignited the XLR11 in a burst that propelled the aircraft to an altitude of 60,000 feet. After he shut down the rocket engine, Manke did something no other lifting body pilot had ever done. He began looking for a 15,000-foot-long, 300-foot-wide concrete landing strip at Edwards Air Force Base. Up to this point, the lifting bodies had all landed on a massive dry lakebed in the Mojave Desert, 44-square-miles, which gave the pilots a significant margin for error in landing the awkward aircrafts.

Gliding in the X-24B, with a low lift-to-drag ratio, Manke approached the runway, increasing the rate of descent to build speed before performing a “flare out” maneuver that slowed the aircraft to a landing speed of about 200 miles per hour. Manke landed on target.

The landing was significant because it demonstrated that a low lift-to-drag vehicle could be glided from a high altitude to a precise landing. The maneuvers Manke made 45 years ago, at a time when the Space Shuttle was in development, set the stage for how the world’s first reusable spacecraft would return from near Earth orbit and glide to a landing.

Later, Manke would say, “We now know that concrete runway landings are operationally feasible and that touchdown accuracies of plus or minus 500 feet can be expected.” Love duplicated the precise landing later in August. This enabled the shuttle design team to drop preliminary plans to include auxiliary jet engines for landing approaches.

The X-24B continued to fly into late September 1975 before it was retired. It is now on display at the National Museum of the United States Air Force at Wright-Patterson Air Force Base, outside Dayton, Ohio.