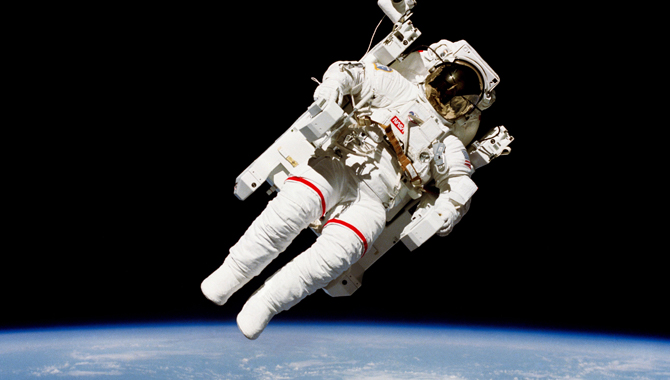 On February 3, 1984, 36 years ago this month, the Space Shuttle Challenger launched from Kennedy Space Center on a mission known as STS-41-B. The mission produced one of the most iconic photographs of the U.S. space program—an image of astronaut Bruce McCandless II high above Earth on the first untethered spacewalk.

McCandless was a member of NASA’s Astronaut Group 5, a prestigious group of 19 selected in 1966 to join the rapidly growing space program in the midst of the race to the Moon. That group, which also included Vance D. Brand, commander of STS-41-B, made significant contributions to the Apollo, Skylab, and the Space Shuttle programs.

In addition to Brand and McCandless, the crew included pilot Robert L. Gibson, and mission specialists Robert L. Stewart, and Ronald E. McNair, all on their first spaceflights. Gibson recalled that Brand worked hard to bring the crew together outside of work. “They were an interesting crew,” said Gibson, in an oral history. “We got to be really good buddies. In fact, we did a 25-year reunion out in Colorado.”

Brand, who was the Command Module Pilot for the Apollo-Soyuz Test Project mission in 1975, had worked on Space Shuttle development in the mid-1970s, recalling, “We were all enthusiastic about the Shuttle coming up. It seemed like it would be impossible back then to get [so much] ready so it would actually fly. But we worked with marvelous engineers at NASA and the companies involved. So, I was doing a lot of flying, a lot of simulating.” 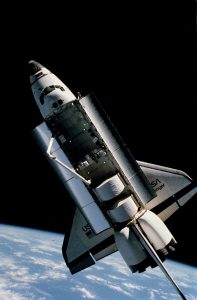 A fixed camera on astronaut Bruce McCandless II’s helmet recorded this rare scene of the Space Shuttle Challenger some 50 to 60 meters away.
Credit: NASA

This was Brand’s second shuttle mission, having commanded STS-5, the first mission in the program to carry and deploy commercial satellites. Although the satellite deployment was successful, the mission’s scheduled EVAs (extravehicular activity) were cancelled because of issues with the astronauts’ space suits.

“Well, I guess I was the bad guy,” said Brand, in an oral history. “As much as I hated to, I recommended to the ground that we … [cancel] the EVAs, because we had a unit in each spacesuit fail in the same way. … You just don’t want to do anything dumb. Well, if you [can] say something [is] a little less than perfectly safe that’s one thing, but if you [get] up there and [get] into a lot of trouble you’d really regret it.”

On STS 41-B, the situation was reversed. The crew deployed two communications satellites early in the mission, but neither reached geosynchronous orbit after booster rockets on both satellites unexpectedly shut off after only about 20 seconds. The EVAs, on the other hand, were a spectacular success.

“That was a really nice reward for Bruce McCandless, who had worked on EVA [Extravehicular Activity] and worked with the MMU [Manned Maneuvering Unit] and all the development and all the training and the engineering for years and years and years. It’s one of those just rewards that he got to be the first one to fly the MMU. He and Bob Stewart, of course, trained extensively on that to get to do that,” Gibson recalled.

On February 7, and again on February 9, McCandless and Stewart strapped into the MMUs and walked untethered in space. The MMU was about 33.25 in. wide, 28 in. deep, and 50 in. tall. Its aluminum frame held two Kevlar wrapped aluminum tanks filled with nitrogen. That was enough propellent for an EVA of more than six hours.

“It was supposed to be an early-day Buck Rogers flying belt, if you know what I mean, except it didn’t have the person zooming … real fast,” recalled Brand. “It was a huge device on your back that was very well designed [and] redundant so that it was very safe, but [it] move[d] along at about one to two or three miles per hour. It used cold nitrogen gas coming out in spurts to thrust you around and everything.”

McCandless and Stewart moved approximately 100 yards from the Shuttle and returned multiple times over the EVAs. Both the astronauts and the shuttle were traveling nearly 18,000 miles per hour. The crew members inside the shuttle, who had practiced their roles in the EVA many times, were tracking their movements with Challenger’s radar and other instruments. 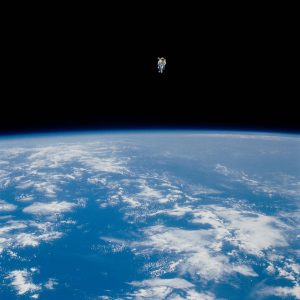 Astronaut Bruce McCandless II, 41-B mission specialist, reaches a maximum distance from the Challenger before reversing direction his manned maneuvering unit (MMU) and returning to the Challenger.
Credit: NASA

“The trick was not to let [the EVA crewmen] get too far out, such that orbital mechanics would take over and separate us,” Brand said. “We didn’t want them lost in space. We didn’t want to come back and face their wives if we lost either one of them up there.”

If the spacewalking astronauts had begun to pull away, Brand had a plan to chase them and maneuver the shuttle so that McCandless and Stewart would have found themselves inside the payload bay, where they could have grabbed onto handles and maneuvered their way to safety. Fortunately, the EVAs didn’t require such contingency procedures. Gibson, a photography enthusiast who had relished his photography training with NASA, captured the iconic images of the spacewalk.

STS-41-B was the first shuttle mission to land at Kennedy Space Center, from where it had launched nearly eight days earlier. “When it came time to do it, it was sort of a no-brainer, you know, it’s just landing at another place,” Brand said. “You saw greenery going by at the Cape instead of [the] desert plants at Edwards [Air Force Base] and that sort of thing. The Cape was a beautiful place to land, and we were very happy to get to be the first guys to do it.”