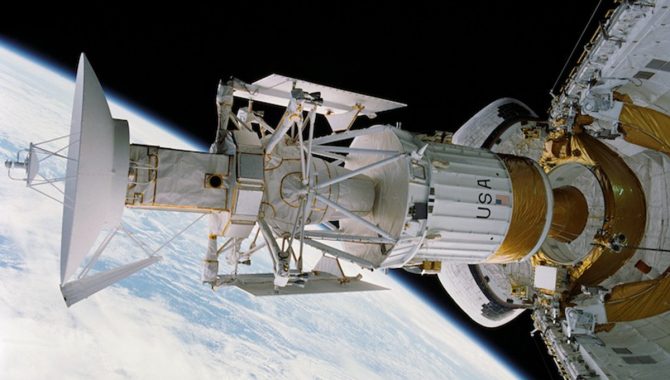 The crew of STS-30 deploys the Magellan probe to Venus, the first planetary spacecraft to be launched from the space shuttle.
Credit: NASA

In the early afternoon of May 4, 1989, the crew of STS-30 patiently waited in the Space Shuttle Atlantis as a 64-minute launch window slowly slipped away. A launch attempt on April 28 was scrubbed at T-31 seconds and the crew began to relax again, as NASA held the count at T-5 minutes monitoring low clouds and light wind gusts that might postpone the launch. But with conditions improved and with just five minutes left in the launch window, STS-30 launched.

The Commander of the mission was David M. Walker, an accomplished aviator with extensive experience flying F-4 Phantoms and F-14 Tomcats. The Pilot was Ronald J. Grabe, also an accomplished aviator who studied aeronautics as a Fulbright Scholar in 1967 and logged more than 5,500 hours flying time. Both men were making their second spaceflight. The mission specialists for STS-30 were Norman E. Thagard, Mary L. Cleave, and Mark C. Lee.

In the payload bay was Magellan, a space probe comprising a 10-sided aluminum bus and an equipment module mated to the dependable Inertial Upper Stage (IUS) booster, topped by antennas and flanked by solar panels that were extended after deployment. Fully loaded with propellant, Magellan weighed 7,612 pounds. It was about 21 feet tall and 15 feet in diameter. 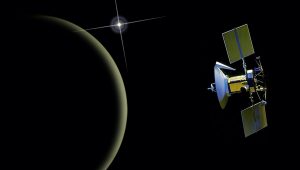 The Magellan spacecraft, which arrived at Venus in 1990, made the first global map of the surface of Venus as well as global maps of the planet’s gravity field.
Credit: NASA/JPL

Magellan was bound for Venus, the first NASA mission to Earth’s “sister planet” since The Pioneer Venus Orbiter and Multiprobe arrived there in 1978. Magellan was a resourceful project with an ambitious objective—orbit the planet, capturing radar images of the surface to develop a topographic map. Magellan’s bus utilized a host of spare parts from Voyager, Galileo, Ulysses, and Mariner 9. Magellan also repurposed a spare Voyager high-gain antenna to both communicate with Earth and for radar imaging.

Six hours and 14 minutes into the spaceflight, with the payload bay doors open, the crew of STS-30 raised Magellan 29 degrees and then on up to 52 degrees for the deployment. Activating a switch, a metal band released the IUS and springs pushed the probe out of the payload bay. Magellan deployed at about six inches per second at first, with the shuttle in free drift. Later the crew performed a burn to begin moving Atlantis away from Magellan. It was the first planetary probe deployed from a space shuttle.

Both NASA and the Soviet Union’s space program turned their attention to Venus early in the space race, sending robotic spacecrafts to the planet in the early 1960s, when mission failures were far more common, and it was not yet known how incredibly harsh the planet’s surface was.

NASA’s Mariner 2 became the first successful robotic space probe to encounter another planet in the solar system when it flew within 22,000 miles of Venus on Dec. 14, 1962, finding thick clouds and an incredibly hot surface. The Soviet Union’s Venera 7 was the first spacecraft to successfully land on Venus, sending a weak stream of data back to Earth for about 20 minutes from the surface in late 1970, recording a temperature of 887 degrees Fahrenheit and intense atmospheric pressure. 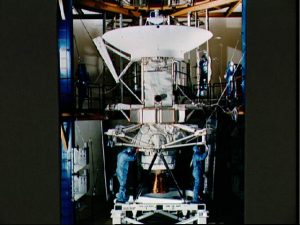 Magellan’s journey to Venus took 15 months. It arrived in August of 1990, beginning 50 productive months in orbit that would change scientific understanding of the planet. Magellan had already exceeded one of its key mission goals by the time it completed its first 243-day cycle, mapping 83.7 percent of the planet’s surface using synthetic aperture radar. Over the course of two more mapping cycles, that percentage rose to 98 percent, with many areas covered multiple times. Magellan also performed three additional mapping cycles in which it obtained gravimetric data.

Magellan’s maps revealed that the surface of Venus is exceptionally harsh, dominated by tens of thousands of volcanoes and vast channels of hardened lava, some thousands of miles long. While Venus is 4.6 billion years old, the surface appears to be much younger—about 500 million years old—pointing to a period of profound and transformative volcanic activity. The maps generated by Magellan reveal no evidence of past water, such as shorelines, or indications of plate tectonics, indicating the planet’s internal structure is likely far different than Earth’s, as well.

After deploying Magellan, the crew of STS-30 carried out several science experiments over four days in space, including one in which they filmed storm systems on Earth while flying over them, producing images of the complex discharges in the stratosphere that accompany lightning flashes at the Earth’s surface. Atlantis returned to Earth on May 8, 1989, landing at Edwards Air Force Base.