Back to Top
Home/APPEL News/INSIGHT/This Month in NASA History: The TIROS -7 Weather Satellite was Launched 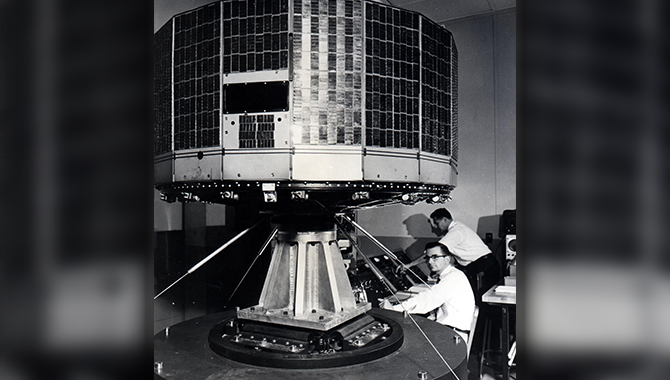 Fifty-five years ago, this month, NASA launched TIROS-7, a satellite that further validated the role the nascent technology would play in weather forecasting.

The modern, accurate weather forecasts available instantly on apps and websites have a long heritage that extends all the way back to launchpads at Cape Canaveral, Florida in the early 1960s. That’s when NASA engineers, scientists, and research partners first demonstrated the potential of satellites to record and track cloud formations with the Television InfraRed Observation Satellite (TIROS) program.

In the aftermath of World War II, researchers were eager to use emerging rocket and video communication technologies to gain a better understanding of weather, in part because of the important role weather played during the war. Just as a network of observers, connected by telegraphs, had greatly changed the ability to understand and predict weather in the 1800s, these researchers understood that gaining a wider perspective of cloud formations and movement from space would be a giant leap forward in forecasting.

The launch of TIROS-7 on June 19, 1963 was just six years into the age of satellites and three years into the TIROS program, which had already demonstrated, albeit with crude cloud photographs, the great promise weather satellites held.

The space craft was an 18-sided right prism, 42 inches in diameter and 19 inches high. The aluminum and alloy structural elements were covered with 9,200 1-by 2-cm silicon solar cells, which charged the nickel-cadmium (nicad) batteries that powered the onboard equipment.

The satellite was fitted with a range of scientific equipment, including two wide-angle TV cameras developed by RCA (Radio Corporation of America). The cameras automatically began photographing when the lens was trained on the Earth during daylight. Those photographs were then transmitted via PCM telemetry back to one of two receiving stations or stored on tape until TIROS-7 was within transmission range. Participants in the mission included NASA, RCA, the U.S. Weather Bureau (now the National Weather Service), the University of Wisconsin, and the University of Michigan.

TIROS-7 was launched on a three-stage, Thor Delta rocket from Space Launch Complex 17, a key launch site in the early 1960s at what is now Kennedy Space Center. The satellite was fitted with a sophisticated control system that included despin weights, north direction indicator, and magnetic attitude control. The base plate was fitted with three pairs of solid-propellant spin rockets.

TIROS-7 was operational for 1,809 days—a staggering 23 times longer than TIROS-1, which was launched just three years earlier. Over that span, TIROS-7 sent more than 30,000 images to Earth, each covering an approximate 1,200 km square. The images proved especially useful in showing hurricane formation and movement.

Following the first two years, TIROS-7 was programmed to only photograph portions of the Earth not already covered by previous images. After another two years, the spacecraft was used to collect engineering data for approximately 18 months.

In all, 10 TIROS satellites were launched, sending a total of 650.000 images back to Earth. The program demonstrated that satellites were a valuable tool in understanding weather patterns and formations and serves as the foundation for modern, vastly more sophisticated satellites.

“This initial remote-sensing effort was significant because it enabled Earth scientists to view our planet from a new perspective: space. For the first time, with the use of instruments flying on Earth-observing satellites, scientists were able to continuously view the entire globe,” said NASA and the National Oceanic and Atmospheric Administration, in a joint 1987 report to Congress.

“The capabilities and applications of satellite remote sensing have developed tremendously since TIROS’ first crude cloud pictures,” the report states.

TIROS-7 was destroyed by the Earth’s atmosphere on June 3, 1994. Data from the mission is available in the NASA Space Science Data Coordinated Archive.