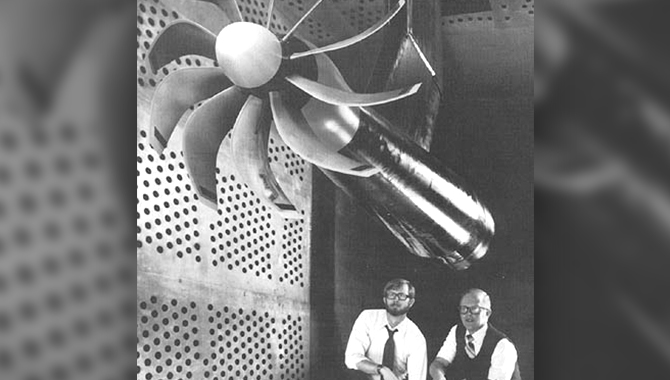 With the advent of turbojet engines, the commercial airline industry flourished. It was able to transport passengers at high speeds and high altitudes without the high levels of noise and turbulence associated with earlier propulsion systems. But in 1973, the industry was hobbled by the Organization of Petroleum Exporting Countries (OPEC) oil embargo. As oil became increasingly scarce, fuel prices soared from 12 cents a gallon to more than a dollar. Over the next few years, airlines were forced to cut down on flight offerings and lay off employees as they searched for a way to make flight operations more efficient.

To support the industry, in 1975 NASA formed the Aircraft Energy Efficiency (ACEE) program. The ACEE encompassed a number of projects at different NASA centers that were intended to conceive and develop novel technologies that would address the need for greater efficiencies in aviation. One such initiative was the Advanced Turboprop Project (ATP): an effort to update propeller-driven aircraft for high-speed commercial and military use.

The concept made sense: prop planes were inherently more efficient than those with jet engines. However, they had two significant disadvantages: at higher speeds, propellers lose their efficiency as they are forced to turn more quickly and burn more fuel; and they are very noisy. The first issue had to be overcome in order for the propellers to meet the airlines’ need for fuel savings, while the second problem had to be addressed in order for passengers to accept the technology. As long as both concerns were resolved, NASA engineers estimated the resulting technology would produce a 20-30% reduction in fuel consumption. 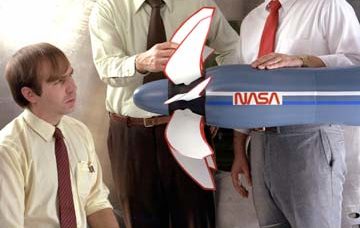 The project encompassed four stages. The first, which ran from 1976 to 1978, was concept development. During that time, engineers from Lewis and Hamilton developed a small, single-rotating propeller fan that featured just one row of blades. Based on the success of that small-scale model, the project moved into full development. From 1978 to 1980, engineers on the joint agency-industry team focused on developing technology that would allow turboprop-driven aircraft to achieve the flight speeds of turbojet-propelled planes while maintaining a crucial level of efficiency. They also concentrated on reducing the noise associated with propellers.

The result of their work was a unique concept: the sweeping propeller, whose curved blades differed from standard straight-bladed propellers to increase efficiency at high speeds while lowering the related noise. A further innovation was a design that enabled the propeller and the turbine engine that powered it to operate at separate speeds. This allowed the propeller to turn slowly—maintaining efficiencies—while the turbine rotated quickly, providing thrust for greater speed.

With the technology established, the ATP entered the large-scale integration phase. From 1981 to 1987, engineers constructed and tested several large-scale, single-rotating prop fans. The final version—nine feet in diameter—was too large to be tested in a U.S.-based wind tunnel. Instead, it was sent to a wind-tunnel in France, where it operated successfully at Mach 0.8. That was fast enough to replace turbojet engines on commercial aircraft. In 1986, the Hamilton Standard SR-7A prop fan was combined with a turboshaft engine and gearbox developed by GM’s Allison Gas Turbine division, and underwent 50 hours of stationary tests. Based on the success of those tests, the ATP was cleared for flight testing.

But there was a shadow over the project. While NASA and its industry partners were working on the ATP, GE was quietly developing its own proprietary turboprop technology. In 1983, GE presented NASA with its design for the “unducted fan,” which involved two counter-rotating propellers. NASA Lewis was instructed to work with GE to facilitate the development of their concept. The result was a counter-rotating system that pushed the plane into flight rather than pulling it through the air. Following technology development at Lewis, GE conducted stationary tests in 1985, which demonstrated a 20% fuel conservation rate. In 1986, GE put their counter-rotating pusher system on a Boeing 727 for a successful flight test that proved their concept was viable. 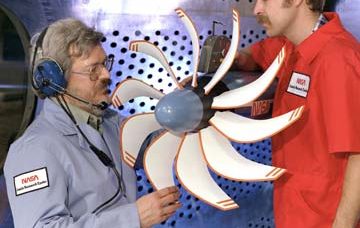 It was another year before the NASA/industry-developed single-rotating turboprop system flew. In 1987, the element was incorporated into a modified Gulfstream II for flight tests in Georgia. The results were outstanding: the engine produced a 20-30% reduction in fuel consumption. Although some of their thunder had been stolen by GE’s efforts, together the two technologies established the validity of the advanced turboprop concept.

Unfortunately, commercial airlines and the military no longer wanted the technology. By 1987, fuel prices had dropped significantly: not to ultra-low pre-1973 levels, but to levels that made jet engine propulsion affordable again. Changing jet engines to advanced turboprops across a fleet of commercial or military aircraft would be expensive. Furthermore, despite the efforts of NASA and industry engineers, the turboprop engines were still louder than jet engines. Faced with the expensive of incorporating the new technology and the potential for dissatisfied customers due to increased noise levels, the airlines and the military decided to forego the fuel consumption advantages of the advanced turboprops and stay with what they already had.

From 1976 to 1987, the ATP successfully smashed through technological boundaries to deliver a novel form of propulsion that met modern needs for speed while reducing fuel consumption. The project spanned four NASA centers—Lewis, Langley Research Center (LaRC), Dryden Flight Research Center (now Armstrong Flight Research Center (AFRC)), and Ames Research Center (ARC)—and at one point included 40 industry contracts and 15 academic grants. The size of the project was of a scale that reflected the agency’s space programs rather than its aeronautics programs. The result—though not ultimately adopted—was potentially industry transforming. This achievement was recognized by the National Aeronautic Association, which awarded the Collier Trophy for the greatest achievement in 1987 in aeronautics to the NASA Lewis Research Center and the NASA/industry advanced turboprop team. In the years since, ATP technology has contributed to a range of aeronautical advances and remains ready to be revisited should fuel conservation become a concern for the airlines industry in the future.

Learn more about the ATP in The Advanced Turboprop Project: Radical Innovation in a Conservative Environment by Mark D. Bowles and Virginia P. Dawson.