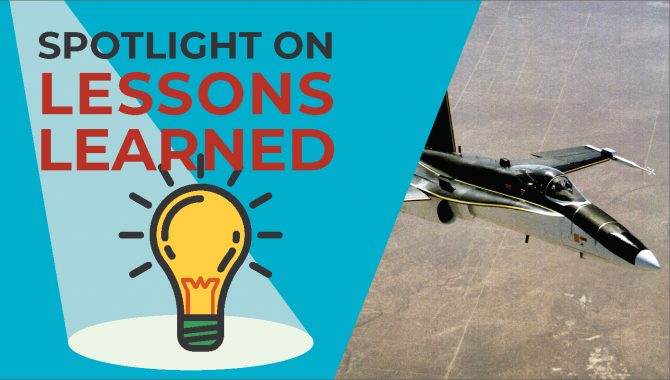 During a three-phased flight research project lasting from 1987 until 1996, NASA’s Armstrong Flight Research Center used an F-18 Hornet fighter aircraft as its High Angle-of-Attack (Alpha) Research Vehicle (HARV) and completed 385 research flights. The project was part of a formal program NASA initiated in the mid 1980s to explore and understand aircraft flight at high angles of attack – an aeronautical term describing the angle of an aircraft’s body and wings relative to its actual flight path.

A significant asset to the execution of the program was use of an all-inclusive steering committee of all stakeholders, which meant all voices were heard and consensus was achieved even when unanimous decisions were not reachable.

Armstrong Flight Research Center CKO Bradford Neal on the importance of this lesson learned:
Across all of its missions one of NASA’s most important contributions is the accomplishment of leading-edge research and technology development. Research and technology development may not be a program or project’s primary objective, but some aspect exists in each that the agency does. Establishing paths of communication and program expectations with all stakeholders is key to a project’s success. Good communication and well-established expectations can greatly mitigate and then assist in the overcoming of the inevitable disruptions that occur from the discovery and learning that are part of research and development efforts. They can also mitigate our often optimistic views of technology maturity and our abilities to develop multiple technologies in parallel on missions that have never been attempted before.