Back to Top
Home/INSIGHT/Widow Provides Perspective on Columbia Accident 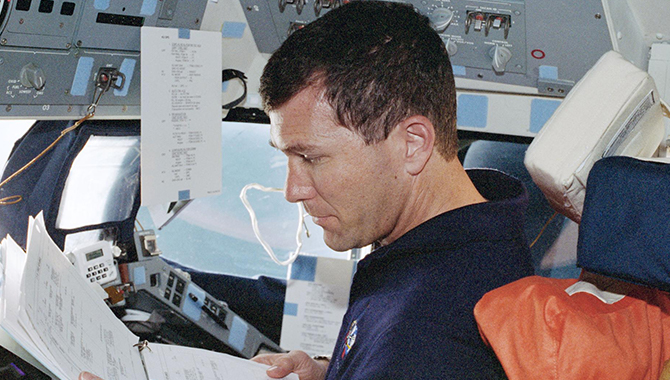 Astronaut Rick D. Husband, pilot, reads over the flight data file at the pilot's station on the starboard side of Discovery's forward cabin during a mission in 1999.
Credit: NASA

NASA is known for stunning technological achievements such as those that are now orbiting the Sun, exploring the Kuiper Belt, and traveling through interstellar space. The one constant, however, in all NASA programs and projects is the human factor. That took center stage at the first stop of the Space Shuttle Columbia National Tour, at Kennedy Space Center, from April 8-12. The tour concluded with a townhall in which speakers noted the role human decision-making played in the Columbia disaster, and how it made the recovery process more complex.

The Space Shuttle Columbia National Tour was developed by the Apollo Challenger Columbia Lessons Learned Program, with support from APPEL Knowledge Services, to bring the lessons learned from Columbia to a new generation of NASA’s technical workforce. Mike Ciannilli, the agency’s manager of the Apollo, Challenger, Columbia Lessons Learned Program, discusses the tour on a recent episode of the Small Steps, Giant Leaps podcast. 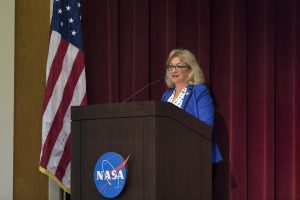 The keynote address illuminated the high human cost of the tragedy. Evelyn Husband Thompson, widow of STS 107 Commander Rick Husband, discussed their lives together and the trauma of February 1, 2003, when Columbia broke apart over Texas, 16 minutes before it was scheduled to land in Florida.

Rick Husband was born in Amarillo, Texas in 1957. Some of his childhood memories, he said in a preflight crew interview, were of looking up into the sky as airplanes flew over West Texas, asking “Where’s that airplane? What kind is it? Where is it going? How high is it? How fast is it going?”

He and Evelyn attended the same Amarillo high school and met when they were both Texas Tech students during a Red Raiders basketball game on January 24, 1977. During their first date, four days later, Rick shared his long-held, ambitious life goals.

“The evening was a wonderful first date,” she said. “Dinner was at a local steakhouse in Lubbock and we went dancing afterword. During the meal I asked him a lot of questions just to get to know him a little bit better. … He shared with me that he had wanted to be an astronaut since he was four years old. I was obviously very incredibly fascinated with that. He also shared that he had briefly wanted to be a Dallas Cowboy, but that seemed unreachable.”

So began a five-year courtship that would lead to marriage in 1982. Rick tenaciously pursued the ambitious career path he had laid out years earlier, logging more than 3,800 hours of flight time, earning a master’s degree in mechanical engineering, and applying to NASA four times to become an astronaut.

His first mission was STS 96, in May 1999. The couple’s children, Laura and Matthew, were eight-years-old and three-years-old. “We loved being in Florida and especially the excitement of the launch,” Husband Thompson said.

STS 107 was his second mission. It launched on January 16, 2003. The family communicated via email and two videoconferences. The second was on January 28, 2003, which was the 26th anniversary of their first date. Later that morning, Rick Husband remembered the crews of Apollo 1 and the Space Shuttle Challenger, which had exploded during launch 17 years earlier.

“I did not know that I had already spoken with Rick for the last time. And only a few days later, we would be in the forefront of yet another NASA tragedy,” Husband Thompson said, before recounting the confusion and pang of February 1, 2003, as the crew’s families waiting near the landing site as the mission clock counted down.

“…About a minute out, I remember turning to [astronaut] Steve Lindsey, who was … a family escort, and he was standing next to me. I remember asking Steve, ‘When are we supposed to hear the sonic boom?’ And, instead of responding to me, Steve’s phone rang. … I just had the feeling in my gut that something was wrong, but not to the extent of what was about to happen. That was my first feeling of fear,” Husband Thompson recalled.

With her children by her side as the landing clock reached zero, Husband Thompson recalled, a beautiful, clear morning had suddenly turned cloudy.

The families were taken back to crew quarters, where they waited to learn what had happened. The sad, sympathetic faces they found there foretold the ultimate outcome. But it was when she called her father that she knew. “He was a home in Amarillo. He answered the phone, sobbing, so that wasn’t good. I asked him if Rick was okay and he said, ‘No.’”

“I remember telling Laura and Matthew that I had absolutely no idea how this was all going to go, but I knew that the Lord would take care of us. I didn’t even know how to pray. I just knew that we needed help,” she said.

“He was a great dad, he was a great husband and it was a massive, massive loss for us. Many of you [did] not have the privilege of knowing these precious people like I did. They were precious, amazing, interesting people and being an astronaut was not the only thing that defined them—they were all remarkable,” Husband Thompson said.