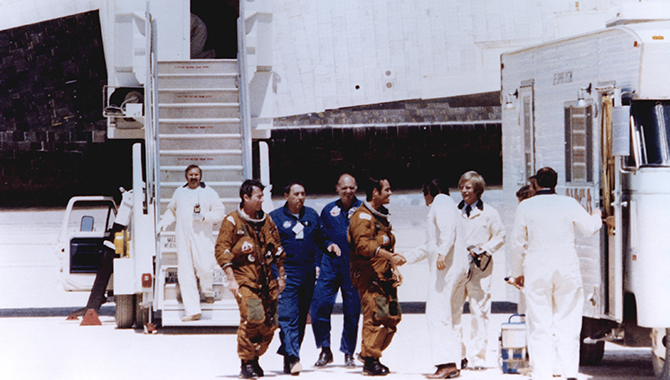 Following the successful landing of the Space Shuttle Columbia, America’s first-ever reusable spacecraft, at Edwards Air Force Base on April 14, 1981, STS-1 Commander John Young and Pilot Robert Crippen (in tan space suits) were greeted by members of the ground crew.

On April 12, 1981, the Space Shuttle Program took off with Space Transportation System 1 (STS-1): the maiden voyage of the orbiter Columbia.

Discussions about how to revolutionize human spaceflight after the Apollo Program began in the 1960s. A key focus was on developing a reusable spacecraft. Designed to splashdown in the ocean, NASA’s previous human-rated vehicles—the Mercury, Gemini, and Apollo capsules—were not reusable. To increase cost efficiencies, the agency was interested in developing a spacecraft that could fly effectively in space yet land precisely on a runway, like an airplane, allowing it to be used again for future flights.

This concept had a precursor in the X-15 program, which ran from 1959-1968. The so-called spaceplanes were equipped with both conventional aerodynamic controls for flight within Earth’s atmosphere and reaction controls to soar through space. After being dropped from the wing of a B-52 at 45,000 feet, the X-15 planes fired up their jet engines and blasted away, going so fast and so high that some of them left the atmosphere entirely. On their return, the spaceplanes glided to a landing on the dry lake bed at Edwards Air Force Base. The work of this program proved—among other things—that a single craft could fly effectively both within and outside of Earth’s atmosphere and then land on a pre-determined site, enabling it to be used again.

Another initiative that contributed to the development of the space shuttle was the joint NASA-Air Force lifting body program. From 1963-1975, the program introduced six experimental aircraft models that eventually proved a wingless spacecraft could reenter Earth’s atmosphere and lane safely and accurately without fuel. This information was essential to the design of the space shuttle because it confirmed that the orbiter did not need to shoulder the extra cost and weight of jet engines and their fuel, which would be required for a powered landing. Instead, the shuttle could reenter the atmosphere and glide to a precision touchdown on a runway. This had two benefits: a controlled landing would ensure the spacecraft could be reused while an unpowered touchdown would enhance cost efficiencies and increase the scientific value of the shuttle missions by enabling the orbiters to carry larger payloads.

The contract for development of Columbia, the first orbiter, was awarded in 1972 to Rockwell International, based in Palmdale, CA. But before construction began on Columbia, Rockwell built a prototype: a high-altitude glider called Enterprise. Constructed in less than a year, Enterprise was a full-scale orbiter prototype designed to conduct in-atmosphere flight tests that would validate shuttle systems and hardware. Enterprise flew for two years, eventually confirming that a space shuttle could approach and land precisely without air-breathing engines after reentering Earth’s atmosphere. It also validated the onboard control systems that the orbiter would use.

Work on Columbia, meanwhile, was ongoing. Construction began in March 1975 and continued until 1979. After completion, Columbia was transported overland to Dryden Flight Research Center (now Armstrong Flight Research Center (AFRC)) and then to Kennedy Space Center (KSC) on the Boeing 747 Shuttle Carrier Aircraft (SCA). The orbiter underwent testing at KSC from 1979-1981 before being declared ready for flight.

The goal of its first mission was straightforward: to demonstrate a safe launch as well as orbital flight and a touchdown on land that preserved the vehicle for future use. To accomplish this task, NASA selected two astronauts: Commander John Young and Pilot Robert Crippen. Young was an experienced astronaut. He’d already flown four missions in space, including serving as the commander on Apollo 16, during which he had walked on the moon. Crippen, a Navy test pilot, had never flown in space before but was an expert in the orbiter’s computer systems.

The mission carried two payloads to assess the performance of the shuttle. The Developmental Flight Instrumentation (DFI) contained sensors and measuring devices to record Columbia’s performance and note any stresses that occurred during the mission. The Aerodynamic Coefficient Identifications Package (ACIP) pallet held equipment to record the temperatures, pressures, and acceleration levels experienced at different points on the orbiter.

On April 12, 1981, just after 7 a.m. ET, the nation’s first reusable space shuttle blasted off from KSC. The solid rocket boosters and external fuel tank separated flawlessly from the spacecraft. Once in orbit, the science instruments began recording the vehicle’s performance. The crew checked out different aspects of the shuttle, which included opening and closing the payload bay doors. While the doors were open, they saw something disturbing: some of the tiles that made up the orbiter’s heat shield were damaged. The crew reported their findings to Mission Control, which used ground-based telescopes to assess the situation. They noted that more than a dozen tiles appeared to be missing along the Orbital Maneuvering System (OMS) pods, which housed the thrusters used to direct the shuttle while in orbit. Ultimately, Mission Control concluded that the missing tiles were located in an area that wouldn’t present a danger on reentry. Their greater concern—not shared with the crew at the time—was that they couldn’t see the belly of the shuttle. Similar tile damage in that location could present a more serious problem, as the underside of the orbiter required an intact heat shield to withstand the extreme temperatures experienced when reentering the atmosphere. Nonetheless, the decision was made to proceed and the duration of the mission continued largely as planned.

Two days after launch, on April 14, Columbia returned to Earth. For 15 long minutes, radio signals between the shuttle and ground control were blocked as the orbiter reentered the atmosphere. Then Columbia appeared on radar with all systems functioning properly. At 10:20 a.m. PT, the orbiter landed on the dry lake bed at Edwards Air Force Base, just as the X-15 planes had done years earlier. Over 300,000 people were on site to celebrate the successful touchdown.

During its two-day, six-hour, and 20-minute flight, Columbia orbited the earth 36 times and traveled more than a million miles. After landing, the shuttle was put on the Boeing 747 SCA and flown back to KSC. There, ground crew discovered that, in addition to the 16 tiles missing on the OMS, 148 additional tiles had been damaged. The heat shield was then repaired as other maintenance work was conducted in preparation for the orbiter’s next flight, which took place on November 12, 1981.

Columbia went on to fly a total of 28 missions over nearly 22 years. The final flight, STS-107, began on January 16, 2003 and came to an end during reentry on February 1 when a mishap resulted in the deaths of all seven crew members. Their work, however, was not done. Since then, through such initiatives as the Columbia Research & Preservation Office and the Apollo Challenger Columbia Lessons Learned Program (ACCLP), Columbia and her crew have continued their mission by serving as a unique resource for advancing the safety and reliability of manned spaceflight. Within the agency and across the world, artifacts and other information from the orbiter continue to help inform understanding of issues that arise in human spaceflight as part of an effort to ensure NASA’s future mission success by fully understanding the past.

Read Preserving the Past to Enhance Future Success: a two-part interview about the ACCLP. Part One is here, Part Two can be accessed here.

Learn more about the X-15 program.

Find out about the lifting body program, including the final flight in the program.