Back to Top
Home/APPEL News/INSIGHT/This Month in NASA History: Skylab was Saved 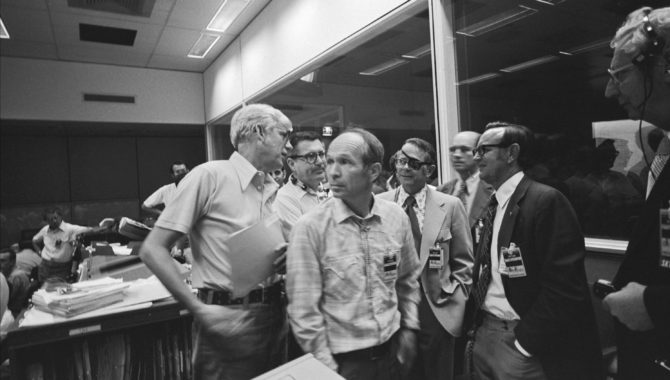 Forty-five years ago this month, a crew of three NASA astronauts set off to rescue the first U.S. space station: Skylab.

Skylab was conceived in the 1960s to facilitate science-based human spaceflight missions using hardware that had been introduced for the Apollo program. The goal was to create an on-orbit station that crew could live in and utilize to conduct scientific experiments in space. By the time it was ready for operation in 1973, the space station featured a solar observatory called the Apollo Telescope Mount, two docking ports, an airlock module that included hatches for extra-vehicular activities (EVAs), and an orbital workshop, which served as the main habitat area as well as the lab where experiments would be conducted.

On May 14, 1973, the space station lifted off from Kennedy Space Center (KSC) on a Saturn V: the same launch vehicle that sent humans to the moon during the Apollo Program. Barely a minute after launch, it became apparent that something had gone very wrong. The micrometeroid shield, designed to protect Skylab from debris and shade it from the glare of the sun, had deployed prematurely. Large chunks of it were completely torn away. This caused the deployment of one of the solar panels, which was also ripped off the station. Although the other solar panel deployed as planned, it got jammed partially shut by a piece of the broken micrometeroid shield.

Despite the damage accrued during launch, Skylab achieved its operational orbit. Due to the missing solar panel and largely inoperative second panel, however, it generated very little power. Just as problematic was the loss of the micrometeroid shield, as it left the space station unshaded from the blistering heat of the sun. The interior of the station quickly began heating to unsafe levels.

To salvage the station, something had to be done—and quickly. NASA always intended to send crew to the station shortly after the launch of Skylab. In fact, the first team of three astronauts had planned to leave KSC a day later, on May 15. However, once the extent of the damage was assessed, the crew was held back in order to train on appropriate repair techniques to restore the space station to operational status.

For 10 days, the crew practiced how to repair the station while engineers on the ground worked to conceive of solutions to the damaged solar panel and the increasing heat issues. Without the micrometeroid shield, temperatures within the space station quickly became high enough to release dangerous toxic materials. Before the crew could head for the space station, ground controllers flushed the inside of Skylab with pure nitrogen to clear the poisonous gases. They repeated the action three more times before refilling the space station with a mixture of nitrogen and oxygen in preparation for the crew’s arrival.

Commander Charles C. Conrad Jr., pilot Paul J. Weitz, and scientist Joseph Kerwin—the first American physician in space—left KSC on May 25, headed for Skylab aboard an Apollo Command/Service Module (CSM). Upon reaching the station, they flew around to assess the damage before attempting to release the jammed solar array. Conrad maneuvered the CSM in close so that Weitz could conduct a standing EVA. With Kerwin clutching his legs to provide stabilization, Weitz spent nearly an hour trying to free the panel using a hooked 10-foot pole. But the power source remained only partially deployed.

Abandoning the panel for the night, the crew attempted to hard dock the CSM to Skylab. Nine times they tried to latch the CMS’s nose onto the station docking port without success. It looked as though they might have to return to Earth without completing their mission. Before that could be suggested, they modified the docking probe on their vehicle using jumper cables and managed to link the two spacecraft.

The next day, from inside the station, they concentrated on lowering the temperature to sustainable levels. Using a narrow airlock intended as a camera port, the crew spent about four hours working to deploy a collapsible parasol, which was designed to open and serve as a thermal shield for the station. Finally, they succeeded. The ingenious solution, which was conceived by NASA Technical Services Chief Jack Kinzler, earned him the NASA Distinguished Service Medal.

With the heat shield in place, the focus returned to the jammed solar panel. If it refused to open fully, the space station wouldn’t generate enough power to sustain crew and enable the workshop to conduct critical scientific experiments. Conrad and Kerwin took on the task. Tethered to Skylab, they exited the station and began working on the panel, attempting to dislodge the wedged chunk of micrometeroid shield. Suddenly, while Conrad was tugging on the panel, it broke free, flinging both astronauts into space. Fortunately, their tethers held. They made it back into the space station, which quickly began generating the needed power.

Altogether, Conrad, Kerwin, and Weitz spent 28 days on Skylab, setting a record for the longest human spaceflight at that time. They set other records as well: the greatest distance traveled in space, the largest mass docked in space, and the first successful return from a space station. During their 28 days on orbit, they conducted 392 hours of experiments, took roughly 29,000 images of the sun, circled the earth 404 times, and performed three EVAs totaling six hours and 20 minutes. The mission was a success.

On June 22, 1973, the astronauts splashed down safely in the Pacific Ocean. Two more Skylab missions followed. The first launched on July 28, 1973, and lasted 59 days. The second headed for Skylab in November 1973, where the crew remained for 84 days. Before leaving, they powered down the station. On July 11, 1979, Skylab met a fiery end as it burned up on reentry into Earth’s atmosphere.

Watch a video about the launch of Skylab and the efforts of the first crewed mission.

Learn more about the deorbiting of Skylab.