Back to Top
Home/INSIGHT/VPMC Guests Discuss Importance of Resiliency 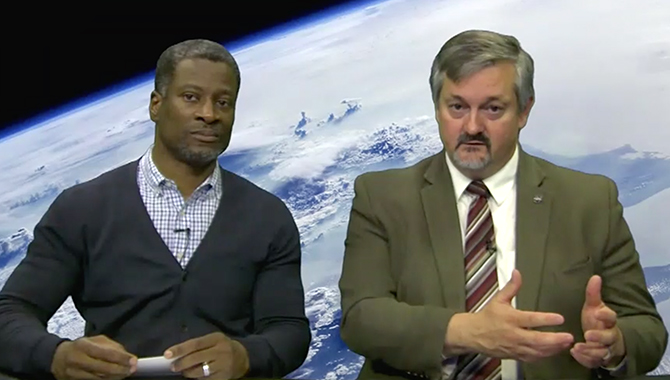 New session, available on demand, offers advice on how project managers can better deal with adversity.

Any great project manager knows that resiliency—both personally and within team members—is critical for success. But not everyone is born resilient. Rather, this ability to face adversity in its many forms and adapt to overcome it, is a skill that can be developed.

On May 1, 2019, APPEL Knowledges Services hosted a Virtual Project Management Challenge to address how effective managers achieve their goals even when their projects face ambiguity, volatility and challenges.

Host Ramien Pierre welcomed Doug Hensch, President of the DRH Group, and author of the book Positively Resilient: 5 ½ Secrets to Beat Stress, Overcome Obstacles, and Defeat Anxiety. Hensch said that during the first 30 years of his life, resiliency wasn’t his strong suit. He took rejection and failure personally and let it sap his energy going forward.

“I wasn’t doing things in the manner that I think was as effective as possible,” Hensch said.

Hensch, who learned resiliency and now coaches others through that process, said although resiliency is typically defined as bouncing back, “it’s a richer, deeper concept…” It also includes becoming aware enough to embrace your failures and develop the ability to learn from them, to be motivated by challenges and to have the opportunity to make meaningful connections with other people. 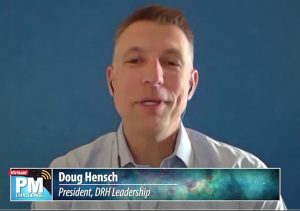 Hensch said that a person’s inherent personality, as well as their childhood experiences, can shape their resiliency and how they handle setbacks and failures. The struggles to balance work and personal life in today’s hectic world can also create issues.

Positively Resilient includes lists of techniques, backed by research, to improve personal resiliency. One of his personal favorites is journaling. Research indicates that consistently journaling helps a person untangle the thoughts and emotions that arise from difficult events.

“We put language to them so that there’s order as opposed to all these crazy thoughts going through our heads that are overwhelming to us,” Hensch said. “And I think that that’s as big part of why I talk about the idea that resilience doesn’t get rid of anxiety and adversity in your life. What it does, is allows you to be effective through these things.”

Pierre was joined live in the studio by Kevin Rivers, Director, Research Directorate, NASA Langley Research Center, who noted that adversity is multifaceted, encompassing not only technical challenges, but also the risk posture of a project and the interpersonal relationships on the team.

“So, all of those things kind of interplay into creating the adverse environment that you operate in. And frankly, for me, resilience is just the ability to continue to operate and produce,” Rivers said. “Resilience is the ability to change your plan and bring your team along with you as you change that plan moving forward towards the goal.”

Rivers noted that although many project managers feel the need to exercise tight control, resiliency is built in a team by disseminating as much control as possible to as low a level as possible. “There’s nothing wrong with being in control, but there’s a big problem when you over-control your project. And you do need to disseminate control to as low a level as possible in your organization. And let people have both the responsibility and the authority to get their work done. It doesn’t feel comfortable at first but eventually you start realizing that you’re making so much better progress.”

Rivers said that the emotional intelligence of a project manager, and how practiced they are with it is vital for developing resiliency. “You’re not an effective project manager if you’re the smartest technical person in the room. You’re just not. You actually need to surround yourself with smarter people than you to get the job done technically,” he said.

“Surround yourself with people who are awesome at the things that you are not naturally awesome at.”

“The resilient project manager is somebody that can bounce back in the face of uncertainty and when something happens that’s unexpected or is disruptive. And how they do that is dependent on where they are in their life,” Kytonen said, adding that resilience is like a muscle that takes time and practice to build.

Cuypers drew a distinction between resilience and robustness, noting that robustness is resisting a force—such as a setback or disappointment—via strength, whereas resilience connotates absorbing a force and changing yourself and your approach to adapt and overcome that force.

“But you should think, what is the wise thing to do? Should we just fight harder? Or should we absorb and change our game?” he asked. “And that is a basic mistake—trying to be robust where you should try to be resilient. [Resiliency is] most of the time the better option.”

Arcari said that a project manager can’t expect to know everything that is necessary for success on today’s complex, fast-moving projects. Rather, a resilient project manager embraces and leverages their strengths while assembling a complementary team.

“Surround yourself with people who are awesome at the things that you are not naturally awesome at,” Arcari said.

Cuypers agreed that project managers can fail to understand that resiliency is a group effort, noting that a team is only as strong as its weakest link. “It’s not about you being resilient. It’s about your team being resilient. You have your good moments, your bad moments. And by the end of the day you fix it together.”

Consor noted that she built resiliency through navigating the roadblocks in her way while working in many different professional environments. “You have to be creative in these situations to get things done,” she said.

Kytonen explained that growing in resiliency as a project manager means retraining yourself to be aware of the signs and the signals that your body and brain are sending about when it’s time to “take a break, refresh, stop, slow down, pause, give space between something.”

“That space is where you allow yourself to be resilient,” she added.