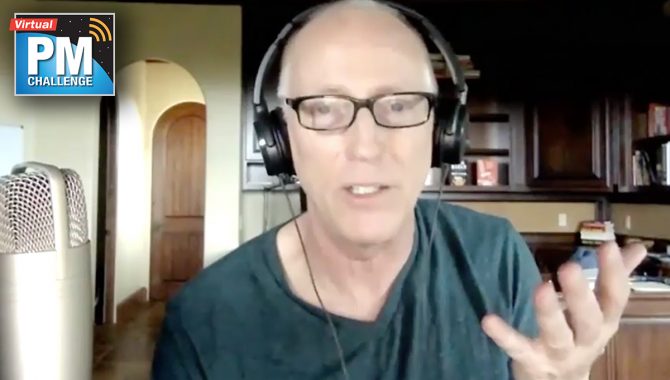 Catch up with key sessions of learning series during stay-at-home orders.

While much of the nation is under stay-at-home orders in response to the Coronavirus pandemic, APPEL Knowledge Services’ past episodes of the Virtual Project Management Challenge (VPMC) are available to view on demand, offering an impressive array of guests and discussion topics for NASA’s technical workforce.

Most recently, Scott Adams, who pens the globally syndicated comic strip Dilbert, was a guest, discussing success, imagination, and problem-solving. Adams holds an MBA from the University of California at Berkeley and has written several nonfiction books on success.

“My number one tip for success is to build what I call a ‘talent stack’ where you’re not the best in the world at anything. I’m certainly not. But I’ve developed a combination of skills that works so well together … that I have virtual superpowers in some areas just because of the combination of very ordinary skills,” Adams said.

Adams, who “always knew I wanted to be rich and famous,” became a student of success following his college graduation. He draws a key distinction between wanting to achieve something and deciding to do it. By deciding to do something, he said, a person establishes a mindset to overcome the inevitable obstacles to any achievement.

“We often think that we’re blocked by stuff because our imagination has created this picture of a wall, and we say, ‘Oh, I can’t get past that.’ But … you’re often wrong,” Adams said, adding that he frequently has people tell him that something can’t be done, only to find out within a week somebody already has done it. “This happens over and over again.”

One of the techniques Adams has used to succeed is to match his tasks to his mental states. For instance, because he is more creative in the morning, he reserves those hours to work on Dilbert or other projects that require creativity. Later in the day, he works on filing, organizing, and emails.

“So, for me, if my energy allows and I wake up at three or four in the morning, I’m really happy about that. … I found that if I match my state, my mental state and how I feel to the task, I’m way more productive,” Adams said, adding that many more people are able to match their tasks to their mental states now, during this time of mandatory telework.

Adams discussed many interesting topics in the VPMC, from the benefits of looking at the irrational world with an engineer’s logical point of view to the value of a lazy genius on the team, to when it makes sense to approach a project with narrow goals and when it makes sense to use a systems approach. To view the full VPMC, click here. 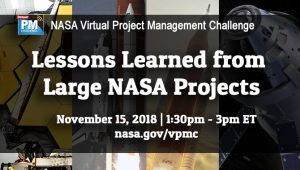 Another notable VPMC session to stream is Lessons Learned from Large NASA Projects, which features William H. Gerstenmaier, then Associate Administrator for the Human Exploration and Operations Mission Directorate and Thomas Zurbuchen, Associate Administrator for NASA’s Science Mission Directorate. The two leaders, with decades of experience on high-profile NASA projects, shared a list of six lessons to help project managers, from focusing on people, to realistically accounting for the time it takes for assembly, integration and testing.

“The beginning of a mission, especially, is full of innovation. … In that innovative activity, it’s absolutely important to have diversity of thinking, because the worst you could be doing is to groupthink and lock in. What that does, it takes options off the table. So often, the most important design first lands on the cemetery of ideas, because whatever constraint … was there that made it disappear, that constraint disappears and all of a sudden what’s out there is actually the best idea around. … If it’s not hard in the room to come to a consensus, you have not thought,” Zurbuchen said. To view the full VPMC, click here. 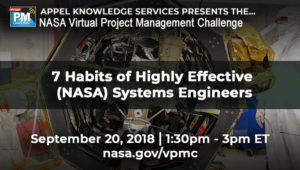 Systems engineering is a complex, interdisciplinary field that requires curiosity, self-confidence, and persistence to succeed. Systems engineers look across complex projects and programs, always considering the whole, while balancing the many components into an optimized design. Eight NASA systems engineers appear in the VPMC, with each discussing one of the seven habits and how it has applied to their own career.

This session is filled with practical advice on establishing effective communication, building team cohesion, staying mission focused, and remaining open-minded. “The reality is, to build a great culture, you’ve got to look at all the different factors that are motivating people on the team, and what it is they bring to the team,” said guest Julie Kramer White, Deputy Director of Engineering at Johnson Space Center. To view the full VPMC, click here. 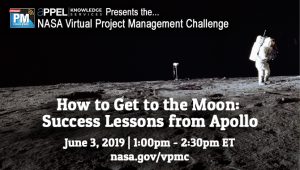 How to Get to the Moon: Success Lessons from Apollo

As the 50th anniversary of the first Apollo Moon landing approached, accomplished science journalist and space historian Andrew Chaikin, was a guest on the VPMC to discuss success lessons from Apollo. Chaikin presented a pyramid of success factors and a reverse pyramid of failure ingredients, which are available here. As Chaikin worked up the levels of the pyramid, he discussed: