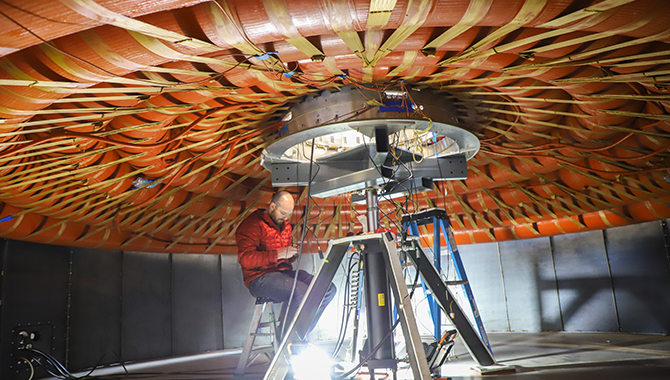 LOFTID pack and deployment testing started with a load test to verify that the heat shield will perform as expected in flight under real-life conditions.
Credit: NASA

New technology, set for major test in 2022, might hold one of the keys to a crewed mission to Mars.

As NASA focuses on a return to the Moon and then on to Mars, scientists and engineers are developing a bold new approach to solve one of the challenges of landing significantly larger payloads and missions on the red planet.

When the Curiosity Rover landed on the surface of Mars in 2012, it traveled through the thin Martian atmosphere with the largest aeroshell NASA had built to that point—4.5 m in diameter. Still, the rover and the science experiments it contained, with a mass of nearly a metric ton, pushed the limits of landing technology that was developed in the 1960s and 1970s for the Viking missions.

“With the Curiosity rover, we’ve basically landed as much mass as we possibly can at Mars, at least at that altitude. If we tried to land more, we would end up hitting the surface before we achieved all the sequence of events that we had to achieve in the timeline,” said Dr. Neil Cheatwood, Hypersonics Project Scientist, in a NASA video.

Any human-scale mission to Mars would have much greater mass—likely between 20 and 40 metric tons. To slow such a mission with conventional means would be impractical. Retro-propulsion could require that the spacecraft carry as much as 40 additional tons of fuel. To rely on parachutes, such a spacecraft would require multiple units, each larger than a football field, deployed at hypersonic speeds.

When a spacecraft enters a planet’s atmosphere, aerodynamic drag converts kinetic energy into heat, an efficient means to decelerate. However, because the atmosphere of Mars is so thin, the aerodynamic deceleration is much less than Earth, and that limits the mass of a spacecraft that NASA can land there.

After the Curiosity landing, a team at NASA began working on new approach—Hypersonic Inflatable Aerodynamic Decelerator (HIAD) technology. The HIAD is an inflatable aeroshell comprising ringed inflatable tubes of various diameters, that are bound together and covered with fabrics that are 10 to 15 times stronger than steel. 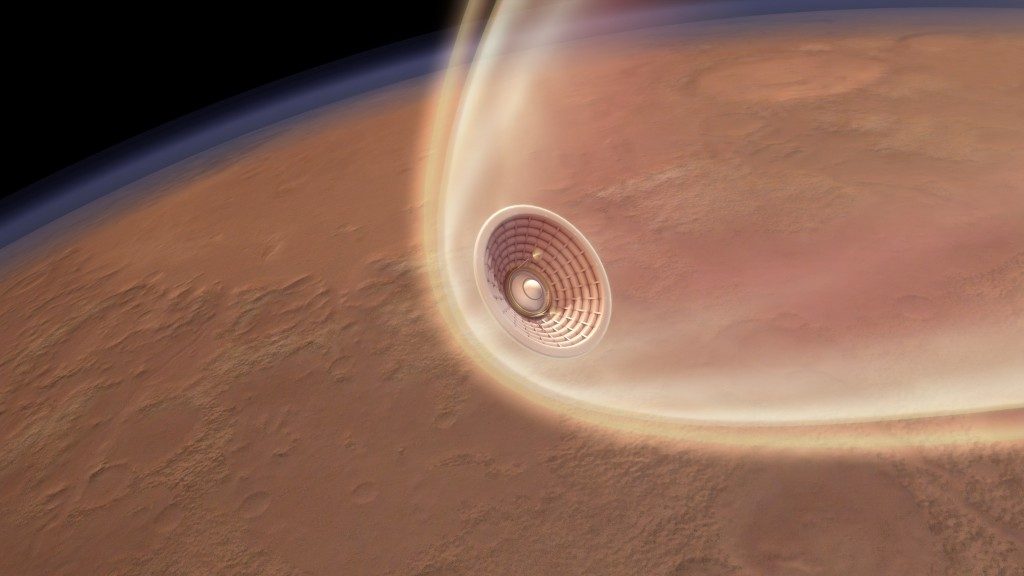 The HIAD Project is developing a truly crosscutting technology for atmospheric entry. This technology enhances, and potentially enables, a variety of proposed NASA missions to destinations with atmospheres (Mars, Venus, Titan, the gas giants).
Credit: NASA

The system is made possible by advancements in material science. While the inflatable rings resist the strong drag forces on the aeroshell, it is covered by a flexible thermal protection system (FTPS) that resists the extreme heat. The FTPS has an outer layer of ceramic fiber cloth that can withstand temperatures greater than 2,900 degrees Fahrenheit, a middle layer to inhibit heat transmission, and an inner layer that is impermeable to hot gasses.

Such a system can be incredibly strong. Engineers calculate a 15 m diameter aeroshell could be designed for a load of about 136 metric tons during entry, the equivalent of stacking 100 cars atop the fabric structure.

The advantage of an inflatable decelerator is that it can be folded into a small space within a spacecraft. At the appropriate time, the decelerator is released and the rings rapidly fill with gas. This results in a decelerator that can actually be larger than the diameter of the spacecraft, an option not available to engineers using a rigid decelerator.

“[An inflatable decelerator] is interesting because it actually can compact to a much, much smaller size and then inflate to much larger than anything you would see traditionally,” said Hillary Blakeley, Inflation System Lead, in a NASA video. “This helps us in the form of drag. For example, if we’re going to Mars, the atmosphere is very, very thin, and so we want to create more drag as we’re coming in. So, the larger heatshield enables that.”

NASA is performing tests on the components of a large-scale inflatable decelerator in advance of the Low-Earth Orbit Flight Test of an Inflatable Decelerator (LOFTID) slated for 2022 at Vandenberg Air Force Base. Teams are performing load testing, pack and deployment testing, and blow down testing of the nitrogen tanks and lines.

The decelerator that will be tested in LOFTID will be 6 m in diameter, making it the largest blunt body object to reenter Earth’s atmosphere. The Reentry Vehicle (RV) will launch aboard an Atlas V rocket. The RV will be stowed within the upper Centaur stage as a secondary payload for the launch. Once the primary payload is deployed, the Centaur will perform a deorbit burn and the RV will power up and be released.

LOFTID will validate the structural and thermal performance of the aeroshell in the Earth’s atmosphere. It will also demonstrate that it can withstand the extreme temperatures of reentry.