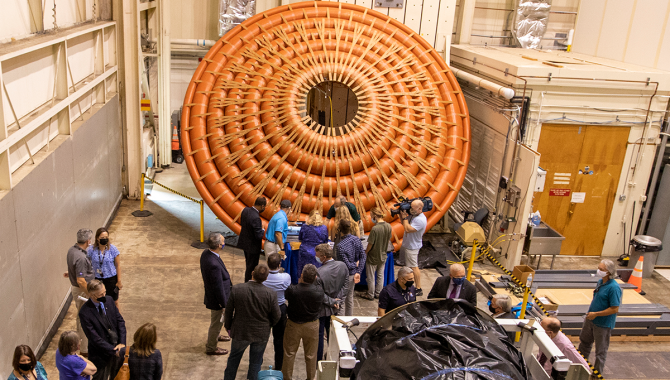 Technology could transform exploration of Mars, other planets.

Later this year, NASA plans to conduct the first hypersonic test of an advanced aeroshell with the potential to transform the exploration of Mars, other planets and moons, and even how large spacecrafts return to Earth. The mission could be launched into low-Earth orbit as soon as November 1 by the same United Launch Alliance Atlas V rocket that will carry NASA’s JPSS-2 polar-orbiting satellite into space.

Once the Centaur upper stage of the rocket has released the JPSS-2 into polar orbit, it will perform a maneuver that ensures the Centaur will not contaminate nor collide with JPSS-2, transfer to a lower orbit, and then reorient toward Earth. Next, a Hypersonic Inflatable Aerodynamic Decelerator (HIAD) nearly 20 feet in diameter will inflate. A small reentry vehicle attached to the shell will begin to rotate and separate from the upper stage. The mission is known as LOFTID—an acronym for Low-Earth Orbit Flight Test of an Inflatable Decelerator.

The development of an HIAD can be traced to efforts that began in the mid-2000s, but the concept of an inflatable decelerator is much older.

“The original concept actually comes from the [1950s and 1960s],” said Joe Del Corso, LOFTID Project Manager, speaking at a recent NASA press conference. “Unfortunately, during that time, they did not have the materials or structures.” It would be decades before engineers developed the advanced materials for an inflatable heat shield that could withstand the extreme forces of atmospheric reentry.

Years of development led to a successful proof-of-concept flight in 2009 with a smaller HIAD aboard a sounding rocket at NASA’s Wallops Flight Facility. Building on that foundation of success, NASA began a ground development effort to advance the technology. 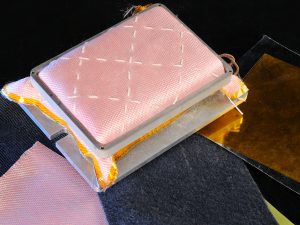 Layered samples of heat-resistant materials, called “coupons,” were tested in extreme heat to make sure they could withstand an atmospheric entry before they could be used on a HIAD.
Credit: NASA

“…It was a good proof of concept and it worked beautifully, but it wasn’t sufficiently mature at that point to do an orbital entry,” Del Corso said. “During that ground development effort, we essentially matured material systems, manufacturing processes. We matured our entire infrastructure, or how we deal with flexible systems as a whole and flexible aeroshell.”

The HIAD comprises a series of pressurized concentric rings, known as tori, stacked to form a cone and held together by straps. The tori are exceptionally strong, constructed from braided, synthetic fibers. While the inflatable rings resist the strong drag forces on the aeroshell, it is covered by a flexible thermal protection system (FTPS) that resists the extreme heat. The FTPS has an outer layer of ceramic fiber cloth that can withstand temperatures greater than 2,900 degrees Fahrenheit, a middle layer to inhibit heat transmission, and an inner layer that is impermeable to hot gasses.

“When people think of these [tori], they tend to think of those inner tubes you float around on a lazy river with. That’s not what these are.  These are closer … in kind to the wheels on your car. They’re very, very rigid,” Del Toro said, noting that the FTPS for the test flight has been specifically designed for the LOFTID mission.

“…We can tailor [the flexible thermal protection system] to different atmospheres, different environments, different thicknesses. So, for this particular mission, we understood what the entry was going to look like, so we’ve tailored it specifically for this entry. Think of it like a firefighter with a fire jacket going into a fire,” Del Toro explained.

LOFTID is equipped with cameras and sensors to gather data as the HIAD slows the re-entry vehicle from approximately Mach 25 to Mach 0.7, at which time the mission will conclude, and parachutes will be deployed. Data will flow to the team every 20 seconds during the descent, which will extend approximately 30 minutes. The data will also be logged on two data recorders aboard the spacecraft, one of which will be ejected before LOFTID splashes down off the east coast of Hawaii.

“That system allows us to capture all of the data and eject it from the vehicle as a backup in case we cannot recover the vehicle itself. So, that gives us extra assurance that we will retrieve the fully recorded data,” said John DiNonno, LOFTID chief engineer, speaking at the same NASA press conference.

The advantage of HIAD is that it can be folded into a small space within a spacecraft. At the appropriate time, the decelerator is released, and the rings rapidly fill with gas. This results in a decelerator that can be much larger than the typically 4.5-to 5-meter diameter of a launch vehicle and can therefore land much heavier loads and deliver them to higher elevations on a planet.

“This technology can ultimately enable new missions for us to Mars, Venus, even the largest moon of Saturn, Titan, is a possibility because of the dense atmosphere there. And it can be used for payload returns to Earth as well,” said Trudy Kortes, Director of Technology Demonstrations for NASA’s Space Technology Mission Directorate. “LOFTID is cutting edge technology. It’s a first of its kind…. So, really our main objective here is to demonstrate this technology through the hypersonic regime to obtain flight data and really learn how this technology performs in that environment and use it for future needs.”