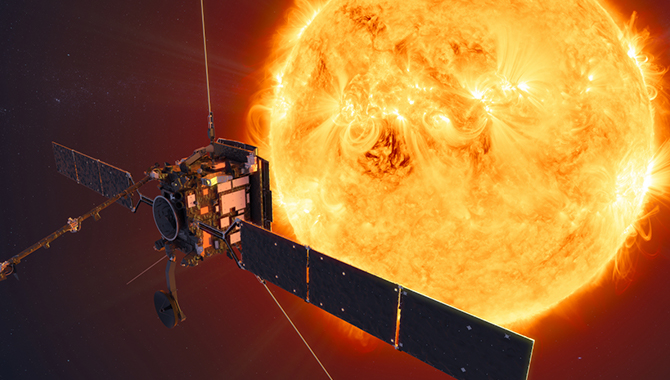 The Sun has yielded its secrets slowly to science. Once worshiped as a god pulled across the sky on a chariot by fiery horses, the unfolding scientific truth is seemingly even more fantastic—a star more than 100 times larger than Earth, accounting for 99.86 percent of the solar system’s mass, possessing a core temperature of more than 27 million degrees Fahrenheit.

Far from being a mere disk in the sky, the Sun emits a stream of particles in all directions, some traveling nearly 500 miles per hour through the solar system. Many mysteries about the Sun remain, including how and why these particles accelerate to such speeds.

The European Space Agency (ESA) recently completed testing on a spacecraft designed to examine the relationship between the Sun’s magnetic field, plasma at the solar surface, and the solar wind. This spacecraft, known as the Solar Orbiter, is scheduled to arrive at Cape Canaveral, Florida aboard an Antonov cargo plane at the end of October.

The Solar Orbiter will be placed aboard an Atlas V 411 rocket supplied by NASA, with a planned launch date in February 2020. The spacecraft will use gravity assists from both Earth and Venus over the next 3.5 years to reach its final elliptical orbit, the perihelion of which is nearer to the Sun than the orbit of Mercury. The Solar Orbiter will use subsequent encounters with Venus for gravity assists that will change the inclination of its orbit and enable it to capture the first images the Sun’s polar regions. 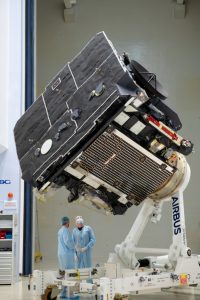 ESA’s Solar Orbiter at IABG in Ottobrunn, Germany, before it starts its journey to Cape Canaveral in Florida, USA.
Credit: ESA – S. Corvaja

“Solar Orbiter is a fantastic mission. It will help us understand how the Sun, essential to almost all life on Earth, forms the heliosphere and the origin of space weather, which can have an enormous influence on our modern civilization,” said Professor Alvaro Giménez Cañete, ESA Director of Science and Robotic Exploration, in a press release.

Airbus Defence and Space Ltd built the spacecraft, which is about 8.2 ft by 9.8 ft, with a launch mass of approximately 4,000 pounds. Once in space, the team will unfold two massive solar arrays that will generate electricity. The arrays will rotate when Solar Orbiter is closest to the Sun, protecting the panels from the intense heat that full direct exposure would cause.

The in situ instruments include a Magnetometer to measure the heliospheric magnetic field, an Energetic Particle Detector to measure the composition, timing and distribution of suprathermal and energetic particles, a Solar Wind Plasma Analyser and a Radio and Plasma Waves experiment to measure magnetic and electric fields in the solar wind.

The remote-sensing instruments include an Extreme Ultraviolet Imager to provide image sequences linking the solar surface and outer corona,  a Coronagraph that will image the corona to reveal its structure and dynamics, a Polarimetric and Helioseismic Imager, a Heliospheric Imager, Spectral Imaging of the Coronal Environment and an X-ray Spectrometer/Telescope.

Solar Orbiter will simultaneously be exposed to extreme cold and heat at the perihelion of its orbit around the Sun. The heat shield was designed to protect the spacecraft from temperatures exceeding 930 degrees Fahrenheit while the portion away from the Sun will be at temperatures of nearly minus 300 degrees.

The heat shield comprises an aluminum honeycomb about 2 in. thick, covered with 30 layers of insulation and attached to the spacecraft with thin fins of titanium that greatly reduce the heat transfer from the shield to the spacecraft’s structural elements.

Solar Orbiter’s seven-year primary mission overlaps NASA’s Parker Solar Probe, which is making a series of 24 elliptical orbits through the Sun’s corona. At certain points in the missions, this will enable Solar Orbiter’s researchers to coordinate their data with that of the Parker Solar Probe team, to provide multiple viewpoints of the Sun’s corona and the corresponding solar wind.

“Solar Orbiter is set for answering some of the biggest scientific questions about our star, and its data will help us to better protect our planet from the global challenges of space weather,” said Günther Hasinger, ESA Director of Science, in a press release.