Back to Top
Home/INSIGHT/DART Takes Aim at Asteroid Moonlet 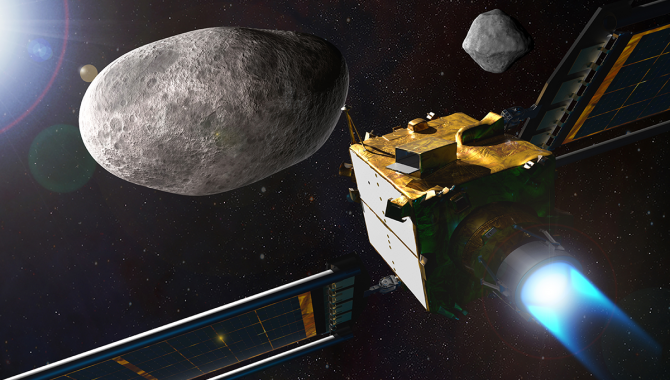 In the fall of 2022, the DART spacecraft will collide head-on with the smaller asteroid in the Didymos system in the first space test of the kinetic impactor method for deflecting an asteroid.
Credit: NASA/Johns Hopkins APL

Mission will be first space test of kinetic impactor method.

Later this year or early in 2022, NASA is scheduled to launch a mission to Didymos, a binary asteroid system on an elliptical orbit around the Sun, sometimes passing within about 4.5 million miles of Earth, other times as distant as beyond the orbit of Mars. The mission will be the first space test of the kinetic impactor method for deflecting an asteroid.

The mission is known as DART, an acronym for Double Asteroid Redirection Test. It follows the success of the OSIRIS-REx mission, which for months observed the asteroid Bennu—the smallest object ever orbited by a spacecraft—collected a surface sample and is now returning to Earth to deliver that sample to the Utah desert in 2023 for further study.

“Closer study of asteroids tells us what we need to know about them to better discover, characterize, and mitigate any potential impact hazards to Earth. Planetary defense, as I like to say, is applied planetary science,” said Lindley Johnson, planetary defense officer at NASA’s Planetary Defense Coordination Office at NASA Headquarters, speaking at a recent NASA press conference about OSIRIS-REx.

The DART spacecraft, being developed by the Johns Hopkins University Applied Physics Laboratory, is about 5.9 feet wide, 6.2 feet long, and 8.5 feet high. It is scheduled to launch from Vandenberg Air Force Base in California atop a SpaceX Falcon 9 rocket in a launch window that opens on November 24, 2021 and closes on February 15, 2022. 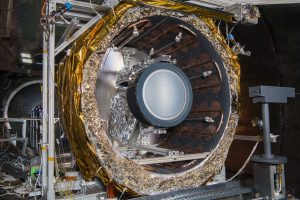 The NEXT-C flight thruster is mounted within a thermal shroud in one of NASA Glenn’s vacuum chambers. The thermal shroud subjects the thruster to the extreme thermal environments it has been designed to withstand.
Credits: NASA/Bridget Caswell

In space, a pair of Roll-Out Solar Arrays, each 8.6 meters long, will deploy on either side to power the spacecraft. The arrays include a technology demonstration of advanced solar cells that employ reflectors to produce three times the energy of conventional solar cells. Propulsion will be provided by NASA’s Evolutionary Xenon Thruster–Commercial (NEXT–C), a solar-powered, gridded-ion thruster known for its fuel efficiency, durability, and suitability for smaller spacecrafts.

Didymos is about 780 meters in diameter, completing an elliptical orbit around the Sun approximately every 2.1 Earth years. The asteroid is orbited every 11.92 hours by a much smaller body, a “moonlet” known as Dimorphos. At approximately 160 meters in diameter, Dimorphos is roughly comparable to the Houston Astrodome or the Great Pyramid of Giza.

Dimorphos is DART’s target. Although Didymos and Dimorphos don’t pose a threat to Earth, the moonlet’s size makes it a good analog for the most prevalent asteroids that could create significant damage if they struck the Earth. The fact that Dimorphos orbits Didymos every 11.92 hours means that any small change in its orbit caused by the impact can be effectively observed and quantified much faster than a similar sized asteroid orbiting the Sun over the course of years.

The spacecraft’s lone instrument is called DRACO, and acronym for the Didymos Reconnaissance and Asteroid Camera for Optical navigation. DART is planned to reach the Didymos system in September 2022. DRACO will take high-resolution images of the system to help the team discern the size and shape of the two asteroids. DRACO, working with DART’s navigation system, will guide the spacecraft into a near head-on collision with Dimorphos at more than 15,000 miles per hour.

“The spacecraft will impact itself into the moon Dimorphos to redirect its orbit around the primary Didymos to test the effectiveness of this kinetic impactor technique, should we ever need to redirect a truly hazardous asteroid,” Johnson said. 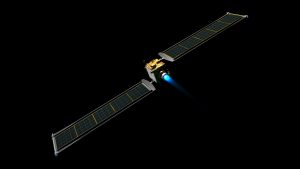 This illustration of the DART spacecraft shows the Roll Out Solar Arrays (ROSA) extended. Each of the two ROSA arrays is 8.6 meters by 2.3 meters.
Credit: NASA/Johns Hopkins APL

This impact is planned for late September or early October 2022, when the Didymos system is about 7 million miles from Earth. The final images DRACO takes before impact will provide important details of the asteroid’s surface geology that will help the team better understand the effects of the impact.

Several days before that collision, DART will release a small CubeSat known as LICIACube, developed by the Agenzia Spaziale Italiana. LICIACube will trail behind DART, flying past Dimorphos about three minutes after impact, imaging any crater or impact plume as well as the opposite side, which will provide clues to the moonlet’s structure and composition.

Because the two asteroids eclipse each other during orbit, altering the system’s light curves, scientist will also be able to observe the effects of impact using U.S. and international ground-based radar and optical telescopes, including those at the Kitt Peak National Observatory in Tucson, Arizona, where Didymos was discovered on April 11, 1996. These observations will indicate how much the impact changed the orbital period of Dimorphos. Expectations are about 1 percent, which would represent a significant change for a similar-sized object orbiting the Sun.

Further information will be gained with a mission being developed by the European Space Agency arrives at Didymos and Dimorphos in early 2027. The mission will observe the asteroid and moonlet, better quantifying the surface and composition of Dimorphos, the nature and effect of DART’s impact, and the characteristics of the crater left behind. This data will aid researchers as they take the lessons learned from DART and apply them to other asteroids.