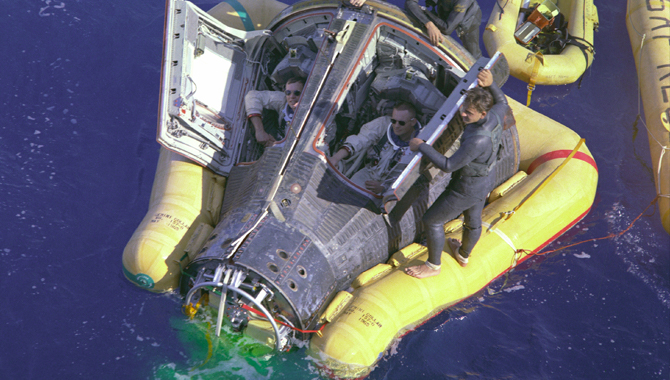 Astronauts Neil Armstrong and David R. Scott sit with their spacecraft hatches open while awaiting the arrival of the recovery ship, the U.S.S. Leonard F. Mason, after the completion of their Gemini VIII mission.
Credit: NASA

Two astronauts on their first spaceflight make first docking maneuver in orbit, save their vehicle from violent roll.

Although Gemini VIII was in orbit for just 10 hours and 41 minutes of a planned three-day mission, NASA learned many valuable lessons from it, including about the spectacular abilities of Command Pilot Neil A. Armstrong and Pilot David R. Scott, two astronauts who would go on to play key roles in later missions to the Moon.

When Gemini VIII launched from LC-19 at Cape Kennedy on March 16, 1966 — 54 years ago this month — Armstrong and Scott were both on their first spaceflight, facing a full list of ambitious mission objectives, including the first ever docking of two vehicles in orbit. Their target, the modified upper stage of an Atlas-Agena rocket, launched earlier that morning.

“We had a docking simulator which was quite, quite [realistic]. We felt it was a good representation of what we could expect, and indeed it turned out to be quite similar to what we encountered in flight,” Armstrong recalled in an oral history collected by historians and authors Stephen E. Ambrose and Douglas Brinkley. 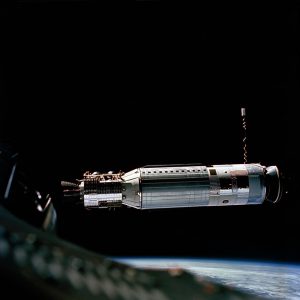 Closer view of the Agena Target Docking vehicle seen from the Gemini-VIII spacecraft during rendezvous in space.
Credit: NASA

A successful, repeatable docking maneuver was essential to NASA’s plans to land humans on the Moon by the end of the decade. In 1962, NASA selected the option of lunar rendezvous to reach the Moon, which called for multiple rendezvous and docking maneuvers. A similar attempt in the fall of 1965 had been cancelled after the Agena exploded while firing into orbit. This time, the Agena performed flawlessly and Gemini VIII docked successfully with it about six and a half hours after launch.

On the dark side of the Earth, with few visual cues, it was Scott who first noticed that the joined vehicles had begun to yaw and tumble about 27 minutes later. Because the Gemini’s Orbit Attitude and Maneuver System (OAMS) was not being engaged, the astronauts focused their attention on correcting a malfunction with the Agena.

“Neither of us thought that Gemini might be the culprit, because you could easily hear the Gemini thrusters whenever they fired. They were out right in the nose, in the back. Every time one fired, it was just like a popgun, ‘crack, crack, crack, crack.’ And we weren’t hearing anything, so we didn’t think it was our spacecraft,” Armstrong recalled.

While Scott sent control signals to the Agena, Armstrong brought the joined vehicles under control, only to have them begin to yaw and tumble again. The rate of the movement continued to increase violently. Armstrong, knowing that he and Scott would soon lose consciousness, made the decision to separate from the Agena. Scott had the extreme composure to transfer control of the Agena back to mission control before the undocking maneuver. This enabled mission control to retrieve data from the Agena.

To the astronauts’ surprise, once they had separated from the Agena, the rate of Gemini VIII’s roll, pitch and yaw actually increased—eventually exceeding a staggering one rotation per second.  Although Armstrong had fired thrusters to gain distance of about five feet from the Agena, which was still rolling and tumbling, the astronauts had no way of knowing if the two vehicles would collide.

“…Once we [separated] and found out we couldn’t … regain control in a normal manner, we recognized that it was a failure in our craft, not [in] the Agena. The reason we didn’t hear it is, you only hear [the thruster] when it fires; you don’t hear it when it’s running steadily. I didn’t … know that at the time, but I figured it out,” Armstrong said.

On their first spaceflight, out of contact with mission control because of their location, with seconds to act before losing consciousness, Armstrong and Scott turned off circuit breakers to the OAMS and engaged the Reentry Control System (RCS) to stabilize the spacecraft. Mission rules dictated that a firing of the RCS meant that Gemini VIII would have to return to Earth immediately. 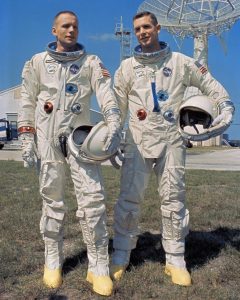 “It was a great disappointment to us, to have to cut that flight short,” Armstrong recalled of the mission that was to have included an EVA by Scott to test a backpack holding a supply of oxygen and a freon propellent system. “At some point you just have to make the decision that I can’t take the risk of pursuing my goal further, because I have to go back to the foundation instincts, which is save your craft, save the folks, get back home, and be disappointed that you had to leave some of your goals behind.”

The U.S. Navy immediately dispatched the U.S.S. Leonard F. Mason to an alternative landing site in the western Pacific Ocean, west of Okinawa, Japan. The U.S. Air Force sent a pararescue unit to meet the capsule and attach a large floatation device.

“Being an old navy guy, I much preferred coming down in the water to coming down in Red China at the time,” Armstrong recalled. “We heard the sound of the propeller airplane—I think it was a C-54—as we were coming down in the chute. We assumed it was friendly.” Scott would later joke that he and Armstrong held the record for landing farthest off target.

An investigation found that roll thruster number 8 had been stuck in the on position, even when it wasn’t being engaged. One suspected cause for this was a possible short circuit created by the discharge of static electricity.

Although Gemini VIII was cut short, the mission proved that the docking mechanism NASA had developed worked well in orbit and was able to undock in less than ideal conditions. It also proved the exceptional abilities of Armstrong and Scott, who performed a series of physically demanding actions under the worst of circumstances to save the mission. It would be the only Gemini mission in which both crew members later walked on the Moon. The two men remained friends, always making it a point to share a private phone call on March 16.