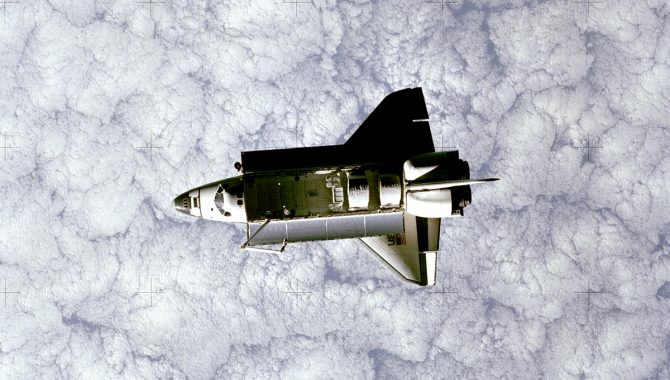 Space Shuttle Challenger, orbiting the Earth, as seen from a camera mounted on the first Shuttle Pallet Satellite.
Credit: NASA

On June 18, 1983—37 years ago this month—the Space Shuttle Challenger lifted off in the early morning light from Launch Complex 39A at Kennedy Space Center on what became a 2.53-million-mile journey in which a crew of five orbited the Earth 97 times, deployed two communications satellites and conducted many science experiments.

“Well, when you’re a rookie going on a test flight like this, you want to go with an old pro, and John was our old pro,” Crippen recalled of STS-1, in an oral history. “He had four previous flights, including going to the Moon, and John is not only an excellent pilot, he’s an excellent engineer. I learned early on that if John was worried about something, I should be worried about it as well.”

NASA Astronaut Sally K. Ride became the first American woman in space on STS-7 as a Mission Specialist. Ride, a member of the Class of 1978, was an expert operating the Shuttle’s Remote Manipulator System (RMS). The RMS would figure prominently in achieving the mission’s objectives, which included deploying and retrieving the first Shuttle Pallet Satellite (SPAS-01), a satellite bus carrying 10 experiments. It was also the first mission to include five astronauts.

On the morning of the launch, Ride recalled in an oral history, that although the shuttle simulators had prepared the crew well for the shaking, sound, and sights they would experience in the cockpit on liftoff, “the actual experience of a launch is not even close to the simulators!” 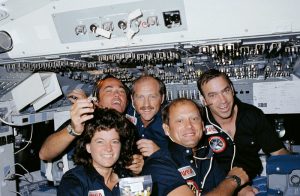 “The simulators just don’t capture the psychological and emotional feeling that come along with the actual launch. Those are fueled by the realization that you’re not in the simulator, you’re sitting on top of tons of rocket fuel and it’s basically exploding underneath you. It’s an emotionally and psychologically overwhelming experience. Very exhilarating. Exhilarating, terrifying, and overwhelming all at the same time,” Ride said.

As a first-time commander, Crippen used the insight he had gained from Young on STS-1 to set the tone for the mission, making sure the crew—who were “as sharp as they come,” he recalled—knew their individual responsibilities and were focused on the mission objectives.

The deployment and capture of SPAS-01 was a key objective of the mission because it demonstrated the Shuttle’s capabilities to work with another orbiting body close to the Shuttle. Ride used the Shuttle RMS to remove SPAS-01 from the cargo bay and release it into orbit.

“The act of releasing a satellite and then backing the arm away felt very much like it did in the simulators. But the act of going up and capturing a satellite was a little more scary. I remember thinking, ‘Oh, my gosh. This is real metal that will hit real metal if I miss. What if we don’t capture this satellite? It was easy in the simulators, but is it going to be as easy in orbit?’ It turned out that it was, but the experience was different because it was real,” Ride recalled.

Crippen and Pilot Frederick H. Hauck both flew Challenger away from SPAS-01 and rendezvoused with it. They learned that when they tried to slow Challenger as it approached SPAS-01, the digital autopilot system would sometimes fire the attitude control thrusters, drawing the Shuttle closer than they wanted.

“So, we ended up learning a few things about how the autopilot worked that we corrected subsequently and makes it very nice for rendezvous today, which is extremely important on things like working with the [International Space] Station. But it all really worked very well,” Crippen said. 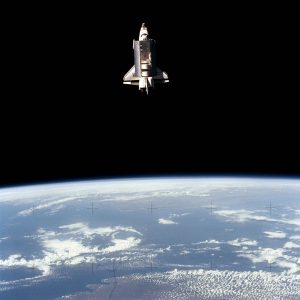 STS-7 was the first Shuttle mission to carry five astronauts, and all five were involved in the deployment and capture of SPAS-01, Crippen said. Mission Specialist John Fabian, also an expert with the RMS, captured the SPAS-01. Crippen also gave Mission Specialist Dr. Norman E. Thagard an opportunity to capture the SPAS-01. Thagard, a licensed physician, was a late addition to the crew, conducting a series of experiments into space adaptation syndrome, also known as space sickness.

Utilizing Thagard with SPAS-01 fit into Crippen’s advice to the crew before the mission: “Enjoy it. Enjoy it. You never know whether you’re going to get a second flight …, so take advantage of when you go up, to really savor it.”

More than a decade after his retirement from NASA, Crippen said he considered flying the Space Shuttle—and especially STS-1—to be a test pilot’s dream come true. “…To get a chance to take a winged vehicle into orbit, use solid rocket motors that have never been used previously, and then bring it back down to a landing on a runway—which is much more elegant than dropping into the ocean. It’s just hard to find something to beat that, and so it’s something I’d dreamed about as a kid and had a chance to do.”