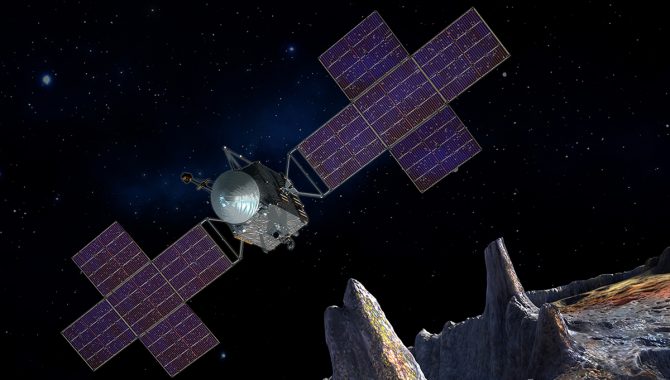 This artist's-concept illustration depicts the spacecraft of NASA's Psyche mission near the mission's target, the metal asteroid Psyche. The artwork was created in May 2017 to show the five-panel solar arrays planned for the spacecraft.
Credit: NASA/JPL-Caltech

Psyche spacecraft seeks to identify if object in main belt is the core of a past planet.

On March 17, 1852, Italian astronomer Annibale de Gasparis peered through a telescope in Naples, Italy, through more than a hundred million miles of space into the vast asteroid belt between Mars and Jupiter. Astronomers of the time were making impressive discoveries in this main belt, identifying the largest asteroids there. On this Wednesday evening, de Gasparis discovered a glowing object that still intrigues scientists today. He named the asteroid Psyche.

Psyche was the 16th asteroid identified in the main belt and is now known as 16 Psyche. It is about 140 miles in diameter, orbiting the sun in approximately five Earth years, but making a full rotation on its axis in just 4.196 hours. Based on observations indicating its mass and radar albedo, scientists believe Psyche is largely metal, primarily iron and nickel. It appears to have a rough surface marked by two massive depressions at the south, each at least 30 miles across. 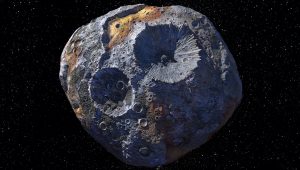 This artist’s concept of 16 Psyche, includes the rugged surface and massive craters of the iron and nickel asteroid.
Credit: NASA/JPL-Caltech/ASU

To answer some of the key questions about Psyche, its origins, and what that can reveal about the formation of planets, NASA and a team of researchers at Arizona State University (ASU) have partnered on a mission through NASA’s Discovery Program to explore 16 Psyche. A spacecraft, also named Psyche, is scheduled to launch in August 2022—170 years after the asteroid’s discovery— on a three-and-a-half-year journey, via a gravity assist at Mars.

“We think that Psyche is the core of a small, early formed planet that was bombarded in the early solar system and had its rocky exterior knocked off so that only its metal core remains showing today. Computer models of planetary formation indicate that this is rare. And, indeed, Psyche is the only [such] large round metal object in our solar system. So, it’s not just unique, it’s improbable,” said Principal Investigator Lindy Elkins-Tanton, testifying before the House Committee on Science, Space and Technology in Washington, D.C., on July 18, 2017.

The Psyche spacecraft will arrive at the hulking metal asteroid in 2026, carrying a suite of sophisticated instruments to thoroughly investigate 16 Psyche’s properties. A Multispectral Imager will create high-resolution images that can differentiate between Psyche’s metallic and silicate elements. The team for this instrument is based at Arizona State University.

A Gamma Ray and Neutron Spectrometer, mounted on a boom to isolate it from radiation immediately around the spacecraft, will map Psyche’s elements. The team for this instrument is based at the Applied Physics Laboratory at Johns Hopkins University.

The mission will measure if the asteroid has a magnetic field and that field’s properties with a Magnetometer using twin magnetic field sensors, also mounted on a boom. The team for the instrument is based at Massachusetts Institute of Technology and Technical University of Denmark (DTU). 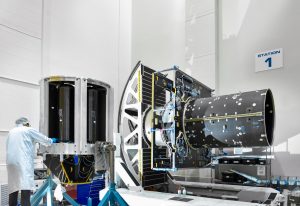 The main body of NASA’s Psyche spacecraft, called the Solar Electric Propulsion (SEP) Chassis, is in a clean room at Maxar Technologies in Palo Alto, California, where a technician prepares to integrate part of the electric propulsion system onto the chassis.
Credit: NASA/JPL

The team will employ an X-band radio telecommunications system, which will provide precise measurements of Psyche’s gravity field. This, coupled with topographic images, will give the team insight into 16 Psyche’s internal structure. The X-band team is based at Massachusetts Institute of Technology and the Jet Propulsion Laboratory.

The spacecraft will gather data in a series of 1,256 planned orbits, grouped into four progressively closer distances. The first 41 orbits, over a span of 56 days, will characterize 16 Psyche. The spacecraft will then move closer for 169 orbits to record the asteroid’s topography. The next 362 orbits, over 100 days, will focus on gravity.  Finally, the team will focus on elemental composition and mapping during the last 684 orbits.

Thanks to a team at NASA’s Jet Propulsion Laboratory, data from the spacecraft will be encoded in photons and sent to Earth via a new laser communication system. This will greatly increase the amount of data that can be transferred in a given time. That rich data stream will begin decades of research, yielding better understanding of 16 Psyche and the likelihood that it is a core from a destroyed planet.

If the data revels that 16 Psyche is a core, “we’ll learn what the earliest cores were like, before they merged together into bigger and bigger bodies… What were those very first cores like? They are the building blocks of today’s cores,” Elkins-Tanton said.

This data from 16 Psyche could also lead to a better understanding of Earth’s core, according to Dr. Tim McCoy, Psyche Mission Co-Investigator, and Curator-in-Charge of the U.S. National Meteorite Collection at the Smithsonian National Museum of Natural History.

“We’ve known for two centuries that [Earth’s] core was made of metal, but we haven’t been able to explore. We can’t drill a hole that deep. We can’t explore with any kind of submersible in the oceans. What we’ve been looking for, for years, is a metallic asteroid, something that is very dense. … Psyche is our way to explore our own planet,” McCoy said in NASA video.

“…Graduate students 10 years, 20 years, 30 years from now will learn things about this asteroid that we can’t even imagine today,” McCoy said.