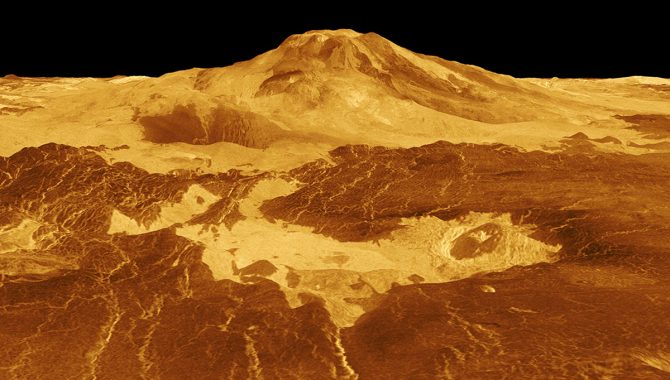 The surface of Venus is marked by hundreds of large volcanoes such as Maat Mons, shown here in this computer-generated three-dimensional image.
Credit: NASA

The closest planet to Earth has proven elusive to understand.

For as long as humans have gazed into the night sky with wonder, Venus has been a puzzle. As the second brightest object in the night sky, after the Moon, it is easily discovered by any small child who looks up. Ancient civilizations tracked the movements of Venus and kept detailed records of its location in the sky.

And yet, Venus confounded them. Many observers believed they were looking at two separate bodies: A morning star that became visible a few hours before sunrise, and an evening star that became visible minutes after sunset. Greek astronomers during the Hellenistic period, circa 300 B.C., were likely the first to realize that the two stars were actually a single body. But it would be more than 1,800 years before astronomers became increasingly certain that the single body was actually a planet.

In the fall of 1610, Galileo Galilei trained one of the first telescopes in the world—one he had designed and built—toward Venus. Although the telescope had modest powers of magnification, it was strong enough to reveal that Venus, when viewed from Earth, appears in phases similar to those of the Moon, validating the predictions of Nicolaus Copernicus and helping confirm the heliocentric nature of planetary motion.

Over the centuries to follow, astronomers would find that Venus yields its secrets slowly. The picture that emerged was of a planet so similar in size to Earth that it became known as Earth’s “sister planet.” Yet, even as astronomers developed more powerful telescopes, they discovered relatively little about Venus, its surface obscured by persistent, thick clouds. 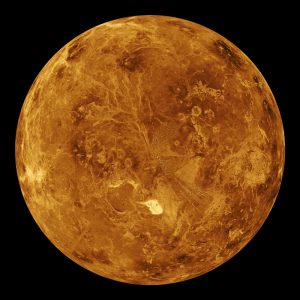 The northern hemisphere of Venus, marked by massive volcanoes and lava flows is shown here in a computer simulated global view.
Credit: NASA/JPL

At the dawn of the space age, Venus was the first planetary target of both the United States and the Soviet Union space programs. NASA’s Mariner 2 was the first spacecraft to make a successful flyby of Venus, returning data that began to reveal the surprisingly harsh nature of the planet, with its slow retrograde rotation, staggeringly hot surface temperatures, and thick carbon dioxide atmosphere.

In the 60 years that followed, about 30 missions have targeted Venus, revealing a planet with surface temperatures of about 900 degrees Fahrenheit, skies filled with thick, swirling clouds of sulfuric acid whipped by upper-level winds far exceeding 200 miles per hour, and intense pressure that renders the carbon dioxide in the atmosphere at the planet’s surface as a supercritical fluid.

When NASA’s Magellan mission mapped the surface of Venus from 1990 to 1994 using synthetic aperture radar, it revealed a landscape untouched by erosion, dominated by massive volcanoes—some more than 60 miles wide and as high as Himalayan mountain peaks—surrounded by ancient lava flows that extend for hundreds of miles. This growing clarity about the hellish conditions on Venus left scientists with a simple question that persists today. Why?

“What’s so puzzling about [Venus] is that we think that if we looked at … Venus, Earth, and Mars three billion years ago, they would be roughly the same. Modest type atmosphere,” said Dr. Thomas Zurbuchen, NASA’s Associate Administrator for the Science Mission Directorate, speaking in a NASA video.  “The planet Venus went a really horrible track … of trapping [heat]. And frankly, we don’t know today why that is. We know the greenhouse effect is a really important part.”

NASA is developing two new missions to launch at the end of the decade and examine Venus in far greater detail than ever before—DAVINCI+ and VERITAS.

DAVINCI+, an acronym for Deep Atmosphere Venus Investigation of Noble gases, Chemistry, and Imaging, will send a spherical probe from the cloud tops to the surface, measuring the chemical elements of the atmosphere and then taking high-resolution 3-D images of the surface on a human scale.

“We’re going to go back in time to understand a world that’s been a lost horizon,” said Dr. James Garvin, Goddard Space Flight Center, speaking at a live event announcing the Venus missions. Garvin is the mission’s principal investigator, who described Venus as the mystery exoplanet next door. “Our spacecraft will unravel the history of the key chemical constituents in the atmosphere, which are like the fingerprints of the processes.”

“DAVINCI+ is like a flying rover chemistry lab, that descends through the atmosphere from the cloud tops to the surface, making measurements by ingesting the atmosphere and measuring it. Venus is telling us something because it has this big atmosphere. We’re going to go there—back to that lost horizon—with our mission to connect those dots…,” Garvin said. 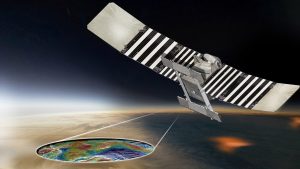 VERITAS, an acronym for Venus Emissivity, Radio Science, InSAR, Topography, And Spectroscopy, will employ synthetic aperture radar to create an extensive topographical record of the surface of Venus, looking specifically for evidence of active plate tectonics or volcanoes.

“We will be … using special instruments to see through the clouds and revealing the geologic history. We’re looking for processes that are active today and really understanding how the interior of Venus—from its core to its surface geology to the volcanoes that helped create the atmosphere—how they all interact and help build a habitable planet in the past and where it went wrong to become this supremely uninhabitable planet today,” Smrekar said.

The missions are funded through NASA’s Discovery Program, which focus on smaller planetary missions that complement NASA’s larger exploration missions while providing important answers to key questions about our solar system.

“It is astounding how little we know about Venus, but the combined results of these missions will tell us about the planet from the clouds in its sky through the volcanoes on its surface all the way down to its very core,” said Tom Wagner, NASA’s Discovery Program scientist, in a NASA press release. “It will be as if we have rediscovered the planet.”