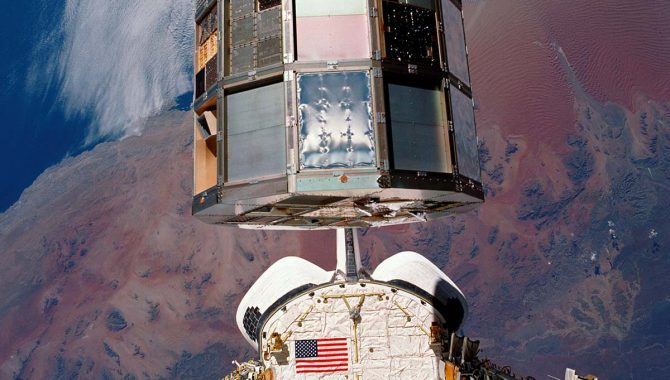 On January 12, 1990, Mission Specialist Bonnie J. Dunbar and the crew of STS-32 peered from the windows of the Space Shuttle Columbia into the darkness of space, eagerly searching for bicycle reflectors.

The reflectors were attached to NASA’s Long Duration Exposure Facility (LDEF), a 12-sided polygon-shaped satellite 30 feet long, 14 feet wide, and weighing about 8,000 pounds. It was launched in 1984 aboard the Space Shuttle Challenger during mission STS-41-C to gather data about how high-performance spacecraft materials withstand long-term exposure to solar radiation, space debris, and the extreme temperatures of Low Earth Orbit.

The astronauts would later learn that the bicycle reflectors were so difficult to spot because many of them were destroyed, eroded by long-term exposure to atomic oxygen. The LDEF was originally scheduled to orbit Earth for about 18 months. But changes to the shuttle program following the Challenger accident meant LDEF was in space for much longer—nearly 6 years. Scientists had calculated that there was about a month until LDEF’s orbit decayed to the point that a shuttle mission could no longer retrieve it. 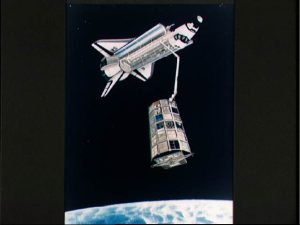 “… They’d put these bicycle reflectors on it to help with retrieval, and I had trained that way,” recalled Dunbar in an oral history. “And remember, in those days we didn’t have GPS [Global Positioning System]; we didn’t have laser range finders. We were doing triangulation with cameras… So, I was trying to look out the window for these reflectors, and I couldn’t see them.”

But Dunbar knew LDEF was near because NASA was closely monitoring its decaying orbit and had timed Columbia’s launch for a ready rendezvous.  Soon, Dunbar spotted it.

“…Houston, we have a tallyho on LDEF, and it looks even better than the [Shuttle Mission Simulator] SMS visuals,” Dunbar reported. Commander Daniel C. Brandenstein and Pilot James D. Wetherbee soon began to perform a new shuttle rendezvous maneuver developed specifically for this flight— the J-bar.

With the J-bar rendezvous, Brandenstein and Wetherbee flew Columbia over the top of LDEF, came down from above, and then rotated the Shuttle to align with the satellite. With this maneuver, the shuttle served as a wake shield, deflecting atomic oxygen flow away from LDEF as Dunbar captured and maneuvered it with Columbia’s Remote Manipulator System.

“The Shuttle had a mode where you can fly up to something but not shoot plumes at it, but it had never been done before either,” Brandenstein recalled, in an oral history. “We agreed that we would try to rendezvous that way and make that approach. If we weren’t being successful, we would back out of it and then we’d risk getting a little more contamination on it. But … through training and the fact that the Shuttle flies very well, we were able to make the rendezvous and fly right up to it and get stopped, and [Dunbar] grabbed it using that mode.”

The satellite was a tight fit, filling more than half of the length and nearly all the interior diameter. If the crew had been unable to secure it at four latch points, properly situating the satellite’s keel, the contingency plan was to take LDEF to a higher orbit and release it, making it even more crucial to capture the photographic data.

“It was pretty well beat up,” Brandenstein recalled. “Some of the experiments were essentially lost, but then they gained some other things that they hadn’t planned on getting because it had been up there so long. So, … that one ended up working out all right.”

STS-32 was, by far, the longest shuttle mission to that point, landing at Edwards Air Force Base on January 20, 1990. At nearly 11 days, it was about three days longer than any mission before. Crew members voluntarily participated in a series of medical experiments, including a pre-flight and post-flight muscle biopsy, to gauge the effects of the extended duration mission. 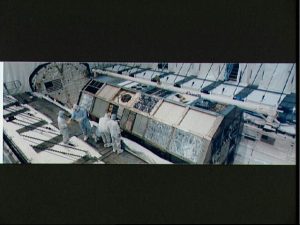 Research teams soon began examining LDEF. Researchers learned that few of the coatings used on LDEF passed the test, leaving designers at the time with limited choices and requiring conservative estimates for end of life.  Although some experiments were destroyed to the point that survivability data was on a simple yes/no basis, other experiments yielded rich, surprising findings that would inform design and material choices for the International Space Station and future spacecrafts.

“LDEF has provided the first opportunity to observe firsthand meteoroid and debris impact  damage on a wide variety of materials and systems, … and, these observations have revealed that designers must consider not just the impact damage, but also the synergistic effects of multiple environments on the impact-damaged region of the spacecraft,” said Richard Petersen, then NASA associate administrator for space technology, speaking at the LDEF Materials Results For Spacecraft Applications Conference in 1992.

Visit APPEL KS’s Shuttle Era Resources Page to learn more about STS-32 and the 134 other shuttle missions that deployed key satellites, repaired the Hubble Space Telescope, enabled important new research, and were instrumental in construction of the International Space Station.