Back to Top
Home/INSIGHT/NASA, NOAA Prepare for GOES-T Launch 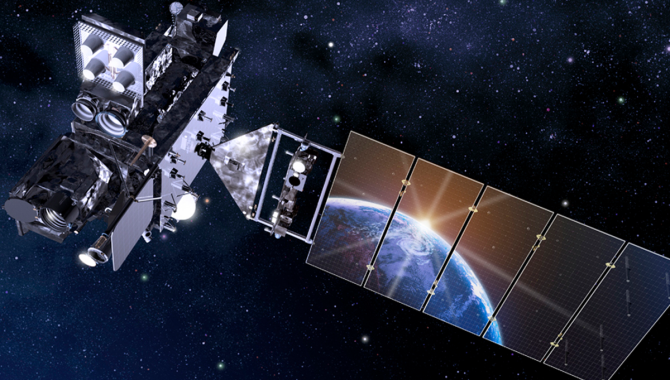 The GOES-R series of satellites, shown here in an artist rendering, provide advanced imagery and measurements for a variety of applications, from detailed monitoring of weather systems to tracking environmental hazards, such as wildfires, dust storms, and volcanic eruptions.
Credit: NASA

In the spring of 1960, NASA launched TIROS-1, the first in a series of Television InfraRed Observation Satellites designed to test applications for nascent satellite technology. By the mid-1960s, the TIROS program was returning composite images from space of clouds moving over the Pacific Ocean toward the U.S. West Coast, showing not just a storm system, but the potential of satellites to revolutionize weather forecasting.

This spring, nearly 62 years later, NASA, working with the National Oceanic and Atmospheric Administration, will launch GOES-T, the third in a series of Geostationary Operational Environmental Satellites that provide advanced imagery and measurements for a variety of applications, from detailed monitoring of weather systems to tracking environmental hazards, such as wildfires, dust storms, and volcanic eruptions. 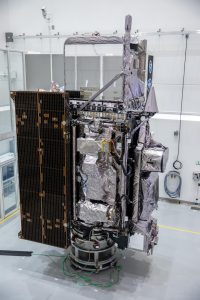 NASA collaborates with NOAA on the GOES-R Program, helping determine the requirements for the satellite, contracting for and overseeing construction of the satellite and many of its instruments, as well as launch services.  NASA’s Goddard Space Flight Center also built the magnetometers GOES-T will use to gather data about space weather.

This is the third satellite in the GOES-R Series, an advanced system that provides impressive, detailed imagery and atmospheric measurements. On January 13, when an underwater volcano near Tonga violently erupted, the system captured unprecedented images of the ash cloud and the atmospheric shockwaves as they raced over the Earth.

GOES-T underwent rigorous testing at Lockheed Martin’s Advanced Technology Center in Palo Alto, California, including simulations of the vibrations and acoustic conditions of launch aboard a United Launch Alliance Atlas V-541 and vacuum testing to simulate the extreme temperatures of space before arriving at Kennedy Space Center on November 10, 2021. Teams were stacking the components in early February, ahead of a launch from Cape Canaveral Space Force Station, as early as March 1.

When GOES-T reaches geostationary orbit 22,236 miles above Earth’s equator it will be known as GOES-18, sometimes referred to as GOES West because it will cover the Pacific Ocean, the U.S. West Coast, Hawaii, Alaska, and Mexico.

“As the operational GOES West satellite, GOES-T will be vital for achieving NOAA’s weather-ready nation goals, helping to save lives and to protect property and resources,” said James Yoe, Ph.D., Chief Administrator for the Joint Center for Satellite Data Assimilation, speaking at a press conference, noting that the satellite’s ability to measure wind speed and direction at different levels of the atmosphere will lead to improved weather prediction models. 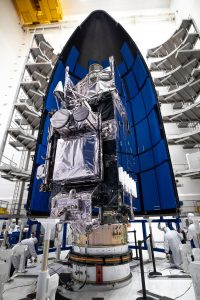 The first half of the United Launch Alliance Atlas V payload fairing is being secured around NOAA’s Geostationary Operational Environmental Satellite-T (GOES-T) inside the Astrotech Space Operations facility in Titusville, Florida, on Feb. 7, 2022.
Credit: NASA/Ben Smegelsky

“Since many of the weather systems over the United States move from west to east, GOES-T, as GOES West, will improve model forecasts for the entire country,” Yoe added. The ABI will also give forecasters detailed information about the formation of atmospheric rivers, destructive weather patterns that can cause billions of dollars in damage.

“… Typically, we’ll be able to have some knowledge about the size of them, how wide they are, we’ll be tracking the winds that are pushing them, and that in turn tells us how quickly they’ll arrive. We’ll use that information in combination with moisture soundings from microwave sensors on NOAA’s polar satellites in order to get an idea of the quantitative precipitation amounts that will be brought to bear there,” Yoe said.

GOES-T will bring dramatic improvements to how the GOES-R system can be used during wildfire season, monitoring the health of surface vegetation to pinpoint danger spots before a wildfire even begins. The GLM will provide emergency responders with locations of lightning strikes that might have touched off a fire, and the ABI is sensitive enough to find the thermal signatures or hotspots of small fires before they begin to burn out of control, giving emergency responders a head start.

“It’s almost impossible to overstate what a significant factor GOES-T will be in the forecasting and responding to wildfires,” Yoe said, adding that this capacity will extend for years after a wildfire is extinguished. “…We’re still looking at the Earth’s surface. We can see burn scars for years after, we can monitor the recovery of the areas impacted by wildfires, how that might impact flooding and other industries such as forestry for years to come. So, before the fire happens, while it’s happening, immediately after, and way after it occurs, the data from GOES-T will be helping to make informed decisions.”

GOES-T will join GOES-16 on orbit, replacing GOES-17, which has a cooling system anomaly and will remain on orbit in a spare capacity. GOES-U will complete the series, with launch currently planned for 2024.