Back to Top
Home/INSIGHT/The Why of Leadership 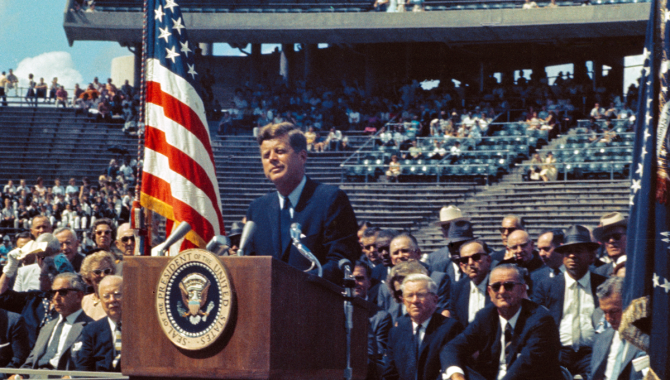 Leadership includes beginning with an organization’s origin story—its “why”—then connecting that “why” with the individual “why” of each of your team members. Here, President John F. Kennedy sets part of NASA’s origin story on September 12, 1962, saying, “We choose to go to the moon in this decade and do the other things, not because they are easy, but because they are hard…”
Credit: NASA

How leaders can foster cognitive diversity and align personal and organizational goals.

The authentic leader. The contrarian leader. The responsive leader. The smart leader. The principled leader. There are enough books about leadership that if a person could read one a day, it would take more than 25 years to finish them—9,488 bibliographic records with the subject heading “leadership” in the Library of Congress online catalog alone. The advice in these books varies widely, with guidance attributed to billionaire investors, Abraham Lincoln, and even Attila the Hun.

“I think leadership is a very misunderstood concept,” said Simon Sinek, author of multiple best-selling books including Start with Why and Leaders Eat Last. “…The requirements of leadership have always been the same, which is we’re responsible to see those around us rise. … We over-indexed on the ‘whole rugged individualism’ thing, you know, and we made heroes out of some of our leaders, and we forgot that it’s really about the team.”

Drawing a distinction between authority bestowed by rank, and leadership earned through team building, Sinek noted that regardless of someone’s position in an organization, that person has opportunities to be the leader that a given situation requires.

“There’s been a lot of study on cognitive diversity and what that brings to an organization and of course, cognitive diversity comes from the diversity of background, experience, education, geography, [and] culture,” Pearce said. Noting that a key element of leadership is creating an environment in which diversity of thought is welcomed, Pearce asked Sinek for his thoughts on how a leader can foster trust in a team.

Sinek noted that one of the foundations of effective leadership is the ability to listen effectively, and to do that, a leader needs to replace judgement with curiosity. When a leader welcomes different perspectives with curiosity, it fosters an openness that better takes advantage of a team’s diversity of thought.

Sinek’s TEDx talk “Start with Why — How great leaders inspire action,” has more than 8.8 million views on YouTube in the past 12 years. Pearce asked Sinek for his thoughts on the challenges of aligning the “why” of individual team members with the “why” of an organization.

“So, fundamentally a ‘why’ is an origin story. That’s basically what it is, right? It’s where you come from and it offers a foundation for everything that you’re going to build upon from that point,” Sinek replied. “The United States has a ‘why.’ It’s written down for us in the Declaration of Independence. Right now, the Constitution is a structural document, it says how we’re going to achieve it. But it’s the Declaration of Independence that really states why we need a nation and why we exist and it’s an ideal.”

“Organizations have origin stories. NASA … has an origin story. It has a document that says why NASA needs to exist. … And if you go back to the way NASA was talked about, especially back when JFK talked about NASA, it’s really about out-imagining and going beyond what anybody else can do, right?” Sinek said.

“…Your [personal] ‘why’ was fully formed by your mid to late teens, based on the experiences you had growing up. You are who you are. Now, if you’re living in balance with that, that’s a different conversation. The discomforts and insecurities that we have are very often because we’re living out of balance from our ‘why’ personally or professionally and the same goes for organizations,” Sinek explained.

The sessions of imaginAviation, which cover a broad swath of aviation topics from the future of adhesives, to high-temperature alloys, to hyper-spectral communications, to NASA’s future workforce is available to watch anytime.