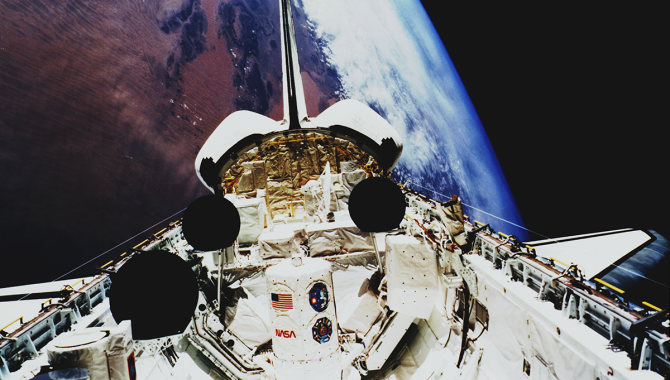 The Space Shuttle Atlantis carried the Atmospheric Laboratory for Applications and Science (ATLAS-1) module in its cargo bay in March 1992 during the STS-45 mission. The ATLAS-1 instruments are back dropped against the Atlas Mountains and dunes in the Iguidi Dune Sea near Mali in the western Sahara.
Credit: NASA

In the early morning of March 24, 1992, 30 years ago this month, NASA astronaut Brian Duffy was strapped into the Space Shuttle Atlantis, prepared to pilot STS-45 on his first spaceflight. To his left was Charles F. Bolden Jr., about to make his third spaceflight and the first as Commander. Duffy, who became an astronaut in July 1986, recalled that he was thrilled with the assignment.

“I learned more about leadership from [Bolden] than I have from any other single person in my life. So, I was real lucky to be there, assigned to that crew,” Duffy remarked in an oral history.

Duffy, an experienced aviator who had flown an F-15 at Mach 2 and trained extensively in NASA’s shuttle simulator, was still amazed by his first 8-minute ride to Low Earth Orbit, and the sheer power of the space shuttle to continue accelerating into the final minute of the launch. 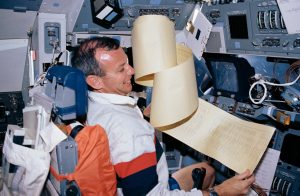 “It’s awesome. … Then the engines cut off and you go from … the most violent place you’ve ever been in your life to the most peaceful place you’ve ever been in your life, in a couple of seconds,” Duffy said. “It’s a real interesting little transition when the engines shut off and all the thrust stops, and all of a sudden you’re free-floating. Everything’s quiet. …Every time, I was equally impressed. Even the fourth time, I just went, ‘Wow. I forgot how much power there is.’ It’s awesome, it really is.”

The mission was the first to carry the Atmospheric Laboratory of Applications and Science (ATLAS), an international collaboration with Belgium, France, Germany, Japan, the Netherlands, Switzerland, and the United Kingdom to study the Earth’s atmosphere, as well as solar science, space plasma physics and astronomy as part of a broader effort to examine the Earth and its systems from the perspective of space.

“ATLAS was scheduled to be a nine-day mission and it was going to be NASA’s first space laboratory mission dedicated to the study of Earth. It was the first in a series of flights called Missions to Planet Earth,” Bolden recalled in an oral history. “It contained thirteen specific scientific payloads, ten of them were dedicated to Earth’s atmosphere, and three of them were solar studies experiments.”

The research focused primarily on the mesosphere, a crucial area in Earth’s middle atmosphere where solar radiation interacts with atmospheric chemicals in complex processes that can be impacted by the electrically charged ionosphere and the protective magnetosphere, which shields Earth from the supersonic stream of charged particles in the solar wind. 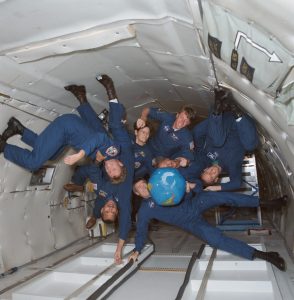 On orbit, the crew was divided into two teams so the scientific instruments could operate 24 hours a day, gathering data in both daylight and darkness for both hemispheres. Duffy had primary responsibility for the blue team. Mission Specialist David C. Leestma, who had been a Navy F-14 Radar Intercept Officer, was responsible for the red team. Duffy and Leestma were responsible for flying the shuttle to the proper orientation to collect the data. Mission Specialist Kathryn D. Sullivan, who earned a Ph.D. in geology and was the first U.S. female astronaut to perform a spacewalk, was appointed Payload Commander for the mission.

Bolden said his biggest challenge as Commander was organizing and integrating a diverse crew of strong personalities. Knowing the schedule would be arduous, he brought in a specialist who administered written tests to the crew members and their spouses to identify their psychological temperament.

“He sat and worked with us and our spouses on what our psychological profile was, what kind of things would set us off, what kinds of things would cause us to [not be] at our peak under stress, and the like,” Bolden recalled. “And then we spent time, crew and spouses, getting to understand what characteristic each of us had so that if we got into a stressful situation, whether it was the spouses on the ground or us on board, that we’d have some idea of where to turn or what to do to try to alleviate the problem…”

“For me as a commander, I found it invaluable because it helped me to understand little quirks that you saw in the crewmembers, both in training and on orbit…,” he added.

The advance work on Earth paid off in space. The first flight of ATLAS was a success, returning information that was instrumental in validating data from satellites monitoring Earth’s atmosphere and leading to the publication of dozens of scientific research papers on subjects such as stratospheric carbon tetrafluoride, trace gas transport in the Arctic vortex, and the distinctive ozone structure in the high-latitude stratosphere. 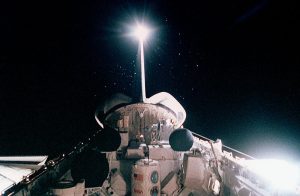 Space Shuttle Atlantis (STS-45) onboard photo of open cargo bay with the forward portion of the Atmospheric Laboratory for Applications and Science (Atlas-1) shown at night.
Credit: NASA

“…You can’t help but realize just … how thin the atmosphere is … when you look out and you see it edge-on… You can block it out with the width of your thumb,” Duffy recalled. “So, you really do have a sense that, wow, this is a small planet. And it is small; you go around it in an hour and a half. It takes longer to drive across Houston in rush hour than it does for us to orbit the Earth. So, it’s not that big and it’s what allows all of humanity to exist, so we collectively have to take care of this little ecosystem that we have, because it’s pretty fragile.”

STS-45 returned to Earth on April 2, landing at Kennedy Space Center. Duffy went on to pilot STS-57 and serve as Commander of STS-72 and STS-92. Bolden served as Commander of STS-60 and was appointed as NASA Administrator in 2009. ATLAS flew again aboard STS-56 and STS-66.