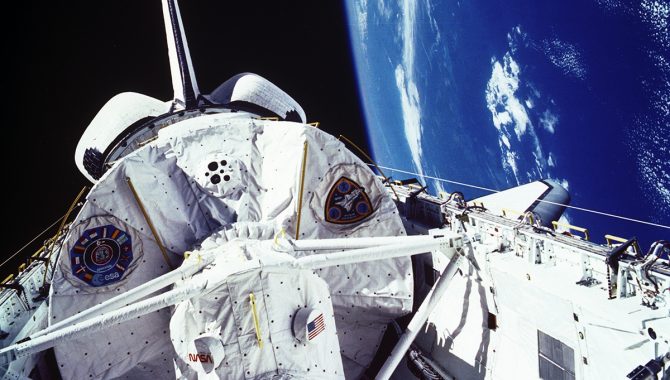 The Space Life Science-1 (SLS-1), modular lab in the cargo bay of Space Shuttle Columbia during STS-40 in 1991. It was the first Spacelab mission dedicated solely to life sciences research. Research focused on the mechanisms and magnitudes of physiological changes during space flight.
Credit: NASA/MSFC

On June 5, 1991, 30 years ago this month, the Space Shuttle Columbia lifted off from Kennedy Space Center’s Launch Complex 39B with Commander Bryan D. O’Connor, Pilot Sidney M. Gutierrez, three Mission Specialists, two Payload Specialists, 30 rodents, and thousands of jellyfish. In the cargo bay was Spacelab-1, a modular research laboratory developed by the European Space Agency (ESA) in a cooperation agreement with NASA. 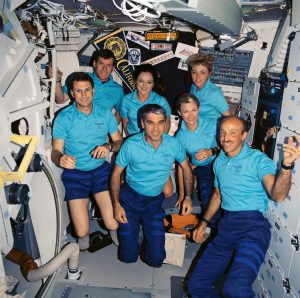 The modular laboratory was 13.5 ft in diameter and about 18 ft long. The crew of STS-40 entered and exited the lab through a tunnel connected to the shuttle’s crew compartment. Spacelab-1 had already flown aboard the shuttle four times, but STS-40 was the first mission in which the research focused entirely on life science.

This was O’Connor’s second spaceflight, having piloted STS-61-B. He was an accomplished test pilot in the U.S. Marines before joining NASA, flying primarily single-pilot aircraft, such as the Douglas A-4 Skyhawk and the AV-8A Harrier. STS-40 presented him with a challenge.

“We had a variety of personality types on our crew,” recalled O’Connor, in an oral history. “It was something new for me. I had come from a tradition in the Marine Corps of single-pilot aircraft, not crewed aircraft, so I was probably experiencing some of the things that are normal for bomber pilots or big transport pilots, trying to get crews to work together and that sort of thing.”

“When you have a crew with such diverse personality types as we had, then that says you’ve got to broaden your understanding. You’ve got to be a little more forgiving of certain things and be more sensitive to other things to communicate properly and to operate as a crew,” O’Connor recalled.

The crew was one of the first to receive training that focused on the communication and coordination tools that work best for each personality type, training that O’Connor recalled was “extremely valuable for me as a commander. When we flew together, [our] crew worked like a well-oiled machine. We completed 100 percent plus of our objectives, and it was a very full agenda we had. We had over twenty major experiments up there, and they did a great job.”

The spirit of cooperation went so far as O’Connor and Gutierrez agreeing to participate as test subjects in most of the mission’s experiments, which were primarily focused on the physiological changes that occur during space flight and how the body adapts to a nine-day stay in microgravity. The research included state-of-the-art baroreflex and pulmonary function tests, echocardiographs, and cardiovascular operations. 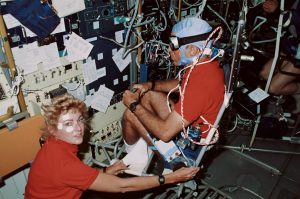 Astronaut James P. Bagian, STS-40 mission specialist, is in a rotating chair while wearing an accelometer and electrodes to record head motion and horizontal and vertical eye movements during the rotations. Payload specialist Millie Hughes-Fulford, lower left, assists with the test.
Credit: NASA

“We did say that we would make ourselves available for I think it was seventeen of the twenty experiments as test subjects,” O’Connor recalled. “The ones that we bailed out of and were not interested in were the ones we considered to be some small risk to our ability to do our job of flying. They had one or two experiments that dealt with the eyeball, where they would put a little lens on your eye, and there was some risk there that you could scratch your eyeball, and although it was very small, we said, ‘We don’t need to take that risk.’ There was also one of them that was designed to see how far you can go exacerbating your vestibular system before you feel sick and get symptoms of Space Adaptation Syndrome, or space sickness. We clearly were not interested in that.”

The mission gave O’Connor insight into the world of human spaceflight research, providing him an appreciation for the questions scientists in the field were working to answer and how they structured their research to arrive at those answers.

“I also got to talk to a lot of people that I wouldn’t have otherwise about what’s actually going on in my body when I’m up there in zero-G [gravity]. Why do I not feel good the first day? What’s happening there? What about my heart? Why does it grow in size and then get back down to a smaller size? They actually took pictures of it shortly after we got up there,” O’Connor recalled.

STS-40 travelled 3.8 million miles over 9 days, 2 hours, 14 minutes, 20 seconds, returning to land at KSC on June 21, 1991. O’Connor went on to a distinguished career in NASA administration, negotiating the framework for the Shuttle-MIR missions, leading a team that found significant design savings in what became the International Space Station, and serving as both the director of the space shuttle program, and Associate Administrator, Office of Safety and Mission Assurance (OSMA). Gutierrez went on to Command STS-59.

Visit APPEL KS’s Shuttle Era Resources Page to learn more about STS-40 and the 134 other shuttle missions that deployed key satellites, repaired the Hubble Space Telescope, enabled important new research, and were instrumental in construction of the International Space Station.