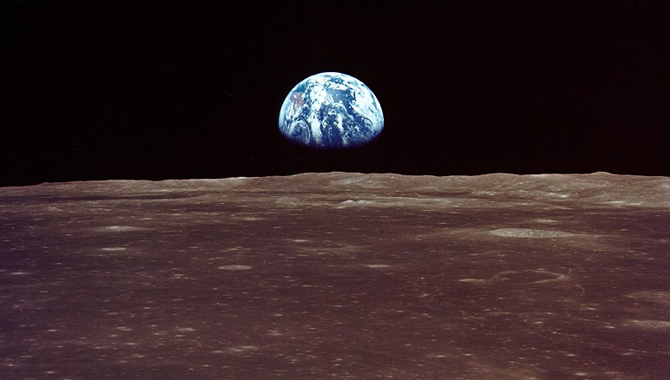 Earthrise viewed from lunar orbit during the Apollo 11. The Space Task Group suggested a Moon base as one goal of a post-Apollo space program.
Credit: NASA

Fifty years ago this month—in the afterglow of Apollo 11—the Space Task Group (STG) delivered an ambitious plan for the future of the United States space program. The plan was the culmination of work that began in February 1969 and continued through the tumultuous summer.

The group was chaired by Vice President Spiro T. Agnew, and included Thomas O. Paine, NASA’s third administrator—who served for 18 eventful months from March 1969 to September 1970—and Robert Seamans, who was then Secretary of the Air Force, but had been NASA’s deputy administrator from 1965-1968.

The STG’s report noted that the clear, concise goal of landing humans on the Moon and returning them safely to Earth had focused the nascent space program in 1961 and suggested that the post-Apollo space program could benefit from a similar goal. Seamans recalled in an oral history the effect President John F. Kennedy’s address to Congress had on NASA, from his perspective.

“…I felt we’d been struggling ever since I … got to NASA, about what our goals really were,” Seamans said. “…all of a sudden it was clear and simple. There couldn’t be a simpler objective to subscribe than going and landing on the moon. I certainly understood the other issues, but I felt this was going to be exciting. I was delighted to be part of it.”

The report noted that a new goal should be substantive and challenge both the nation’s technological capabilities and spirit of adventure, serving as “a beacon, an aim for our activities to act as a guide to both short-term and longer range decisions.”

“We view the challenge of setting new goals, of providing a focus for our future space activities, of expanding the limits of man’s reach and thereby demonstrating America’s leadership in scientific and technological undertakings while maintaining the confidence of the people in the strength and purpose of our Nation, as the key to continued space leadership by the United States,” the STG wrote it its 1969 report.

The group considered several ambitious new challenges that members believed were achievable “within a reasonable time.” These options included a space station in lunar orbit or a base on the surface of the Moon, a vast space station in near-Earth orbit large enough to house 50-100 astronauts, or manned exploration of the planets.

“The Space Task Group believes that manned exploration of the planets is the most challenging and most comprehensive of the many long-range goals available to the Nation at this time, with manned exploration of Mars as the next step toward this goal,” the group wrote in its report, recommending that the U.S. move forward with a goal of a crewed mission to Mars by 2000.

In the report, the STG acknowledges the budgetary realities of such a commitment, which would have followed the significant investment of the Apollo program and come during the Vietnam war. “Now that the national goal of manned lunar landing has been achieved, discussion of future space goals has produced increasing pressures for reexamination of, and possible changes in, our national priorities,” the group writes in the report.

The STG detailed, however, the many benefits that the space program was already producing for the United States, including significant advances in computer technology, solid state electronics, and the development of exacting quality control techniques. Additionally, because the space program’s achievements positioned the United States as a leader in advanced technology, it created an array of direct and indirect national security benefits.

“Achievement of the Apollo goal resulted in a new feeling of ‘oneness’ among men everywhere,” the report notes. “It inspired a common sense of victory that can provide the basis for new initiatives for international cooperation.”

President Richard M. Nixon did not immediately comment upon the recommendations. Nearly six months later, on March 7, 1970, Nixon issued a statement that acknowledged the U.S. space program as an “investment in the future,” but noted the U.S. would not “try to do everything at once.”

“We must build on the successes of the past, always reaching out for new achievements. But we must also recognize that many critical problems here on this planet make high priority demands on our attention and our resources. By no means should we allow our space program to stagnate. … Our approach to space must continue to be bold—but it must also be balanced,” the statement read.