Back to Top
Home/INSIGHT/This Month in NASA History: From the Moon to an Airstream Trailer 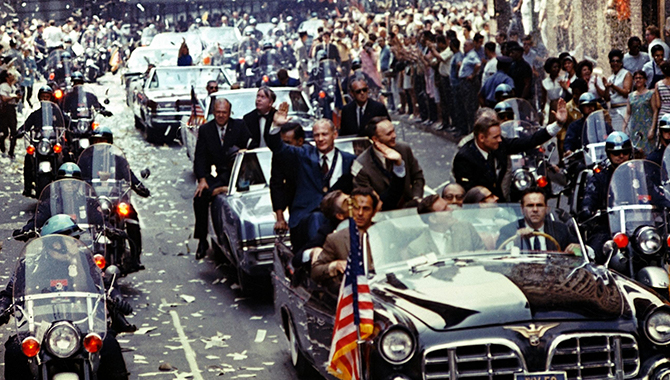 New York City welcomes Apollo 11 crewmen in a showering of ticker tape down Broadway and Park Avenue in a parade termed as the largest in the city's history. Pictured in the lead car, from the right, are astronauts Neil A. Armstrong, commander; Michael Collins, command module pilot; and Edwin E. Aldrin Jr., lunar module pilot.
Credit: NASA/Bill Taub

Fifty years ago this month, on August 10, 1969, the circuitous journey home for the Apollo 11 astronauts ended when they left the sealed portions of the Lunar Receiving Laboratory (LRL) at what is now Johnson Space Center, ending 21 days of quarantine from the moment Neil A. Armstrong and Edwin “Buzz” E. Aldrin, Jr. first touched the lunar surface.

Early in the Apollo program, The National Academy of Sciences had been asked to assess the potential risks of astronauts carrying bacteria, organisms, or other contaminants back from the Moon.  Although the risk was deemed to be small, the potential consequences could have been disastrous, and quarantine seemed a reasonable precaution. And so, NASA developed an extensive quarantine process for returning astronauts.

The astronauts emerged from the Command Module wearing special spacesuits known as Biological Isolation Garments and were washed down with a topical antiseptic. Command Module Pilot Michael Collins remembers it as a difficult start to the quarantine process, as heat built up rapidly within the sealed suits as they were flown via helicopter to the nearby USS Hornet.

“[The suits] are extremely hot. That was a hot day out there, and we were warm anyway,” recalled Collins in an oral history. “I don’t know about the other two guys, but I’m getting hotter and hotter, and I can remember thinking, ‘I’m giving these guys thirty seconds, I’m getting out of this … suit. I don’t care how many bugs there are coming with me,’ you know. And that was about it. I was getting to the end of my tolerance, thermal tolerance.”

Once the helicopter landed on the deck of the USS Hornet, the Apollo 11 crew was guided into a Mobile Quarantine Facility (MQF), a 35-ft-long polished aluminum Airstream trailer that NASA had modified into a pressure vessel and equipped with specialized filters to clean any air that was discharged.

John Hirasaki, a mechanical engineer on the Apollo Program, served as project engineer for the mobile quarantine facility. Because he was tasked with deactivating the Command Module and operating the systems on the MQF, he too was quarantined, along with flight surgeon Dr. William Carpentier.

This was one of four MQFs NASA had built. The Apollo 11 astronauts, along with Hirasaki and Carpentier spent an eventful 88 hours in the MQF, which included traveling on the back of a truck in Hawaii, flying across the Pacific Ocean in a C-141 Starlifter, and then onto another truck to the LRL in Houston.

Although the MQF, which is now on display at the Steven F. Udvar-Hazy Center in Chantilly, Va., maintains the appearance of a nearly standard Airstream trailer, it was extensively modified and tested. Because the MQF flew within a plane, it had to be designed to provide oxygen to its passengers and maintain its structural integrity if the plane depressurized. Following the Apollo 1 fire, components were reexamined for performance in an oxygen-rich atmosphere. Some fabrics were replaced; wooden panels were covered with fluorocarbon paint.

The MQF was plush when compared to the Command Module, containing a living area with six swivel chairs, sleeping quarters with bunk beds, a kitchen that featured a very early example of a microwave oven, and a bathroom. 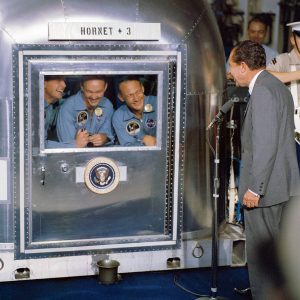 “It was fine. I mean, it was a happy little home,” Collins recalled. “Anyway, we were there, five people happy as clams to be in a confined space. We had gin on board, had steaks. What the hell? I could have stayed in there a lot longer. That was fine. And a hot shower. That was the main thing, really, because I love hot showers, and, of course, there’s not one on the command module. I was grubby and glad to be back. Hot shower, gin, and steak. Wow!”

Once the MQF arrived in Houston, it was docked via plastic tunnel with the 86,000 sq ft LRL, and the five men moved into much larger quarters, which included medical facilities where doctors performed examinations and blood tests, looking for any signs of infection. The astronauts completed reports, spoke with their families via telephone, and played ping pong.

Hirasaki remembered the astronauts were “very enthused and quite excited about [the Moon landing.] I really think they wanted to share it with the world, the experience, the uniqueness of the adventure. They wanted to express, ‘Hey, it really was a new and unique experience,’ and everybody was very up, as you can well imagine.”

At the same time, a team was introducing lunar sample material to plants within the lab, examining samples under a microscope, and even exposing a large collection of white mice to lunar material and the astronauts.

“Had there been some strange malady, maybe these mice’s grandparents had some genetic defect or something, I don’t know, but had the mice all sickened, jeez, I hate to think about it. We’d be in that building today,” Collins said with a laugh.

But, on August 10, with any “Andromeda Strain” fears put to rest, the astronauts emerged from the LRL into a world eager to embrace them as heroes. Three days later, the three were honored with a massive tickertape parade in New York City.

Hirasaki, who was recently married, had a much quieter homecoming, but appreciated it no less. “After we were released from quarantine, it was a wonderful feeling to be outside again—just feel the fresh air and wind on your face,” he recalled.