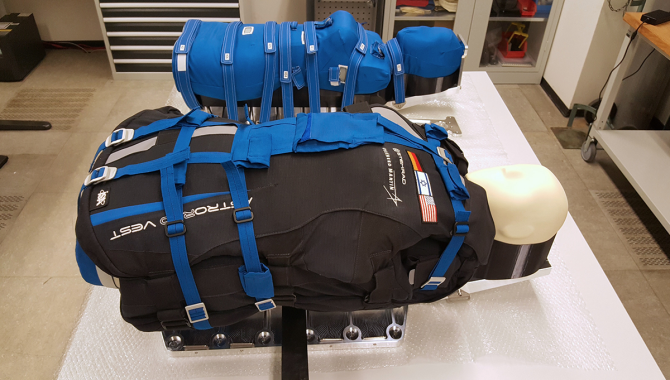 Helga and Zohar are equipped with 6,000 radiation detectors to gather data about how and where the human body absorbs radiation in space and to test a new protective vest for astronauts.
Credit: StemRad

Helga and Zohar will return valuable data to protect astronauts.

At 3 feet tall, and made of plastic, Helga and Zohar are unlikely space explorers, strapped into the Orion spacecraft of Artemis I. But the two “phantoms” are poised to make important contributions to scientific understanding of how and where the human body absorbs radiation in space.

The technologically sophisticated torsos are part of an international collaboration with NASA, the Israel Space Agency (ISA) and the German Aerospace Center (DLR) known as the Matroshka AstroRad Radiation Experiment (MARE). Helga and Zohar include analogs for bones and organs, comprising different density materials. Each figure is fitted with 6,000 radiation sensors. The active sensors and passive dosimeters will record radiation throughout the torso, including in the lungs, stomach, uterus, and bone marrow. 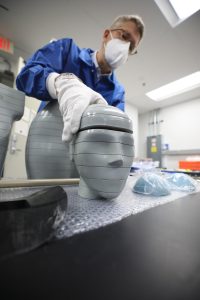 High above Earth, beyond the protective atmosphere and magnetosphere, ionizing radiation blasts through space at nearly the speed of light. Traveling at these fantastic speeds, the atoms are stripped of their electrons, with only their nuclei remaining. When these energetic particles contact human cells, they can wreak havoc, damaging cell walls, breaking DNA, or forming free radicals within the water inside the cells.

As NASA works to establish a long-term human presence at the Moon, protecting astronauts from the health risks of this radiation is a high priority. Astronauts on board the International Space Station are exposed to varying radiation levels that are at least 50 times higher than those at the surface of the Earth. Radiation levels at the Moon are as much as 3 times higher than at the ISS.

“With the … Artemis I mission, we are heading out into free space, so we are leaving the protection of the Earth’s magnetic field, and we’re traveling into [a] more harsh radiation environment,” said Thomas Berger, a radiation expert with the German Aerospace Center, and the Helga and Zohar principal investigator. The sensors within the figures “…will enable us at the end to get a three-dimensional distribution of the radiation dose received by these two phantoms on their way to the Moon and back.”

Helga and Zohar will do more than quantify radiation exposure during the mission. Zohar will be fitted with AstroRad, a protection vest developed by the company StemRad and Lockheed Martin, with support from the Space Florida-Israel Innovation Partnership. The vest, StemRad notes, uses a proprietary shielding design that selectively provides the greatest protection to the body’s most vulnerable organs, while providing a weight advantage over the addition of more spacecraft shielding.

“So, we’ll use … these two phantoms in Orion to measure not only the radiation load they will receive, but to test also possible new radiation protection measures,” Berger said.

AstroRad was designed particularly to shield astronauts during solar storms, according to Shirit Schwarz, Director of Product Management at StemRad. “…Storms in space can last for days and even weeks. So, the AstroRad could potentially enable the crew to perform … daily activities, even during the solar storm while being protected by the vest…,” Schwarz said. 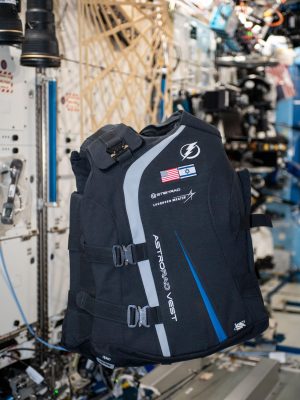 A view of the AstroRad Vest in the Destiny module aboard the International Space Station (ISS).
Credit: NASA

“The inner unique protective cores are made of thousands of high-density [polyethylene] hexagons. The hexagons are connected to form a solid and yet flexible structure,” Schwarz said. “This unique design allows for flexible movements and comfort of the user. The [polyethylene] material was chosen since it’s high in hydrogen, and hydrogen is the most effective element for shielding charged particle radiation like solar protons.”

Helga and Zohar are referred to as phantoms, a term used for the highly detailed, three-dimensional computerized models of the human body—including bones and more than 100 organs—that are used to study medical and occupational radiation exposure and protection. These digital phantoms are used in the design of cancer treatment centers in hospitals, for instance.

Helga and Zohar join Commander Campos in the Orion spacecraft on Artemis I. That life-sized mannequin, strapped into the commander’s seat, wears an Artemis space suit and is fitted with several radiation sensors, as well as sensors to measure the forces it experiences at launch and during the spaceflight. The commander is named after Arturo Campos, an electrical engineer who played an instrumental role in saving Apollo 13, quickly adapting the untested contingency plans he wrote just a year earlier for the new situation.

Click here to learn more about space radiation in our podcast episode “Effects of Space Radiation.”