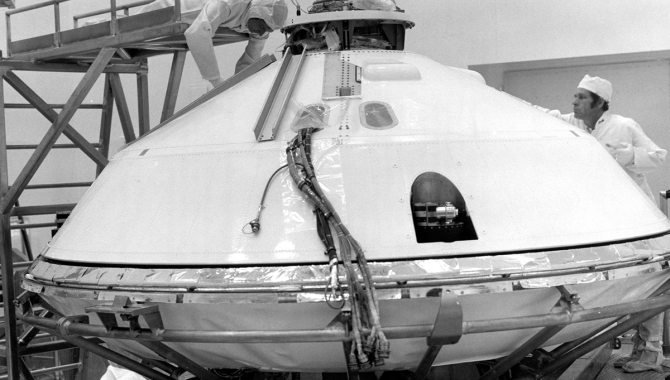 On August 20, 1975, 47 years ago this month, a Titan III-Centaur rocket launched from Cape Canaveral, Florida. The Titan III-Centaur was a workhorse of mid-1970s planetary missions, towering 160 ft. over Florida’s Space Coast. It launched with 2.4 million lbf of maximum thrust from a pair of solid rocket boosters and an additional 520,000 lbf of thrust from its core first stage. The spacecraft aboard, Viking 1, was bound for the surface of Mars.

“…Our knowledge of Mars at that time was incredibly poor,” recalled A. Thomas Young, who served as Mission Director of the Viking Project. “We knew little about the atmosphere, which was critically important, and the smallest thing we had seen on Mars was about the size of the Rose Bowl. That was the level of knowledge that we had at that time.” 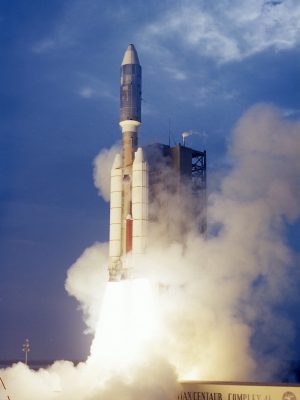 The Titan III-Centaur carrying the Viking 1 Lander lifted off on August 20, 1975.
Credit: NASA

In early 1964, as NASA was preparing for the first test flight of Project Gemini and working on designs for Apollo, teams within the agency were already studying the feasibility of landing a large, robotic spacecraft on the surface of Mars in the next decade. Engineers faced several significant challenges, including that existing heatshield technology was too heavy for the payload limitations, and no parachute system at the time could deploy at the required speeds—more than 900 miles per hour.

There was much that scientists wanted to know about the planet’s orbit, size, mass, gravitational and magnetic fields, atmosphere, and surface structure. Viking 1 carried a suite of instruments—including an imaging system, gas chromatograph mass spectrometer, seismometer, a weather instrument package, and a remote sampler arm—to return the necessary data. But before the Viking Project could answer questions about Mars, NASA had to answer questions about the Viking Project.

The ultimate shape of the mission hinged on a Saturday at NASA’s Langley Research Center, when teams presented research results and recommendations from years of study to agency leaders. Young recalled in an oral history that John E. Naugle, then NASA’s Associate Administrator for Space Science, began the meeting by noting that the American flag had accidentally been hung upside down that morning. “…I don’t know if this is a good omen or not…” Young recalled Naugle joking about the distress signal.

“The big issues were, is it a hard lander or is it a soft lander. Is it a short-lived lander or a long-life lander?” Young recalled in an oral history. “Should it be three days or multi-months? Then, the question was, should there be an orbiter with it, or should there be a flyby module that is the mother ship on the way to Mars and then the lander separates and lands?”

NASA chose an ambitious option in an era of budget cuts, electing to build twin 5,125-pound orbiters mated to 1,270-pound landers. The orbiters would circle the planet, gathering data for 120 days. The landers would make the first American attempts to survive 7 minutes of terror and return data from the planet’s surface. 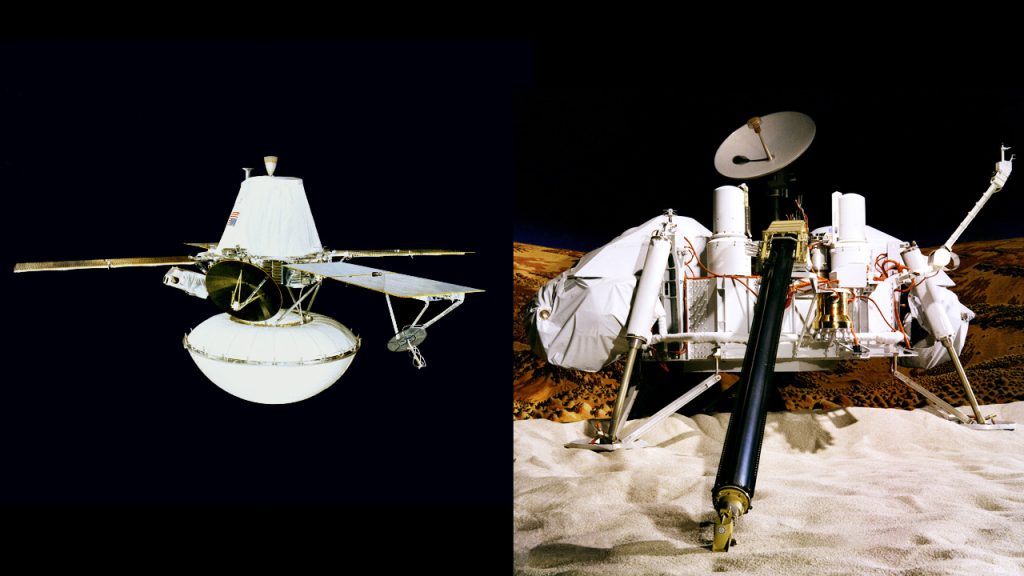 Viking 1 consisted of an orbiter (left) and a lander (right). The lander was equipped with a robotic arm to collect samples from the surface.
Credit: NASA

“I really didn’t appreciate, even in the middle of it, what an incredibly difficult thing it was. That was about as hard a thing as you could do from a robotic spacecraft standpoint,” Young said. “Almost everything was new; the systems were new on the spacecraft. We had something called a plated-wire memory computer, where the memory really is plated wires about the size of a human hair. That almost brought us to our knees.”

To honor international agreements and avoid any possibility of introducing microorganisms from Earth to Mars, the spacecraft was sterilized in a 45-hour process that included 20 hours at 233 °F and nearly no humidity. “That meant that the tape recorder had to have metal tape for the recording…; it meant everything in there had to be sterilized, which was something that we had never done before,” Young recalled.

Following launch delays, Viking 1 was scheduled to land on Mars on the American Bicentennial, July 4, 1976. However, when the team received the first images of the targeted landing site from the spacecraft, the terrain was surprisingly and prohibitively rugged.

“Quickly, we abandoned the landing site and abandoned landing on July the 4th,” Young said. “Looking back on it, that was another fairly significant factor—because I remember the process when we decided that—we never hesitated one minute to abandon July the 4th for the safety of the mission. …It wasn’t a decision we asked anybody about. We made it and we did it because as far as we were concerned, it was clear.” 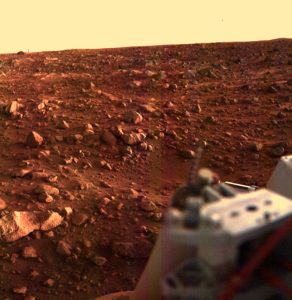 This photo of sunset on Mars is just one of thousands of images sent to Earth by Viking 1, the first American spacecraft to make a soft landing on Mars. Viking 1 launched on August 20, 1975 and returned data from the Martian surface for more than 7 years.
Credit: NASA

“We picked a site, landed, and fortunately, we were successful. Not too far from us was a rock—if we’d have landed on it, it would have destroyed the spacecraft,” Young said. At a press conference discussing the landing, reporters asked James S. Martin, Jr., Viking Project Manager, if the landing was lucky. “…Jim said, ‘There’s no such thing as luck.’ He was that kind of person. They asked me, I said, ‘Look, I don’t believe in it, but I’ll take all I can get.’ ”

Viking 1 landed on a large, relatively flat plain known as Chryse Planitia, operating there for more than seven years. The mission, coupled with Viking 2, made important contributions to human understanding of Mars, from the planet’s cold— -81 °F—average temperatures, to the presence of volcanic soil, to the characteristics of the thin, carbon dioxide rich atmosphere, to data from the first Martian soil samples.

“If there’s any message I’ll give you out of all this, the greatest advantage I’ve had is just working with super people,” recalled Young, who went on to serve as Director of the Goddard Space Flight Center. “If you work with super people, you can’t help but learn something in the process.”