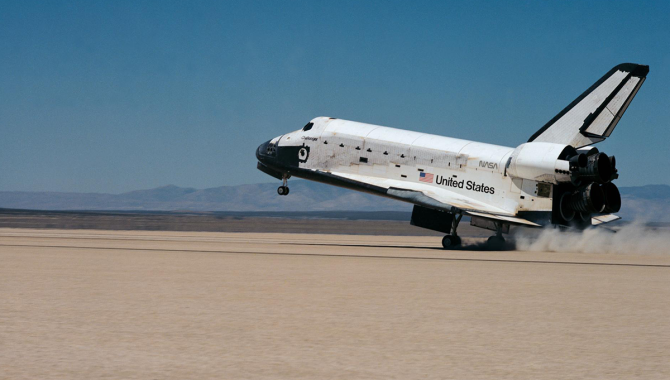 The Space Shuttle Challenger, with its seven member crew and battery of scientific experiments aboard, eases its rear landing gear onto the dry lake bed at Edwards Air Force Base in California, completing STS-51-F.
Credit: NASA

When the Space Shuttle Challenger roared off Launch Pad 39A on Monday, July 29, 1985, it was a hot and sunny afternoon at Kennedy Space Center. About three and a half minutes into the flight, Commander C. Gordon Fullerton and Pilot Roy D. Bridges, Jr., received indication that one of the two sensors on Challenger’s center engine high-pressure fuel turbopump had failed.

Two minutes, and 12 seconds later the second sensor for the center engine failed. 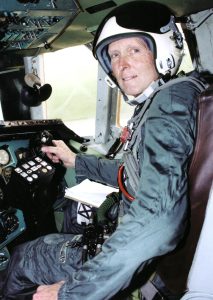 “Mission Control, Houston, we have a center engine down on the Challenger,” Fullerton reported. Challenger’s altitude was 58 nautical miles, 275 nautical miles down range, and it was traveling about 13,000 miles per hour.

STS-51-F was already past the point it could return to land at Kennedy Space Center, and not yet to the point it could make a high-speed trans-Atlantic landing (TAL) in Zaragoza, Spain, had it lost a second engine. The team at Mission Control made the call for what was the shuttle program’s only Abort to Orbit (ATO), a procedure in which the shuttle proceeded to a lower, stable orbit than originally planned.

“The crew has been instructed to Abort to Orbit,” Fullerton repeated. “Again, we’re in an Abort to Orbit case. We have two engines up and running, one engine down.”

Gordon Fullerton was part of NASA Astronaut Group 7, introduced to the public between the first and second Apollo Moon landings. By the launch of STS-51-F, Fullerton had already made important contributions to the shuttle program, piloting three of the five free flight tests of shuttle prototype Enterprise, with Commander Fred W. Haise, Jr.

The flights uncovered important design issues that were fixed, including a flaw in the design of the flight control software, discovered during the final flight, that led to pilot-induced oscillation, Fullerton recalled, in an oral history. “…We bounced around and shocked a lot of people, probably more than—it didn’t look that bad from inside the cockpit. But, again, that’s why you do tests. You find out.”

To engage the shuttle’s ATO program, Fullerton had to turn the ATO dial and then press a button. With this, the shuttle’s Orbital Maneuvering System quickly burned off about 4,400 pounds of fuel, which provided additional thrust, but more importantly lightened Challenger as it pushed higher with two engines toward the desired orbit.

About 8 minutes and 15 seconds into the flight, a sensor on engine 3 failed. Challenger was now down to three of the six sensors, and beyond the point it could readily jettison the external fuel tank and perform a TAL. Faced with the possibility of losing engine 3 to what would later be learned was an issue with the sensor, Mission Control chose to inhibit the sensors and have trained personnel monitor engines 2 and 3 for the approximately 90 seconds until the spacecraft reached main engine cutoff. 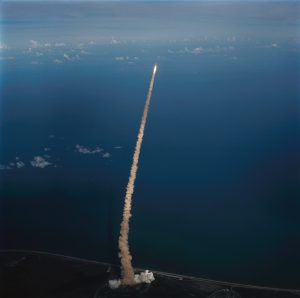 “It was a good team…, and it was a great mission,” Fullerton recalled. “Some of the missions were just going up and punching out a satellite, and then they had three days with nothing to do and came back. We had a payload bay absolutely stuffed with telescopes, instruments. Ours was the first time we’ve flown around the clock. …The first two-shift operation to run all these things. We had somebody up and working [all the time].”

STS-51-F was the second mission to fly Spacelab, a flexible configuration of pallets, modules, or support structures containing science experiments. In this configuration, Spacelab was three pallets with instruments that would operate directly in the space.

Other experiments tested advanced cooling systems, observed infrared radiation, studied human and plant biological processes in space, measured ultraviolet radiation, and examined the ionosphere. The flight plan included precision timing of the experiments, much of which had to be rewritten to account for Challenger’s lower orbit.

“…The ground worked overtime because everything was sequenced by time because it’s an astronomy thing. Whether we’re on the dark side or the light side, all that had to be rewritten. And it all worked out great. We even made up for the fuel we’d had to dump on the way up because of the engine failure and eked out an extra day on it. We were scheduled for seven and made it eight,” Fullerton said. 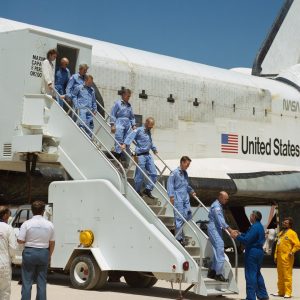 The mission also marked the only battle of the “Cola Wars” to occur in space, with both Coca-Cola and Pepsi developing special cans with nozzles that dispensed their carbonated beverages in a controlled manner in the weightless of low Earth orbit. The products were not included in later flights.

STS-51-F landed on runway 23 at Edwards Air Force Base on August 6, 1985. Years later, Fullerton would recall the mission as the greatest challenge of a career that included flying at least 135 different aircraft for a total of more than 16,000 hours. In addition to the Abort to Orbit and reworking the entire flight plan as a result, the Instrument Pointing System for some of the experiments didn’t work as designed and required a software rebuild.

“…There were lots of things you could point to that said this wasn’t a piece of cake. … We’d endured our engine loss and takeoff and wrapped it all up, came back here with a great feeling of accomplishment. We knew we’d also [faced] challenges with getting the instrument-pointing system operating. It didn’t work worth a hoot to start. So, the whole crew had a hand in recovering from what could have been a real bust, to a great flight,” Fullerton said.