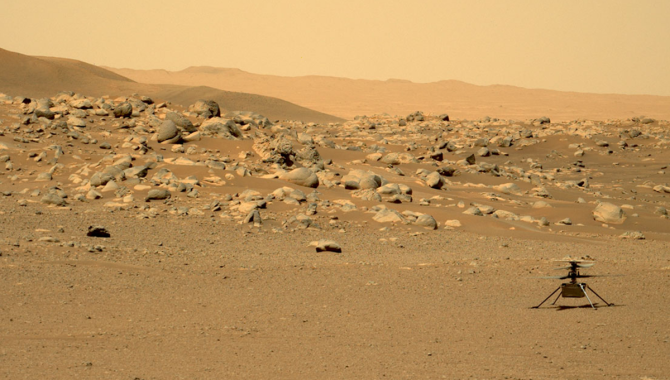 NASA’s Ingenuity Mars Helicopter sits on Airfield D, near the Perseverance rover on the surface of Mars. NASA has added two Ingenuity-class helicopters to the design of the Mars Sample Return campaign as backups for sample retrieval.
Credit: NASA

Campaign will employ a pair of helicopters and rely on Perseverance.

Near the equator of Mars, where nighttime temperatures can plunge to more than -100 °F, the remnants of a fan-shaped delta stretch for miles along the western boundary of Jezero Crater. This delta, scientists believe, formed billions of years ago where a large, winding river once flowed into an expansive lake—about 28 miles across. Recently, NASA’s Perseverance Rover collected, sealed, and stored another rock sample from the delta, the 12th overall sample of the mission.

Scientists became increasingly intrigued by Jezero Crater in the 2000s, as they analyzed images from NASA’s Mars Reconnaissance Orbiter and found mounting evidence that the now-dry lakebed was filled with water for significant periods of time twice in the planet’s past, billions of years ago. This evidence, including the discovery of clay and carbonate deposits and shoreline sediment at the site, make it a prime target to search for evidence of past life on Mars.

“The delta at Jezero Crater promises to be a veritable geologic feast and one of the best locations on Mars to look for signs of past microscopic life,” said Dr. Thomas Zurbuchen, the associate administrator of NASA’s Science Mission Directorate, in a press release. “The answers are out there – and Team Perseverance is ready to find them.” 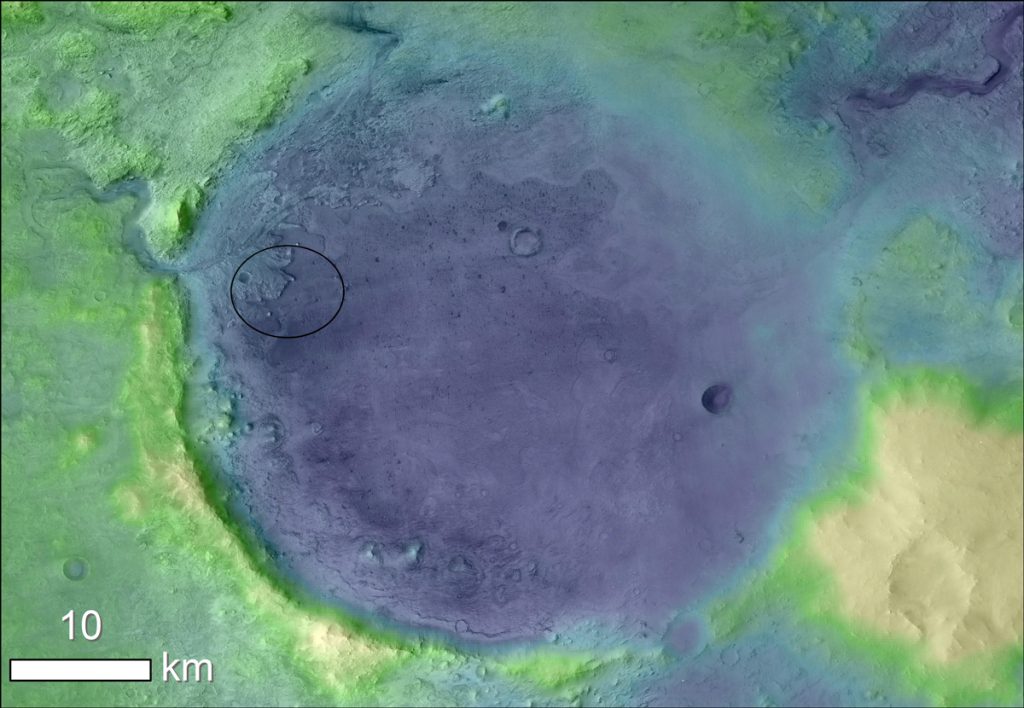 The color added to this image of Jezero Crater helps the crater rim stand out clearly, and makes it easier to spot the shoreline of a lake that dried up billions of years ago. The oval indicates the landing site.
Credit: NASA/JPL-Caltech/MSSS/JHU-APL/ESA

The collection and storage are just the first, intricate steps in an ambitious mission to return Perseverance’s lightweight, hermetically sealed titanium tubes to Earth, filled with the first Martian soil and rock samples. The Mars Sample Return (MSR) campaign will send multiple, robotic spacecrafts to Mars, each working carefully in concert with the others, to gather and stow the tubes, launch them off the Martian surface, and return them to Earth as early as 2033.

“…The mission is happening right now, as we speak. The Perseverance Rover continues collecting scientifically selected samples on Mars right now,” said Zurbuchen, speaking at a recent NASA press conference. MSR is a joint effort of NASA and the European Space Agency (ESA). NASA is nearing completion of the conceptual design phase, also known as Phase A, finalizing concepts for bringing the high-value samples to Earth. 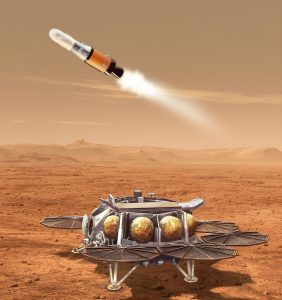 This illustration shows a concept for a proposed NASA Mars lander-and-rocket combination that would play a key role in returning the samples to Earth.
Credit: NASA/JPL-Caltech

What is emerging from Phase A is a concept in which a Sample Retrieval Lander (SRL) developed by NASA lands on Mars carrying a rocket known as the Mars Ascent Vehicle (MAV) and two Ingenuity-class helicopters. Perseverance would deliver the sample tubes to the MAV, where an ESA-provided robotic sample transfer arm would insert the samples into an Orbiting Sample (OS) container atop the MAV. This volleyball-sized capsule would be launched into space aboard the MAV and captured by an Earth Return Orbiter (ERO) developed by ESA, where it would be sealed in a sterilized container.

This concept eliminates a second lander that would have carried a new rover to the surface of Mars to serve as a backup in collecting samples if the Perseverance rover became unable to perform that function. The newly added Ingenuity-class helicopters will now serve as the backup collection method.

“I think our overall approach in adding the helicopters … was to provide a backup capability to what is the prime path of Perseverance, which we have a lot of confidence in given that it’s been operating successfully,” said Richard Cook, the program manager for Mars Sample Return at NASA’s Jet Propulsion Laboratory. “Perseverance is very, very much a twin to Curiosity. And the Curiosity Rover is coming up on its 10th anniversary on the surface of Mars. It has been a good demonstration that a rover of that caliber and that class can survive on the surface of Mars for 10 years.”

The MSR helicopters will capitalize of the stunning success of Ingenuity, which has flown on Mars 29 times, reaching an altitude of 39 ft. and traveling as far as 0.43 miles. The MSR helicopters will likely be slightly heavier, fitted with wheels at the base of the landing legs to enable them to travel brief distance over ground. They will also be fitted with an arm to secure sample tubes that Perseverance has left in depots on the surface of Mars.

“In this scenario we’re talking about…, each of the helicopters would be able to operate independently. They would fly out to the depot location from where SRL lands, would land in the proximity of the sample tubes, roll over to [them], pick one up, then fly back to the proximity of the lander, roll up to the lander, and drop it in a spot where the ESA sample transfer arm could pick it up and put it into the MAV,” Cook said, speaking at the NASA press conference.

If the helicopters aren’t needed for sample retrieval, they could serve other functions, including observing the area around the MAV and Perseverance, providing valuable perspective about the terrain. They could also record the launch of the MAV, the first launch of a spacecraft from the surface of Mars.

“…Mars Sample Return is a unique mission because it combines both scientific and exploration goals by returning what I’d say are priceless scientific treasures from the Red Planet that will be studied in laboratories here on earth, worldwide, for the next 50 years,” said Dr. David Parker, ESA’s Director of Human and Robotic Exploration. “It will answer fundamental questions about Mars, its early history, its relationship with the Earth, and indeed the whole of the solar system.”

Parker noted that the cataloged samples that MSR returns to Earth will provide “ground truth” about the geological contexts from which they were collected and that, in turn, will help scientists more accurately date all the features on Mars.

“At the same time, the Mars Sample Return, you can think of it as an essential precursor or steppingstone to an eventual human mission to Mars, by demonstrating the engineering and operations of a complex, multielement mission up to 400 million km from Earth,” Parker said.