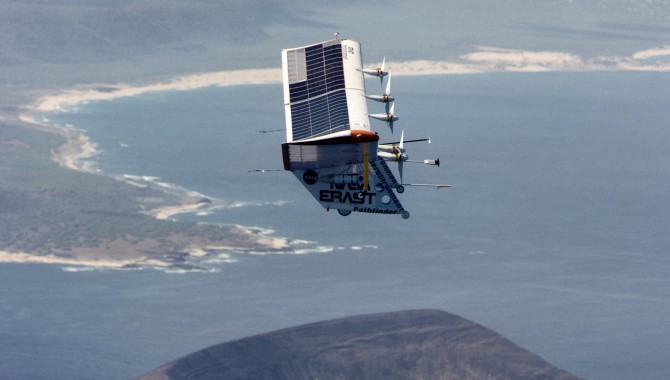 BY BEN BRUNEAU AND KERRY ELLIS

When beginning a project, most project managers look first for budget approval and a team that will make the project succeed. To garner NASA’s continued support after a project has begun, many rely on progress reports and updates to senior leaders that will convince them the project is worth continued investment. But two project managers took a different approach: they convinced their local communities that they could personally benefit from the research. By looking outside NASA and gaining local support, the managers did not need to spend all their time convincing higher-ups that the project should continue. The community helped do it for them. 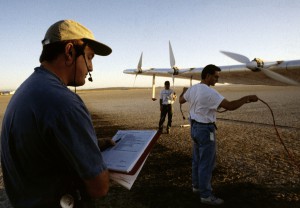 Dougal Maclise and Jenny Baer-Riedhart worked together in NASA’s Environmental Research Aircraft and Sensor Technology (ERAST) program and teamed up on a project called Pathfinder, an unmanned, solar-powered airplane. The Pathfinder project was based in Kauai, Hawaii’s northernmost island, and its goal was to develop a solar-powered unmanned aerial vehicle that could remain aloft for many hours to capture research data.

Pathfinder’s payload was a small camera attached to the fuselage. Maclise immediately began thinking of ways to use the technology to benefit others. “My objective was to look for new ideas, new ways to use our information. For example, we planned to take pictures of the forests to collect data on agriculture. Then we met somebody who was talking about mapping roads. Suddenly we were aiming our camera at the roads, too,” he says.

Maclise focused first on sharing the technology and its potential with the local scientific community. “To help scientists understand the potential value of our data to them, I went on marketing trips around the islands. I met scientists who had no idea about aerial photography and what it could do for them. I tried to explain to them how chlorophyll reflects infrared — what the camera was capturing — more than it reflects green, and how it showed the stress of the plants,” he explains.

Recognizing this potential for photo-mapping plant strain, Maclise expanded his audience and went to the local agriculture industry. He began visiting sugarcane producers and tried to explain how the Pathfinder project could help them grow their crops, but it wasn’t until he demonstrated aerial photography’s benefits that interest grew. “I went for a ride with a sugarcane producer in his helicopter and took pictures of crops to demonstrate the value of the project and to whet his appetite for wider-scale images available from Pathfinder,” Maclise explains. “Later, when I showed him the pictures, he pored over them. Within a day he was using the information we’d collected to fix broken irrigation lines. Word of that got around to other parts of the community, like the coffee growers, and they began to see how useful aerial photography could be to them.” 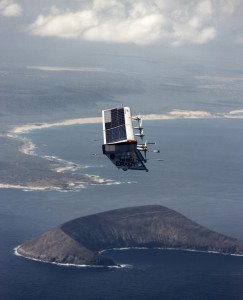 Baer-Riedhart recognized that a broader approach to sharing information about the Pathfinder could be useful, and she approached a Kauai resident the team had gotten to know very well, Dave Nekomoto. Nekomoto helped open many doors in the Kauai community for the NASA project. “We involved the Kauai Community College by hiring students to work for us at the Pacific Missile Range Facility (PMRF) and introducing them to advanced solar technology. This was done on Dave Nekomoto’s advice, and he put us in direct touch with the right people at the college,” Baer-Riedhart recalls.

The Pathfinder team also learned from Nekomoto the high regard Kauaians have for those who educate their children, so Baer-Riedhart broadened their information-sharing approach even more. “Working with the base commander and the PMRF public affairs office, the NASA and AV team orchestrated an open house that brought in approximately 1,000 local schoolchildren to see the Pathfinder, its payloads, and key parts of the PMRF support equipment. We jokingly called this event the ‘1,000- Kid March,’ and the name stuck,” Baer-Riedhart shares. “It was tremendously successful, and students and teachers from across the state participated.”

Nekomoto was also quick to let Hawaii’s political machine know what was going on with the Pathfinder project. Garnering this political support resulted in Hawaii’s entire congressional delegation sending a letter to NASA commending the team on the project’s success. “Suddenly money that hadn’t been available before appeared [from NASA], and this gave the project some extra lift, so to speak, making our attempts at another world-record-altitude flight an even more viable goal,” Baer-Riedhart explains.

People in the community who could benefit from the Pathfinder technology became valuable to Pathfinder’s success. These technology users became customers of the project. “Normally, the customer gives you money in exchange for something you give him,” Maclise explains. “Those people weren’t giving us money, but they’re the users of the information we could provide to them, so we collected their needs.” By meeting their needs, the team gained increased support and recognition from the community.

Embedding the project into the surrounding community kept Pathfinder alive. “The reality is that every year you have to defend your program,” Maclise says. “The best way to keep a program alive is to get the user communities to say they need the data your program provides them. Thus it behooves you to spread your base of support far and wide.” 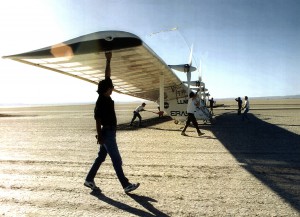 “Many times in our projects we think that just being smarter than someone else or having the best idea is all we need,” Baer-Riedhart shares. “That helps, no doubt, but you’ve got to understand the human side of things. We came to Kauai not knowing how the human dimension would figure into our activities, but we understood that however it worked itself out was going to be critical to our success. That’s why we set aside money in our budget specifically for the kinds of activities described here. Call it marketing or public relations, but whatever you call it, by the time we left Kauai, we had probably spent 20 percent of our project time on it.”

That effort resulted in project success, as the Pathfinder took flight on September 11, 1995, and set the first altitude record for solar-powered aircraft at 50,000 feet during a twelve-hour flight. In 1998, the plane was modified and renamed the Pathfinder- Plus project. It continues to be adapted and modified for scientific exploration as new possibilities for its use are investigated. These possibilities include monitoring forest nutrient status, detecting crop damage or fires, establishing commercial communications, and creating emergency communication links for recovery and relief workers.

Ben Bruneau works as a Knowledge Sharing Analyst in the Academy of Program/ Project and Engineering Leadership (APPEL). He contributes to the programs under the Knowledge Sharing line of APPEL. These contributions include work with ASK Magazine, Masters Forums, and the Project Management Challenge conference. Ben holds a Bachelor of Science Degree in History from the University of South Dakota.