Back to Top
Home/22/ASK Magazine/Profile of a Leader: Orlando Figueroa 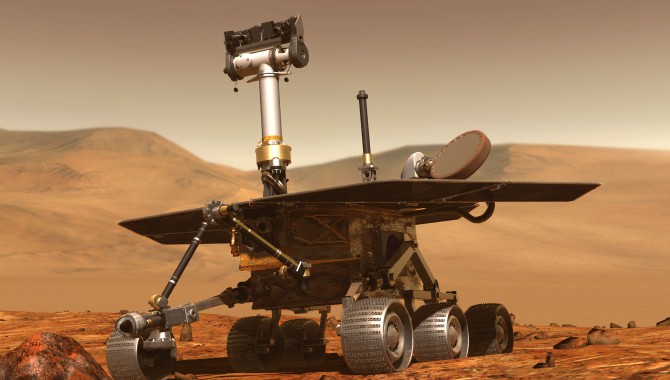 Orlando Figueroa began his NASA career twenty-seven years ago at Goddard Space Flight Center, not knowing he would eventually become the Center’s Director of Applied Engineering and Technology — and Federal Employee of the Year. 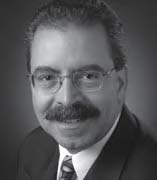 Dr. Ed Weiler, who nominated him for the award, describes Figueroa’s unusual ability to “cut through the tape and get the job done.” “Figueroa has a fierce determination to do a job well and isn’t afraid to speak his mind,” said Weiler . “Those qualities explain why he is Employee of the Year and made him the ideal Mars Program Director .”

Figueroa was born in San Juan, Puerto Rico, and obtained a Bachelor of Science Degree in Mechanical Engineering from the University of Puerto Rico in 1978. He moved to Maryland and took his first steps with NASA at Goddard, where he joined the Heat Capacity Mapping mission, which mapped the land over the United States, during its integration and test phase. 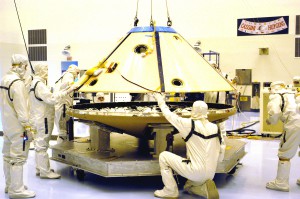 Technicians maneuver the aeroshell for Mars Exploration Rover 2 onto a workstand in the Payload Hazardous Servicing Facility at Kennedy Space Center. 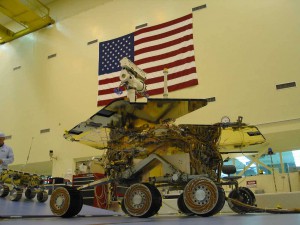 “Imagine coming out of school as an engineer all gung- ho about applying whatever I learned and being part of the team that took this mission to the launch pad and launched it successfully,” Figueroa said. His first mission became one of his most memorable, not just for witnessing his first launch but for the lessons he learned from the team.

“This group of people embraced me as part of the team,” said Figueroa, “and two of my supervisors took very seriously the role of mentorship. John Webb and Joe Dezio met with me often to talk about the job, my progress, and to provide guidance.” It was during this mission that Figueroa also learned to keep his eyes on the goal, and he took that lesson to heart during future missions that posed difficult challenges.

Those missions were not long in coming. After applying his determination and skill to missions that included free fliers and the shuttle and to line management positions, Figueroa was approached by Tom Huber and Alan Sherman — Director and Deputy Director of the Goddard Engineering Directorate — to manage the Small Explorers program in 1990. This program represented a move from huge “Battlestar Galactica” vehicles, which might launch once per decade, to vehicles that provided more frequent flight opportunities to the science community. But engineering these smaller vehicles was not the only measure of success. “We knew we had a responsibility not only to build extremely capable scientific spacecraft with relatively small resources but also to help build a capability in the commercial sector so they could also do this on their own,” Figueroa recalled.

To put this program on the path to success, he first set about establishing an environment of teamwork and mentorship like the one he had encountered when he first joined NASA. First he had to get to know the team. That required a lot of walking around and face-to-face interactions. This also allowed him to get a sense of what was going on and what was getting in the way. “One of the things that I learned as I was growing up in the system was to be able to very quickly identify areas that needed attention, that were not working as they should to fulfill the end goal of mission success,” Figueroa said.

He identified key areas that needed attention before the goal could be achieved and went after them with zeal. This quickly led to several small wins, which helped people feel successful early and remain motivated. “I am very open and honest in communicating what I see. It was very direct, not behind anyone’s back. It was observing what we need to do and making corrections along the way,” Figueroa said. “We engaged the contractors and other organizations in frequent meetings to discuss progress and deal with issues promptly. We dealt with whatever was getting in the way of completing the deliverables swiftly.”

After three successful missions in the Small Explorers program and getting two more on their way, Figueroa moved on to the Large Explorers program, where the X-Ray Timing Explorer and the Advanced Composition Explorer were in development, and a new mission demanding a new approach was looming on the horizon. Headquarters posed the challenge of completing the Far Ultraviolet Spectrometer Explorer mission for half the cost of what was initially envisioned.

Johns Hopkins University put together a strong proposal for the mission. A strong proposal, however, was not enough to ensure mission success. “I knew many of the players at Johns Hopkins,” Figueroa said, “so I started to build a relationship with these individuals.” This allowed NASA and Johns Hopkins to quickly create a collaborative team. “The way you build that [collaboration] is setting up the channels for frequent communication — daily, if needed, or weekly. This gives them the sense that not only am I soliciting for them to open the door, but that I am willing to open the door as well,” he said.

Foreign contributions, batteries, guidance and navigation sensors, and detectors represented challenges that threatened the cost and schedule commitments and required careful and frequent coordination. After the mission launched successfully, Figueroa attributed a large part of that success to good teamwork and the communication his team and the Johns Hopkins team established. “We could talk frankly about anything that was going on at any time, and we dealt with issues promptly before they could grow or, worse, be forgotten,” he said.

The skills and knowledge developed through these experiences were critical when Figueroa eventually moved to the Mars program. Prior to becoming the Mars Program Director, Figueroa was the Deputy Chief for Systems Engineering for NASA when the Agency was dealing with the Mars Climate Orbiter and Mars Polar Lander mission failures. In that position, he focused on how to strengthen systems engineering and software capabilities throughout the Agency. When he was approached to take over as director for the Mars program, he knew what to avoid.

“In the late ’90s version of the Mars program, we were moving very aggressively not only to do orbiter and rover missions but also to bring samples back to Earth as quickly as we possibly could. We were trying to do this with an extremely frugal budget, so we were always operating very close to and, unknowingly, beyond the edge. The failures demonstrated that we were violating some of the most fundamental principles of engineering and management. We were trying to focus our attention on the bigger, more visible issues, while the system of checks and balances diminished to the point that many small, yet important, things were being overlooked — the accumulation of which was building undue risk in the system,” Figueroa said.

Following the restructuring of the Mars program and upon taking over its leadership, Figueroa focused on these issues and others that the individual review teams had uncovered. He again applied his earlier lesson of quickly identifying what prevents success then communicating these observations in an open and honest forum and dealing with them swiftly. He also focused on building a relationship with the Jet Propulsion Laboratory (JPL) to support their success, “because ultimately their success would mean our success,” he said. As Dr. Weiler noted, “Orlando would go around [JPL] and just talk to the engineers on the floor.”

Keeping the program geared toward success required paying attention to the details, which can be hard to do at the director level. “Orlando worked Mars twenty-four hours a day,” said Dr. Weiler. Figueroa relied on building trust and open communication to keep him abreast of the details and any problems that might arise. “Jim Garvin [program scientist], Ed Weiler [Associate Administrator for Science], and I worked hard on opening that communication channel,” he said. They constantly spoke about progress and issues and agreed on ways to address issues. Eventually, the program manager felt comfortable enough to call Figueroa at home if a critical issue came up. “I would commit myself to not overreacting to anything and allow the team to do their work, recognizing that they would do well in their promise to come back and give me the details,” Figueroa said.

His thorough involvement demonstrated an in-depth interest in the technical integrity of the mission and supported an ability to anticipate and act upon programmatic issues as they arose. The Mars Program Manager at JPL and the rest of the JPL team appreciated his genuine interest in their work and the support he provided during the inevitable challenges of the mission.

The Mars Explorer Rover mission launched Spirit and Opportunity in 2004. “At any given time in the last year before launch, if you would have told us we would have two successful launches, two successful cruise modes, two successful landings, and two successful missions in total, Orlando and I would not have bet one-tenth of a penny on that. We would have been very, very pleased landing one of them — that was mission success. We couldn’t have hoped for two,” said Dr. Weiler. Launching two rovers within days of each other had never been done before, and it was accomplished in three years, from conception to launch, in the wake of mission failures from Mars ’98.

“He excited a nation. He excited a world. How many federal employees get that opportunity?” said Dr. Weiler.

Now Figueroa has come full circle, returning to the center where he began his education in leadership. As Director of Applied Engineering and Technology at Goddard, he continues to apply what he learned throughout his career to his current job. He is now responsible for 1,300 employees and provides guidance on engineering and system technology. “It is a large organization with exceptional people, and it has a record of success that is hard to match. I want to build from that success to better serve the center and the Agency,” Figueroa said.

“There are certain principles that I have found in common [on my missions] that make things successful,” he said. “There is a sense of respect and integrity that opens the door for open and honest communication. People feel free to say whatever they feel may be getting in the way of the end goal.

“I talked about maintaining focus on the end game and recognizing that there are going to be very difficult challenges along the way. … To pretend that this is going to be an easy task along the way is foolish and unreal.

“Acknowledging the people who are actually doing the work is another very important part of leadership. I know the individuals I mentioned [as mentors] always took that very seriously, and I’m grateful for them taking the time. I hope I can do as good a job at being the mentor, the example, the leader, the focus that the people who embraced me when I started were. I am certainly committed to it.” 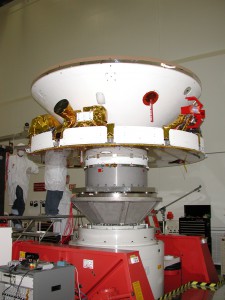